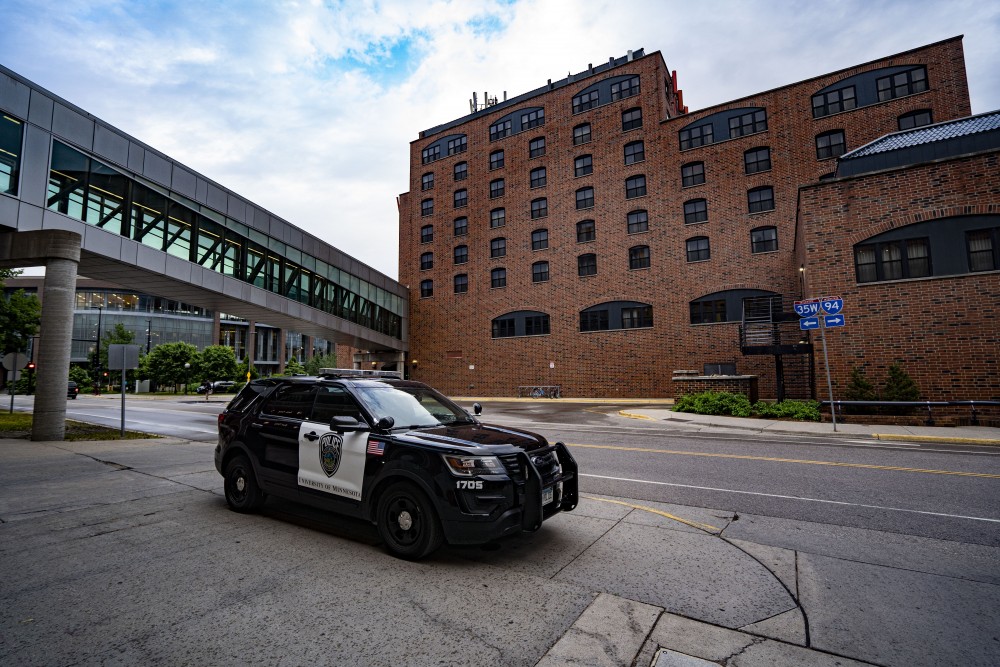 A University of Minnesota Police car is parked outside of the Graduate Hotel on East Bank on Thursday, June 21.

Amid Minneapolis’ growing population and dwindling recruitment numbers, city and campus officials are looking to different solutions to bolster their ranks.

Arradondo is calling for 400 more patrol officers by 2025, according to Star Tribune reporting. He told City Council members the current model is “broken,” and requires more sworn officers than the current number, of about 600.

“We are at a critical time within the MPD,” Arradondo said. “As our staffing needs have not been properly addressed over many years, it has resulted in our current MPD resources being strained to capacity — and quite frankly, we’re hemorrhaging.”

Slow response times erode the public’s trust in police and cause many residents to give up on calling for help, Arrandondo said. In 2018, MPD failed to respond to more than 1,200 “Priority 1” calls, or calls involving crimes like assaults, shootings or burglaries in progress, according to the presentation.

Adequate staffing can help repair that trust while allowing officers to work areas on foot, which would build relationships with residents and reduce crime, he said.

UMPD Lt. Erik Swanson said the department, like most other agencies, also wants more personnel because it enables law enforcement to be more proactive. While minimum staffing allows the department to perform basic duties like responding to calls, it limits its capacity for other services, he said.

“If you have a unique crime pattern that occurs, you don’t necessarily have additional folks you can put on that,” Swanson said. “Additionally, if you’ve got some things you want to do from an outreach perspective or community engagement, you don’t have additional people to do that.”

Currently, UMPD consists of 55 officers, whose jurisdiction includes the entire Twin Cities campus and more than 65,000 students, faculty and staff. Swanson said recruitment has become more difficult due in part to the lengthy process of joining the force, which requires testing and months in an academy.

To alleviate those concerns, UMPD began participating in Pathways to Policing last fall, a program that provides paid academic and law enforcement skills training to individuals in an effort to recruit diverse officers. Four new officers were hired as a result this spring, Swanson said.

“There’s some people, due to economics or finances, that make the choice not to do it because it’s too costly. This removes that barrier,” he said. “So we’re probably seeing some folks that we wouldn’t normally see.”

“Our goal is to make the campus safer by helping officers be more effective in their job by getting them the information that they need to respond to problems quickly,” O’Sullivan said.