The University's government relations team is tasked with building relationships and hurdling controversy, which some say could use improvement. 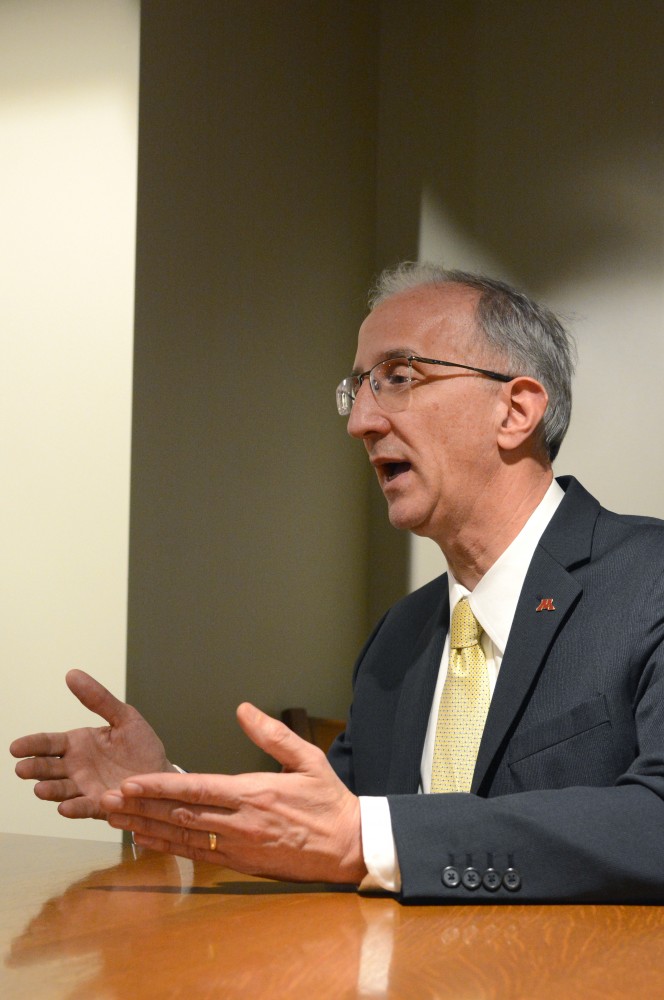 Matt Kramer discusses his new role as Vice President for University and Government Relations at the state Capitol on Wednesday, March 1, 2017.

Whether it’s pulling for state funding, building relationships with lawmakers or fielding concerns over issues like the latest football controversy, University lobbyists stay busy at the state Capitol during the legislative session.

J.D. Burton, director of University state relations, said he and other lobbyists serve as the school’s main contacts to legislators and Gov. Mark Dayton. Their duties include organizing advocacy, attending legislative committee meetings and working to draft bills.

Their main priority, he said, is to fulfill the University’s funding requests.

“There’s a lot of competing demands at the Legislature for resources and resources are scarce,” Burton said. “It’s our job to try and make an argument that’s persuasive to them to support the [University].”

Many requests vie for legislators’ attention, he said, and being respectful helps build trust.

But University lobbyists are “on the frontlines” when scandals like the recent sexual assault allegations in the football team occur, Burton said.

University lobbyists need to be transparent with legislators about what happened to avoid speculation, said Matt Kramer, newly-appointed Vice President for University and Government Relations.

“There are going to be no shortage of challenges, and what you do is you wake up in the morning, you put on your shoes and socks and you figure out how to be transparent, how to be honest,” he said.

But some lawmakers say school lobbyists dodge discussions of scandals, like the recent football one.

Sen. Jim Abeler, R-Anoka, said the lobbyists avoid the conversation out of embarrassment.

“They try to make the best of it, but it’s definitely had an adverse effect,” said Abeler, a member of the Senate higher education committee.

Rep. Gene Pelowski, DFL-Winona, said he’s only seen University lobbyists conduct outreach on scandals before the stories came out in the press.

The University’s government relations office has also struggled with turnover in recent years, said Pelowski, who sits on the House higher education committee.

“The University is paying a lot of money for what I would call erratic government relations,” he said. “There’s very little consistency and the University sort of lurches with them.”

The turnover can cost lobbying staff “institutional memory” of past sessions, Pelowski said, preventing them from learning from past mistakes.

Another roadblock the University has faced is not being as expansive as Minnesota State schools, he said.

“The best case is always made locally to legislators, and the University doesn’t have the number of senators and representatives that [Minnesota] State does spread throughout the state,” Pelowski said.

This is an area where the school could improve, Kramer said, and added there should be more media and marketing to rural Minnesota to emphasize the University’s statewide impact.

“We have to tell a multilayered story that is more than just … ‘here’s our budgetary request,’” Kramer said.

Abeler said his interactions with University lobbyists have been mostly positive, but they sometimes struggle to consider needs other than their own.

“They come in and tell their story and it’s a story that’s centric to what they want, and the legislators have to put it in the context of the whole big picture,” he said.