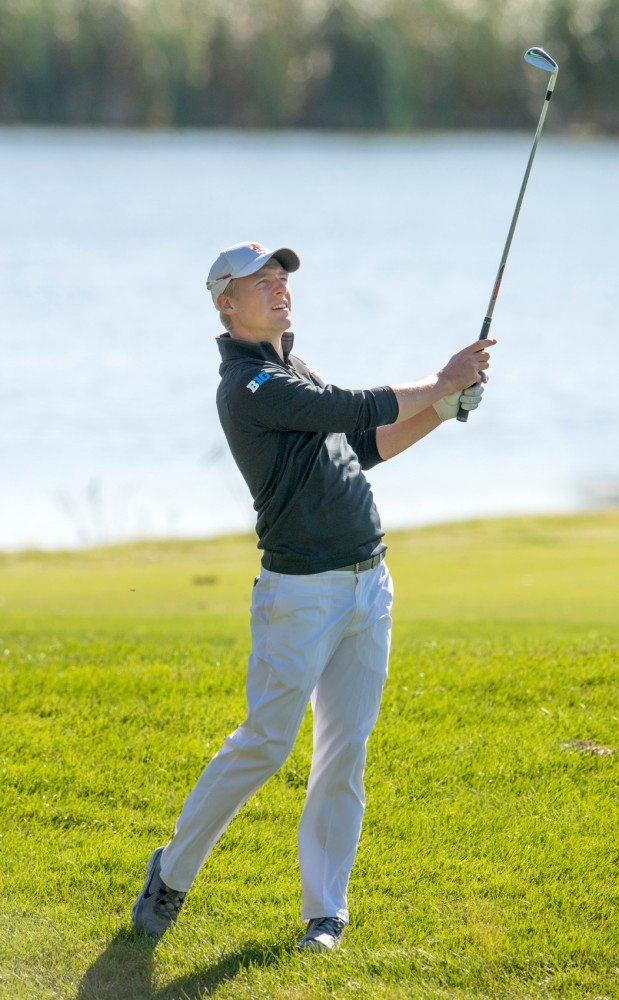 Runar Arnorsson plays at the Windsong Farm Golf Club during the Gopher Invitational on Sept. 13, 2015.

Minnesota started off the spring season strong this weekend.

The seventh-seed men took third at the Big Ten Match Play tournament, and the women placed sixth at the Florida State Matchup over the weekend.

“We really had a great weekend as a team,” said men’s head coach John Carlson. “To go down there and have our best finish in recent years at Big Ten Match Play was a huge start for us for the spring.”

The Gophers played their final match of the weekend against Iowa in the third place game, and beat the Hawkeyes 3.5 to 2.5 to take bronze.

In the opening round, Minnesota beat Nebraska to move into the quarterfinal round, then in that round the Gophers faced the two-seeded Michigan and beat them to move onto the semifinal round.

Minnesota ended up losing to the eventual tournament champion, three-seeded Northwestern, in the semifinal round.

Junior Runar Arnorsson had a big weekend for the Gophers, going 3-1 in his four matchups. He provided two important points Saturday, especially in the close win to clinch third place in the afternoon.

Carlson also liked what he saw out of junior Riley Johnson and senior Justin Doeden from the weekend.

The last time the Gophers went 3-1 at Big Ten Match Play was at the tournament three years ago in 2014.

The women’s golf team had a strong showing this weekend as well and finished sixth at the Seminole Match Up in Tallahassee, Florida.

“The improvement showed when we got outside,” said women’s head coach Michele Redman. “A lot of the mental training and some of the mechanical things and putting things that we worked on are working.”

One of the seniors on the team, Emie Peronnin, finished tied-for 17th over the weekend, her second top-20 finish this season.

“I didn’t finish top-10, so kind of some mixed feelings,” Peronnin said. “Top-20, I’m pretty happy with it, but a good first tournament.”

Peronnin was very consistent out on the course over the weekend, scoring 73, one over par, in the first round, and then two consecutive even rounds scoring 72 to a three round cumulative score of 217.

Following closely behind the senior was junior Sabrine Garrison who tied for 22nd place, with a total score of 219, three over par.

“We’re pretty close as a team,” Redman said. “The first two rounds proved that. We need to get a little more comfortable being in that position, and that comes with just a little more work in the short game and a little more mental work.”