Finnegans has contributed more than $150,000 to charities aimed at ending poverty. 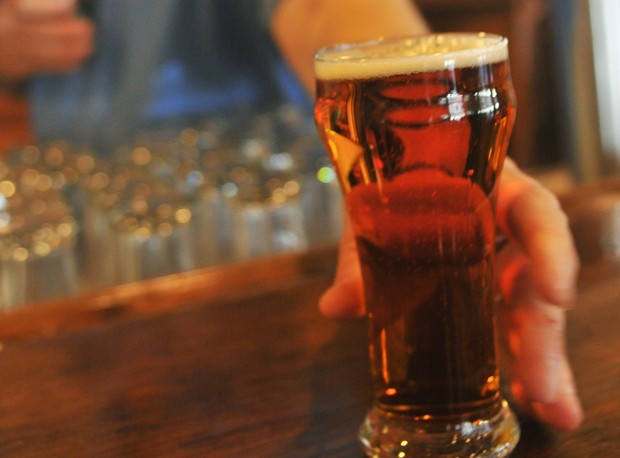 Volunteer brew guide Gene Neshek serves a patron a complimentary beer at the end of the Summit Brewery tour in St. Paul Saturday.

Ten years ago, KieranâÄôs Potato Ale beer brand was sold for a single dollar. Today, this beer has been recreated as Finnegans and is part of the regional effort to alleviate poverty. Jacquie Berglund, CEO of Finnegans, created the beer brand as a nonprofit organization whose profits go to charities across the Midwest. Since 2000, Finnegans has donated more than $153,000 to organizations dedicated to helping poor and homeless people. Berglund entered the beer industry in the late 1990s as the marketing manager for Kieran Folliard, owner of KieranâÄôs Irish Pub in downtown Minneapolis. While Berglund was working for Folliard, he created KieranâÄôs Potato Ale âÄî a beer whose profits were donated to charity. Shortly after, Berglund approached Folliard saying she was no longer interested in working for him. âÄúShe told me she was only interested in the nonprofit part of the company,âÄù Folliard said. Folliard then decided to sell KieranâÄôs Potato Ale to Berglund for $1. âÄúI want to get that $1 check framed one of these days,âÄù Folliard said. âÄúWhat sheâÄôs made of the beer, itâÄôs all her and the great company she has built.âÄù In 2000, Berglund changed the name of the beer to Finnegans and created two separate companies to make her plan work. âÄúFinnegans Inc. is the beer company that makes the money,âÄù Berglund said. âÄúFinnegans Community Fund is where we donate 100 percent of the profits from the beer.âÄù Three years later, Finnegans Inc. was profitable, and since then, more than $150,000 has been donated to Finnegans Community Fund. Finnegans is primarily a volunteer-run organization, with Berglund as the only full-time employee and a small number of part-time employees to help oversee both parts of the company. âÄúShe could have made an incredible salary in the corporate world, and she decided to go and do this and earn a fraction of what she could have in the big-time world,âÄù Folliard said. âÄúThe commitment she has made is incredible.âÄù Because Berglund was not interested in the beer industry as much as the nonprofit side, Berglund created a partnership with Summit Brewery in St. Paul to produce and manufacture Finnegans beer. âÄúItâÄôs not our recipe,âÄù Nate Siats, one of SummitâÄôs six brewers, said. âÄúJacquie created the taste and flavor, but we put the same care and consideration into brewing their beer as our own.âÄù Berglund said she tried a number of combinations before deciding on the right Finnegans flavor. âÄúWe wanted to follow the trend as light beer drinkers move into something more sophisticated, something a little heavier,âÄù Berglund said. âÄúItâÄôs not too heavy, not too hoppy. ItâÄôs a very drinkable beer.âÄù Once or twice a month, Summit brews the Finnegans mix using the same equipment as they do for their Summit line. âÄúFinnegans is only a small fraction of what we make, but itâÄôs a great mission and a great cause,âÄù Siats said. Siats said that of approximately 98,000 barrels of beer brewed at Summit each year, about 3,000 of those barrels are Finnegans. After being brewed, Finnegans beer is sent to restaurants, pubs and liquor stores in Minnesota, Wisconsin and North Dakota. Berglund said she loves being part of an economic engine that creates social change. The Community Fund is comprised of nonprofits around the Midwest whose missions are to alleviate poverty. Berglund said she became interested in community service because of her childhood experiences. âÄúWhen I was young, my family was poor, and I was brought up without a lot of money even though both my parents worked full-time,âÄù Berglund said. She said she spent time volunteering in a homeless shelter and was touched by people who were working up to four factory jobs and still remained homeless. âÄúLiving in the wealthiest country in the world, itâÄôs not OK that we have so many in our population who donâÄôt even have their basic needs covered,âÄù Berglund said. âÄúWeâÄôre all about ending poverty.âÄù In order to become part of the Community Fund, organizations must submit an application explaining their mission and why they deserve a grant. Twice a year, applications are reviewed and grants ranging from $500 to $2,000 are given to the chosen organizations. Finnegans also raises money and promotes its product by sponsoring events in Minneapolis such as 5K races and sampling events. These events are run by volunteers solely interested in FinnegansâÄô mission. âÄúThe bottom line is that itâÄôs an admirable idea and the beer really is good,âÄù Phil Platt, a volunteer for Finnegans, said. âÄúI wanted to be part of this greater mission.âÄù For each Finnegans beer sold, their Community Fund reaps the benefits. âÄúThe heart and soul and the passion that Jacquie has is what it comes down to,âÄù Folliard said. âÄúItâÄôs all about two of the best things: charity and beer.âÄù