At a special meeting Friday, the Board of Regents voted against renaming four buildings on campus named after controversial former administrators. 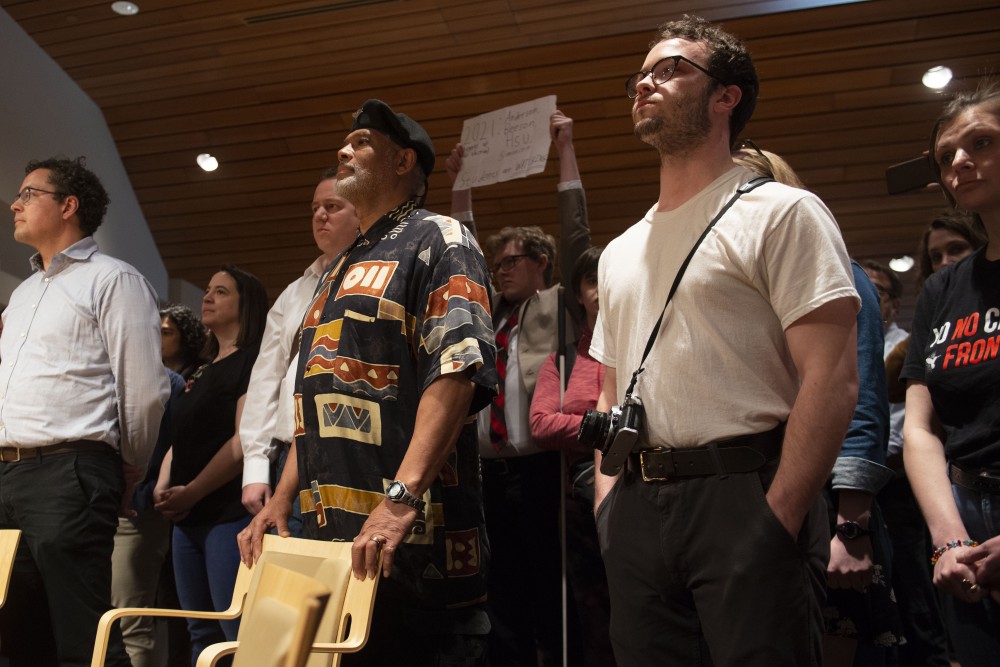 Professor John Wright faces the Board of Regents after receiving support from the crowd during the special session on Friday, April 26. The board voted against the renaming of four buildings on campus after more than a year of community discussion on the issue.

The University of Minnesota’s Board of Regents voted against renaming four campus buildings despite protesters commandeering a special meeting Friday afternoon to decry the resolution.

Regents voted 10-1 to reject renaming Coffman Union, Nicholson Hall, Coffey Hall and Middlebrook Hall — going against more than a year of student advocacy, a campus task force report and President Eric Kaler’s recommendations. Regent Abdul Omari was the only regent to vote against the resolution.

In a staggering move, John Wright, a longtime professor in the Department of African American and African Studies, stepped forward to address the board before regents took their vote.

Regent Dean Johnson, appointed as acting chair for the meeting, threatened to arrest protesters. However, protesters gathered around Wright in an attempt to shield him from arrest and Johnson eventually agreed to let Wright address the board.

Surrounded by a crowd of supporters, Wright gave an impassioned speech about the University’s history of discrimination and his own family’s experience under the tenure of President Lotus Coffman.

“History doesn’t repeat itself, but it does rhyme,” he said, quoting Mark Twain. He likened regents’ opposition to renaming to the racist policies his aunt and father experienced on campus.

However, board members took issue with renaming buildings, citing former administrators’ contributions to the University and the influence of the governing board at the time. Though discrimination on campus is reprehensible, regents said the University should address its complicated history in other ways.

“As a community, the University needs to move on and we need to move on in harmony,” said Regent Steve Sviggum.

Omari has been the only regent to express support for renaming. “If these were men who just simply did what their bosses told them to do, I don’t think they deserve to be on our buildings,” he said.

The regents’ decision comes after months of contentious debate about the University’s history of campus segregation and the actions of former administrators during the 1930s and ‘40s. However, some of the regents said they would have liked more time to talk with the University’s task force.

“In retrospect, I could have slowed the process to have allowed more time for the regents to provide input and for the task force to reply to your questions,” President Eric Kaler said.

The board unanimously passed a resolution directing incoming President Joan Gabel to develop “ongoing commemorations, educational activities, and/or permanent educational displays” in one or more buildings during the the 2020-21 academic year.

Regents also supported a statement commending the task force’s work, which has come under fire from some on the board. Regents voted 8-3 in favor of the statement, with Rosha, Hsu and Regent Randy Simonson dissenting.

“The University’s faculty is commended for contributing to this ongoing public discussion concerning our core values,” the statement reads. “Disagreement over the President’s recommendations from that report should not cloud the respect this Board holds for the quality of the Task Force’s work product and the integrity its members brought to bear on their academic inquiry.”

Rosha unsuccessfully tried to amend the statement, saying the board hasn’t had enough discussion about the University’s history and it is “premature” to make statements endorsing faculty.

“There are some of us who want to have a continuing dialogue about the report to get to a sense of what is accurate in the report and what is not accurate,” Rosha said.

However, Regent Omari pushed back on those criticisms. “One of the reasons why the task force will not engage is because of our behavior at the March meeting,” Omari said.

“In the way I observed, they were attacked,” he said. “I’m looking at two of my colleagues specifically.”

Several regents have criticized the task force’s findings, saying the group’s report left out evidence about the governing board’s influence and mischaracterized the legacies of former administrators. One regent, Michael Hsu, has called for an investigation, accusing the task force of committing “academic dishonesty.”

Those accusations have struck a nerve with many faculty members, who say regents have disrespected their work. At several points during the meeting, faculty responded to the board’s discussion with cries of “that’s not true” and “wrong.”

The task force has stuck by its 125-page report, which faulted presidents Lotus Coffman and Walter Coffey, Dean Edward Nicholson and Comptroller William Middlebrook for their roles upholding segregation on campus and surveilling students.

Board Chair David McMillan was absent from the meeting after being hospitalized with a serious infection, according to Vice Chair Regent Ken Powell.

Throughout the meeting, Johnson struggled to quell the vocal crowd, packed with students, faculty and other supporters of renaming. But the meeting quickly became a raucous affair, with audience members shouting, groaning and hissing throughout the discussion.

At one point, several audience members, including “A Campus Divided” curator Riv-Ellen Prell, shouted over Regent Darrin Rosha when he expressed concerns about the task force’s characterization of former administrators.

Mishra said that students are going to continuing pushing for renaming.

“I think [renaming] will keep going long after I’m gone, long after everyone in this room is gone until the buildings are renamed,” she said. “To me it’s a when, not if.”

Niamh Coomey and Dylan Anderson contributed to this report.