Alongside national rallies, UMN students stand up for menstrual equity 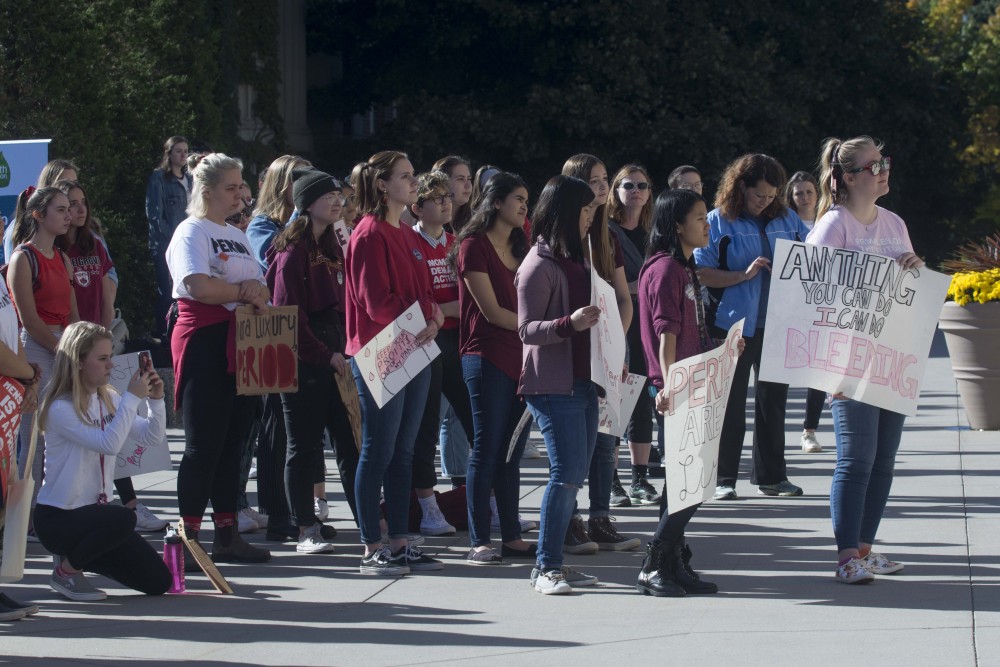 Supporters gather in front of Northrop for the first annual National Period Day on Saturday, Oct. 19.

A red and pink wall formed around the front of Northrop Plaza as supporters of menstrual equity and education filed in for the first annual National Period Day on Oct. 19.

Passersby could hear cheering and chants halfway down the mall as the rally basked in one of the last warm, sunny afternoons of the season. The rally was one of many happening around the country on Saturday.

A group of about 14 speakers championed issues like menstrual equity, the end of the ‘tampon tax,’ strengthened education on menstruation, better support for sufferers of endometriosis and an end to the stigma surrounding menstruation and menstruators. Speakers included various supporters of the Period at University of Minnesota student group who helped spearhead the Period Day Rally on campus, an event which was sponsored by Seventh Generation and co-hosted by 19 other groups.

Period at University of Minnesota is a subsidiary of an international nonprofit, Period. Inc., that works to fight for menstrual equity, or the equal access to menstrual products for everyone, and the end of period poverty through education, advocacy and service.

Samantha Holtz, president of the Period chapter at the University, contextualized the impact menstruation can have on a menstruator’s educational career.

“There’s a statistic … that one in five girls have to miss class due to the fact that they don’t have access to menstrual products within their schools,” Holtz said. “This is an example of what we call period poverty. Menstrual equity is the fight against period poverty.”

The group advocates for environmentally-conscious menstrual practices, something they argue involves the use of products that are safer than traditional tampons.

“Tampon companies and menstrual product companies don’t have to disclose what are in common or popular menstrual brands,” Holtz said. “That’s kind of a scary thought, that you don’t often know what you’re putting in your body.” Jonathan “B” Burke is the director of education at the Period chapter on campus. As a non-menstruator, they are considered to be a non-menstrual ally which has impacted their experience and involvement with the group. They said they felt “weird” being in an educational role due to their lack of personal experience with menstruation.

“When I first got involved I was a little bit hesitant to go all in just because I didn’t want to fill in too much of a space in a movement that centered around menstruation,” Burke said. “When I started learning more about … the menstrual movement … I started to realize that menstrual equity really is gender equity and as a person that … believes in gender equity, I thought that being involved with this movement would be a really awesome way for me to get involved.”

The group faces many hurdles in its race to equity, the biggest of which, they believe, is stigma.

Emma Pringnitz, Period at the University’s director of marketing, said resistance from non-menstruators is especially challenging for the group to deal with.

“Whenever there’s a stigma it’s really challenging for people to talk about it, especially if they’ve never considered the issue before,” Pringnitz said.

Ellie Stimmel, president of the Students for Reproductive Freedom — one of the 19 groups that co-hosted — said that awareness to the cost of menstrual products could be key to understanding the issue at hand.

“A lot of people have to choose between paying for food or paying for tampons,” Stimmel said. “A big focus of what the Period movement is [is] just making everyone aware that these products are so expensive.”

Editor’s note: Ellie Stimmel is a social media intern for the Minnesota Daily.