After upper-level tap classes at the University were cut more than a year ago, students started a group to learn on their own. 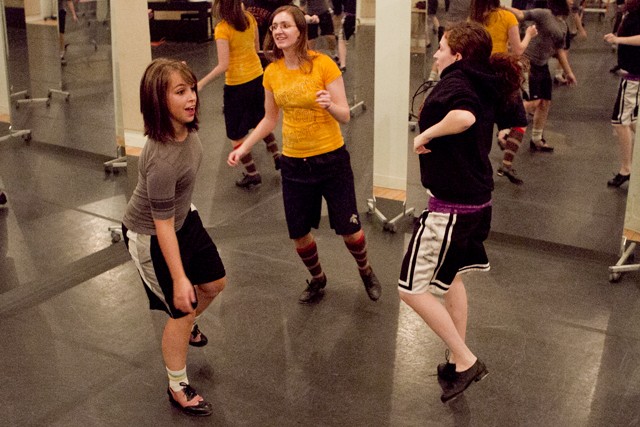 When Stephanie Hornung registered for classes this year, she added tap dance level three to her fall schedule, the same class she has taken for the past two years.

She does not repeat the class because she has failed; she repeats it because there are no higher classes to advance to âÄî tap classes beyond level four have been cut from the University of MinnesotaâÄôs schedule.

At the end of her first year in 2008, Hornung, a student in the College of Science and Engineering, had completed levels three and four for the first time and intended to advance to levels five and six. That was when her instructor informed her that those classes had been cut.

An angry Hornung, along with her fellow dance classmates, wrote a letter to the dance department with multiple signatures trying to get them to reinstate the upper-level classes. Their request went unanswered.

“I donâÄôt want the sport to die,” Hornung said.

After a year repeating the same classes, the dancers took matters into their own hands and started a tap dancing group of their own: MinnesoTap.

“We are providing an education that the University canâÄôt,” Hornung said.

Thursday night marked MinnesoTapâÄôs seventh practice, and earlier that week the group held its first performance. Each practice begins with a freestyle warm-up in a circle. Then each of the groupâÄôs 10 to 15 members take turns learning and teaching tap combinations that they have either choreographed or learned throughout their dancing careers.

MinnesoTap President Kathleen Burnell called this group mentality “an opportunity for us to get on the creative side of the art.”

Typically, University dance classes are held in the Barbara Barker Center for Dance on West Bank, but because of the easily damaged wood flooring and the roughness of tap shoes, tap students use the PeopleâÄôs Center, University dance director Ananya Chatterjea said.

This wood flooring is covered in Marley Flooring, a rubber casing that canâÄôt be damaged by tap shoes, Hornung said.

Chatterjea blamed the elimination of upper-level tap classes at the University on the current budget crunch and limited resources available to the dance department.

“There are only three studios,” she said. “There is no practice room for anyone.”

She also said that she wished there was more space to bring back the upper-level classes, but with budgets the way they are she would just be happy to keep what they already have.

To Burnell, it makes no difference.

“It would be great to be getting credit for this,” she said, “but IâÄôm going to be tapping either way.”