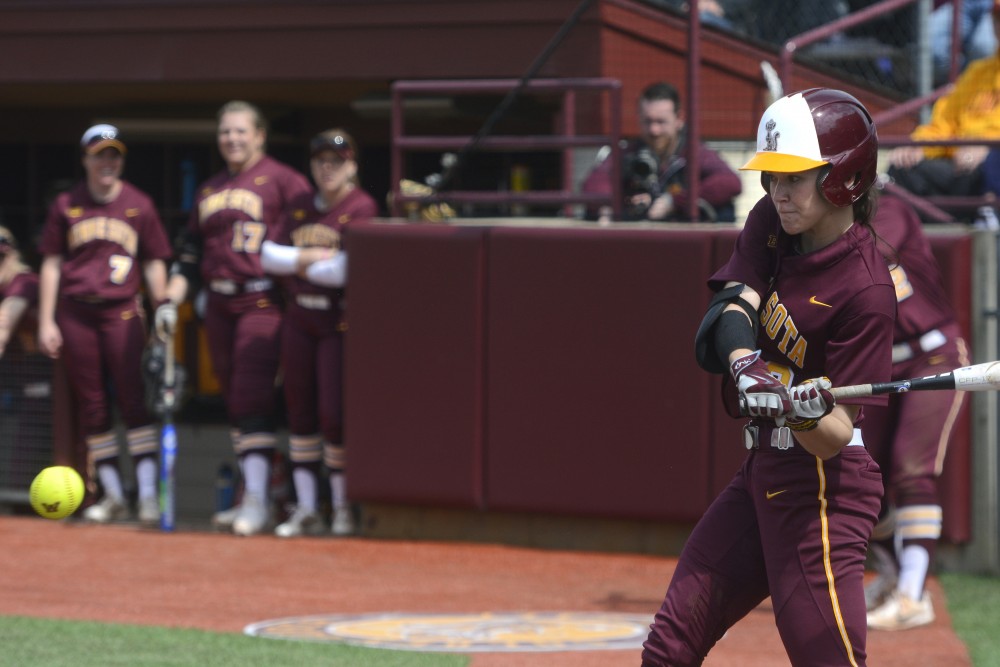 MaKenna Partain swings at a pitch during a game against Northwestern on Saturday, April 15, 2017 at Jane Sage Cowles Stadium.

The Gophers got back into the win column this weekend.

No. 22 Minnesota (10-4) rebounded from last weekend’s 0-4 record to win five games in a row at the Diamond 9 Citrus Classic in Orlando, Florida.

“We’re still trying to get better, but our confidence hasn’t wavered,” head coach Jamie Trachsel said. “Coming out here, I think we had some great efforts. We actually out-executed everyone we played.”

The Gophers kicked off the weekend Friday against a team that kept it close and showed off its ranking.

No. 23 Kentucky went out to a 1-0 lead after the third inning, but the bats came alive later in the game. The Gophers scored two runs in the bottom of the fourth inning as the team prevailed in the ranked matchup 2-1.

Freshman Alex Velazquez was the pinch hitter in the game against Kentucky and she was the catalyst for the offense. The first hit of her career, her only one in the game, brought in the two runs in the fourth.

“It felt very exciting,” Velazquez said. “I was told to go in and hit. Going through my mind I was like ‘just stay calm, do your job and try to score at least one person.'”

Minnesota’s second game would buck the trend of bats heating up late.

The Gophers scored in five of the seven innings in their 13-3 victory over South Alabama on the back end of Friday’s double header. Minnesota’s highest-scoring frame came in the fifth inning, when the team got five runs across the plate.

All nine batters got to the plate in the fifth — infielders Danielle Parlich and MaKenna Partain got two RBI each in the inning.

“We’re still trying to get everything going when it comes to [offense],” Trachsel said. “It takes every area. You have to win two of the three areas generally to win the game.”

On the flip side of offensive prowess on Friday’s late game, Saturday’s double header saw Minnesota give up one run between the two games. The Gophers beat Bradley 4-0 in the first game and swept the day with a 5-1 win over Lehigh in the second.

Sophomores Amber Fiser and Carlie Brandt pitched in games one and two, respectively. Between the two of them, they allowed three hits in both games.

“As the game goes on, I have more confidence in my defense behind me,” Fiser said. “If [the batter] puts the ball in play, I just know that my defense is going to make a play.”

The game was tied 1-1 after seven innings, but it took some late-game heroics from Partain to get the victory after the eighth inning. Partain also was the last run of the game to make 5-1.

Minnesota had the bases loaded thanks to two bunts and the stage was set for Partain. She added to her RBI this weekend, hitting a double that scored all three of the Gophers base runners to break the tie.

Once Fiser closed out her nine-strikeout game with the bases loaded for Duke, Minnesota’s undefeated weekend was sealed.