The division will take over existing community involvement programs. 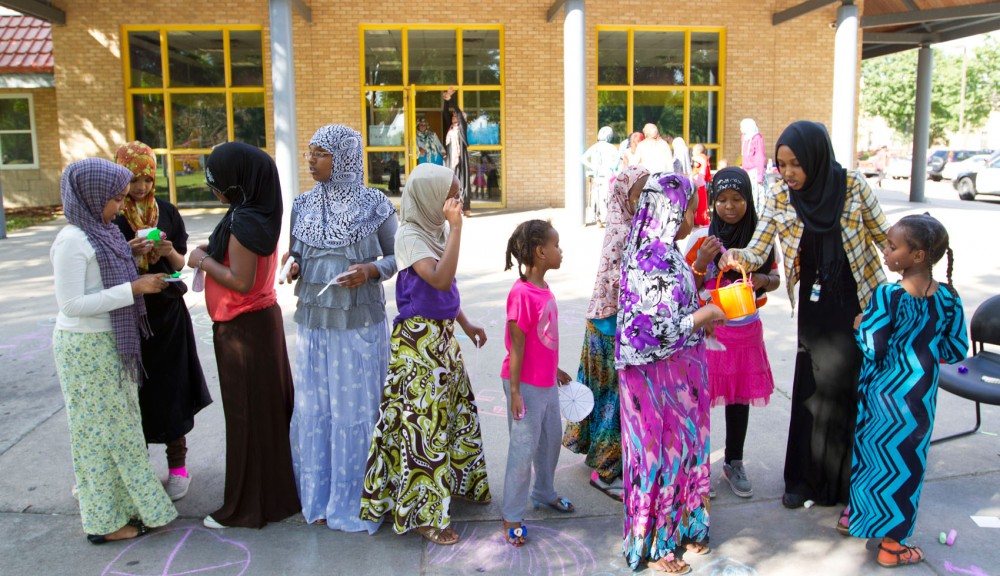 Cedar Riverside Youth Council member Kowsar Abdi, second from the right, supervises the chalk drawing station Monday outside the Brian Coyle Center. The CRYC organized the field day Monday as part of a week of events that for Youth Awareness Week.

In an effort to ease its relationship with the city’s communities, the Minneapolis Police Department has created a new division to run all of its outreach initiatives.

“We’re putting it under one command so we can stay on top of those issues and make sure that we are out there providing for the community,” said Commander Charlie Adams who heads the new division

Community police centers, like the Cedar Riverside/West Bank Safety Center, will be part of CCA, and new initiatives will be added as time passes.

Adams said the Cedar Riverside Safety Center is particularly important because it serves the East African community in the area and keeps it engaged with the police department.

The MPD recently released two videos, one in Spanish and the other in Somali, answering concerns over the department’s immigration policies, which state that police officers cannot openly question people’s immigration status and cannot undertake any action to find out a person’s status.

The new division will build upon existing programs like the procedural justice program, which aims to teach citizens and police officers about justice procedures.

Additionally, it will create new initiatives in correspondence with the police department and community organizations.

The department is looking into installing two kiosks in North and South Minneapolis that would allow people to submit complaints easier, Adams said.

The department is also aiming to create a committee of citizens and police officers that would meet every month and go over policies and new programs that could be implemented.

“We would always have fresh ideas coming through that we can hopefully implement in our police department to make the community feel more trusting of what we do,” Adams said.

Having a division within the police department that deals entirely with community engagement and outreach is something that hasn’t been attempted before, Adams said.

Ward Six Council Member Abdi Warsame said while the new division is a step in the right direction, there needs to be consistent cooperation between the community and police.

Minneapolis’ 2017 budget allocates $1 million to community policing efforts, and Warsame authored an amendment which allocates $100,000 of the total to Phillips West and Ventura Village neighborhoods, he said.

Warsame said the initiative puts the power in the community’s hands, allowing them to prioritize what security measures or changes are important to them.

“People need to be heard,” he said.

Michelle Phelps, a sociology professor at the University of Minnesota, said many police outreach initiatives have developed in recent years.

But the efforts can be traced back to the 1960s and the Great Society program, under President Lyndon B. Johnson, which looked to create alternative forms of government and municipal procedures.

So, she said, some of the MPD’s initiatives, like the procedural justice group, implicit bias training and the new division, are “somewhat historically unique.”

Community engagement has been essential in police conduct since the inception of police forces, Phelps said, and they do have an effect on the community.

“If people trust police, then they are more likely to obey the law and call the police for help,” she said.