A new Johnny and June 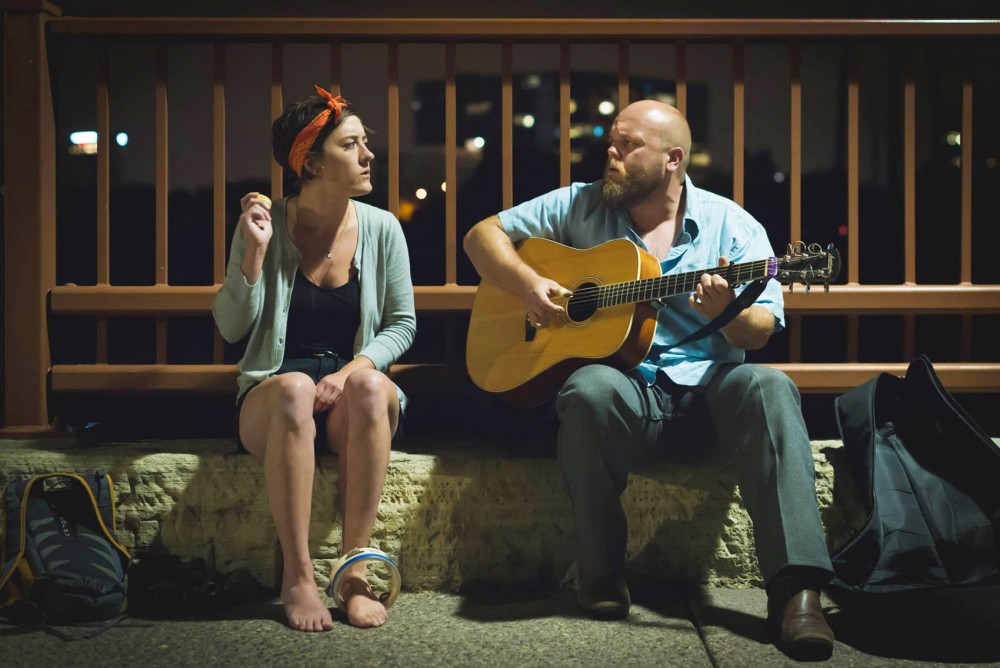 The members of The Last Jackson play on Minneapolis' Stone Arch Bridge.

Nate Jackson, a founding member of the Last Jackson,  struggled to write duets before he met co-founder and vocalist Taylor Lorell at a local open mic night.

“We started playing, and then a couple months later we realized that we didn’t just sound good together, we wanted to be together,” Jackson said.

The Last Jackson is an Americana, finger-picking folk group, Lorell said. They find their inspiration in the roots of Americana, and their music resonates with groups such as the Civil Wars and the Tallest Man on Earth, Jackson and Lorell said.

“We’re even like a Johnny and June,” Lorell said, referring to the legendary love story of Johnny Cash and June Carter Cash.

The band’s songs have a gritty edge to them, and they aren’t sappy, despite their romantic nature.

“A lot of people think of love songs as super melodic and sweet, and ours are whiskey-drinking love songs,” Jackson said.

The chemistry between Jackson and Lorell is obvious during live performances. When their eyes lock, the show is ready to roll.

“We find that we sound best when we have really great eye contact on stage, and if you come see a performance or hear us on our album, you can tell we’re singing to each other,” Jackson said.

The Last Jackson finds that their music resonates with all ages.

“We’ve had people that were 80 years old dancing in front of the stage. We play at farmers markets where kids are jumping around and having a good time,” Jackson said.

Jackson knew he wanted to play music since he was a teenager.

“When I was 16 years old, I picked up my first guitar. A week later, I wrote my first song,” he said.

Lorell wasn’t quite as enthusiastic early on. She grew up as a classically trained pianist, unwillingly sent by her mother to voice training camps.

She said she used to hate her voice, but that apparently changed, as she eventually took up songwriting.

“I’ve always been a writer, and when I got to college I started writing more. I picked up the guitar [I] had when I was younger and never used, and I stated figuring out how to play,” she said.

Music became her much-needed escape from the monotony of classes and training that she’d been looking for, and one that she began to welcome instead of dread.

Lorell and the rest of the band have come a long way since their teenage years.

On Nov. 25, the Last Jackson will release their newest EP at the Icehouse in a show with the Last Revel. They took a unique approach to the recording of their EP.

“We didn’t want a highly polished studio version of our music, and we decided to get into the studio and literally record an album live in four hours.” Jackson said.

Jackson said their EP evokes a sound reminiscent of hearing music on a front porch. “Or walking into a juke joint and watching a guitar player stomping their feet on the stage because they’ve got to get something out of their system,” he said.

What: The Last Jackson EP release with the Last Revel