Noname brings warmth and a fresh beat to First Avenue

The Chicago-native wowed with her thought-provoking lyrics, but ultimately struggled with crowd engagement. 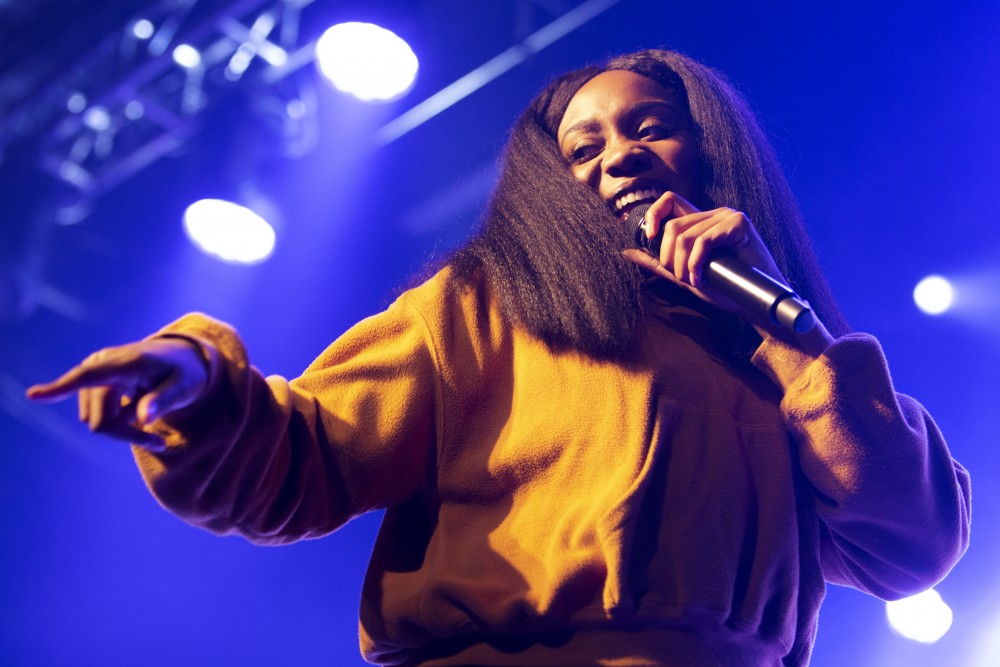 Noname performs at First Avenue on Saturday, Jan. 26 in Minneapolis.

Basking in the luminescent glow of a neon “Room 25” sign, Noname embraced the screams and cheers of an enthusiastic First Avenue crowd on Friday night.

“Minneapolis! What the fuck is up?,” she yelled before wowing fans with a unique blend of jazz, rap, hip-hop and spoken word.

Armed with a full band and three backup singers, the rapper ordered the audience to join her in the music-making.

“This is going to be a good show,” she shouted. “Make some noise!”

“Y’all really thought a bitch couldn’t rap huh?” she jabbed. “Maybe this [is] your answer for that.” Juggling topics like religion, politics, success and race, Noname builds off themes in her earlier album without being repetitive or dry.

Songs like “Window,” “Regal” and “Ace” were all big hits with the crowd. If you weren’t singing along with their choruses, you were certainly swaying and grooving just as hard as she was.

“The first time I played in this hall I opened up with Ms. Lauryn Hill,” the artist said, looking around the packed concert venue. “Now … what the fuck!”

Although Noname left a majority of the audience in the dust with her fast-paced lyrics, the crowd seemed largely content with just listening.

However, this made it difficult for Noname to keep up crowd hype in-between fan favorites and well-known chorus lines.

At some point in the show, she stopped mid-song to adjust her microphone volume.

“Can you guys hear me rapping my ass off?” she asked. “Let’s try this again.”

While it’s obvious Noname has incredible talent and provides a new and refreshing sound, she couldn’t rally the same engagement that usually accompanies bands playing a large-scale venue.

Unlike her opener, Elton, who was able to foster an immediate connection with the crowd and capture the stage with his dynamic energy, Noname seemed to simply perform.

A deeper performer-audience connection never formed (despite several efforts to get the crowd to sing along).

At times it seemed Noname was almost overshadowed by her backup singers — especially when Chicago artist Blake Davis hit some astounding high notes on some of the more popular tunes.

Noname also left the stage before the last song was finished … and did the same thing during her encore song.

Although she probably did this to showcase her incredible backup, this gesture took away from the rightfully deserved focus on Noname herself. After all, the crowd turned out to see Warner. Her stellar band was just an added bonus.

All in all, Noname provided some much-needed warmth and rhythm to a cold Minnesota night.

Super-fans were no doubt impressed by the performance, but viewers less familiar with her were probably missing out on that immediate connection with the artist.

Next time she visits, I hope Minneapolis will be ready for her.