Minnesota scores its way to sweep over St. Cloud State

The Gophers defeated the Huskies 6-2 on Friday and 4-1 on Saturday. 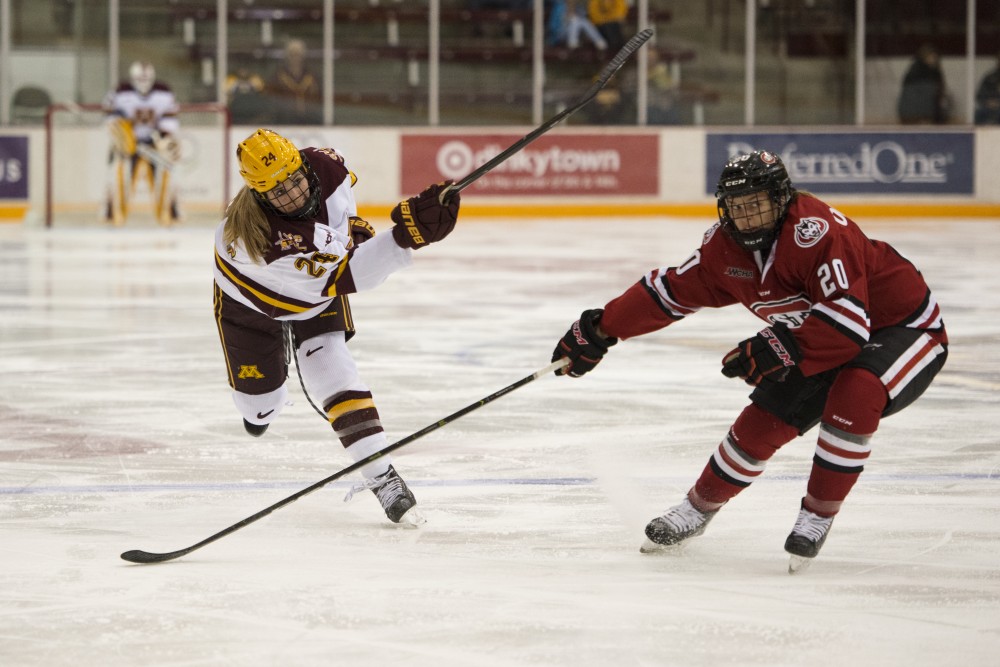 Left winger Nicole Schammel opened the scoring for the Gophers at the 1:19 mark of the first period off an assist from defender Olivia Knowles. It was Schammel’s second goal of the season and the first time Minnesota scored the first goal of a game since beating Mercyhurst on Sept. 30.

“Everyone was goal scorers on our team,” Knowles said. “[The defenders] are on board this year.”

Center Taylor Heise scored twice in the first period. Heise beat Huskies goaltender Emma Polusny at 12:22, after Polusny got caught out of position. At 18:51 of the period, while the Gophers were on a power play, Heise deflected a shot by defender Emily Brown for her third goal of the season.

Heise said Minnesota came together to generate scoring chances. The Gophers had 50 shots on goal.

“I was grateful to play with an amazing group,” Heise said. “Everyone [had] a smile on their face. Putting the puck in the net makes it even better.”

St. Cloud State cut Minnesota’s lead to 3-2 in the second period. Head coach Brad Frost said after the Huskies scored twice, he told the Gophers to return to the formula that brought them success in the first period.

“You never want to give up two to make it 3-2,” Frost said. “Our response and pushback was good to be able to extend the lead and get those two right back before the end of the period and get up by three.”

“We all have the mentality of all gas, no break,” Sarah Potomak said. “We try not to let doubt creep into our minds and we know what we can do. We stuck together as a team, which is something special about this group.”

Goaltender Alex Gulstene stopped 16 of 18 St. Cloud State shots for her third win of the season. Gulstene has played in the Friday game of each series this season and has allowed two goals per-game in each.

Just like on Friday, the Gophers had a quick start.

Minnesota defeated St. Cloud State 4-1 on Saturday at Ridder Arena. The Gophers remain undefeated and have scored at least four goals in five of six games this season.

Left winger Emily Oden scored twice in the game — they were the first goals of her collegiate career. It was the fourth game this season in which Minnesota had a player score multiple goals.

Goaltender Sydney Scobee stopped five of six Huskies shots for her second win of the season. Minnesota’s tandem of Scobee and Gulstene has yet to allow more than two goals in a game.

“The players are confident,” he said. “They’re all doing a great job.”