Krstanovic won his first career victory in the No. 2 singles spot against Sacramento State. 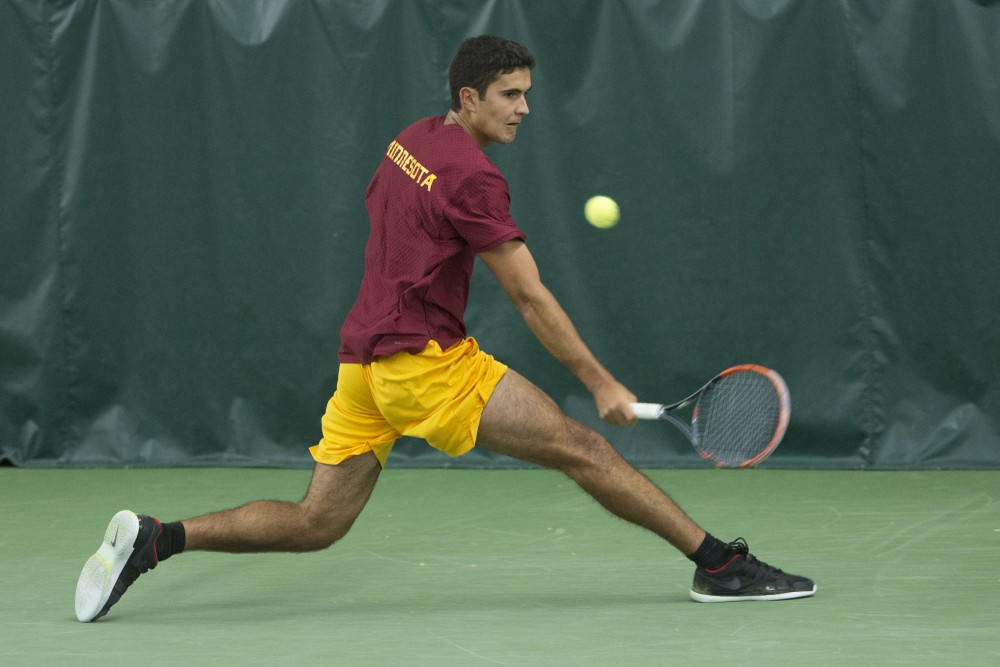 Junior Josip Krstanovic returns the ball during his singles match at the Baseline Tennis Center on Friday, Feb. 2.

Junior Josip Krstanovic ran back and forth, breathing heavily as he chased after tennis balls at practice as the Gophers prepared for the upcoming match on Saturday against their rival, Wisconsin.

Krstanovic has had to hustle in his junior season and now he’s earning a bigger role with the team.

Two weeks ago, in a dual match against Sacramento State, Krstanovic was asked to play in the No. 2 singles position after senior Felix Corwin was a late scratch from the lineup. Krstanovic went on to capture his first career victory in that spot. To him, it was no surprise.

“All of the players are really similar, there is no difference between two and four,” Krstanovic said. “It is just being confident in yourself that you can play in whatever spot you want.”

Krstanovic has played in multiple singles spots this season. In the first dual meet of the spring season, he played in the No. 4 singles spot. However, he went between the five and six spots after that.

His sophomore season saw a major turnaround in terms of his singles record. He went 14-8 that year, which was a nine-victory improvement from his freshman season.

This year, he hopes to continue building on the early success he found in that match against Sacramento State.

“The difference between sophomore and junior year is not too much other than I feel more experienced,” Krstanovic said. “We will see what the season brings and if I can bring that experience to the court.”

Krstanovic is one of five Eastern European players on the team. He grew up in Croatia, where he fell in love with the game of tennis. He won three Croatian national championships in doubles before coming to Minnesota, as well as playing in European Junior Championships and International Tennis Federation matches that helped him raise his game to where it needed to be to for college.

He wanted to continue to play tennis but realized he wasn’t going pro, so he decided to look at colleges in America. Krstanovic visited Minnesota in the summer, which is different than most potential players, who come during the season. Head coach Geoff Young spent the day showing him around.

“I thought that we really connected and I really wanted him on the team because I felt like he was someone that could really maximize his potential,” Young said. “I believe in the power of a positive attitude and someone who faces fears and he is doing that and being rewarded for it.”

Krstanovic said it has been nice that there are multiple guys on the team who can speak his language. He said if he ever feels homesick, speaking his native language with his friends helps him get over it.

Now that he is in his third year, he is looked upon as a leader on the team. The work ethic he has, which includes running back and forth in a conditioning drill, is something his teammates will take from him.

“You can see how guys do it and see what they do to succeed and trust the process,” freshman Vlad Lobak said. “Joe is a hard worker on and off the court … and sets a good example for us.”