Two former Gophers are ready to fight for women’s hockey gold in Vancouver. 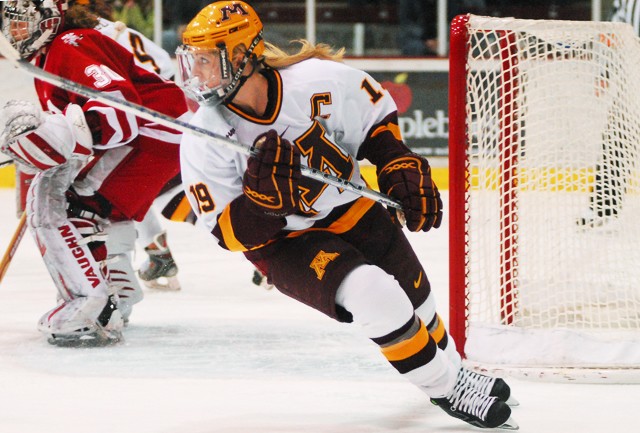 Vancouver, B.C. âÄî With opening ceremonies of the 21st Winter Olympics only days away, two Minnesota women are preparing to step on the ice against the best players in the world. Gophers womenâÄôs hockey alumnae Natalie Darwitz and Gigi Marvin will face China on Feb. 14 in the opening round of the Olympics in Vancouver, British Columbia. Both athletes said they are proud to be representing the country and the University of Minnesota during the Olympic Games. âÄúIâÄôll always be a Gopher,âÄù said Marvin, a 2009 University graduate. âÄúI hope that all the Gophers and my former teammates and everyone that I know back home will be cheering us on âÄî IâÄôll be paying attention to the games they have going on.âÄù The Marvin family will make the trip from Warroad, Minn ., to watch the action unfold. Marvin said the whole experience will be a âÄúhuge momentâÄù in her hockey career. Darwitz, Team USAâÄôs captain and third-time Olympian, said she wants to balance the knowledge sheâÄôs gained from past Olympics with the excited but nerve-wracking âÄúchillsâÄù factor first-time Olympians experience. Gophers womenâÄôs head coach Brad Frost has coached both Darwitz and Marvin and said the two have always been tough competitors. âÄúIt was a pleasure first and foremost,âÄù Frost said of coaching Darwitz. âÄúSheâÄôs just an incredibly intelligent hockey player. SheâÄôs got a fantastic head for the game. Obviously, her skills are second to none.âÄù He said the Gophers program tries to recruit players who will be ready to bring their game to the next level. âÄúWe always want to recruit great people who are great hockey players,âÄù Frost said, âÄúb ut also people that also have that dream and desire to play even beyond here at the University of Minnesota and play for their Olympic teams or their national teams.âÄù Controlling expectations To avoid the hype swirling around the games, Team USA practiced in Colorado Springs, Colo., before making the trip to Vancouver on Sunday. Despite withholding from the Olympic atmosphere, both players saw high-level competition recently in representing Team USA as part of the Qwest Tour , a 10-game, nine-city tour across the U.S. The team finished with a 7-3 record. The three losses came at the hands of Team Canada in close games in Denver, St. Paul and Spokane, Wash. Across the border, the team did not fare any better during the 2009-10 season, losing to Team Canada in Victoria, Calgary and Ottawa. The losses to Team Canada paired with the momentum from Team USAâÄôs most recent game, a 5-1 exhibition victory over Team Finland on Feb. 4, will fuel the team heading into the Olympics. Although the head-to-head matchups led to Jan. 31 AP Olympics predictions with Canada projected to finish with gold ahead of the U.S. and Sweden earning bronze, Darwitz and Marvin said they are not fazed by the underdog status. âÄúItâÄôs in Canada; the Canadians are favored [and] expected to bring the gold. A lot of people will already be writing about it,âÄù Marvin said. âÄúWe canâÄôt control who picks who. ItâÄôs going to come down to a game of hockey âÄî thatâÄôs what weâÄôre preparing ourselves for.âÄù For Marvin and the rest of Team USA, the game is going to be won on the ice, not in the pregame headlines. âÄúIt comes down to whoâÄôs going to want it; both teams are incredibly skilled,âÄù Marvin said. âÄúItâÄôs a matter of actually playing the games and seeing the outcome.âÄù Marvin said she is confident that she and the rest of the forwards will control what they can âÄî mainly, scoring goals and setting up her teammates. The team is going in energized for the game against China with a do-or-die mentality. âÄúEvery single game at the Olympics matters. YouâÄôre not taking a shift off. It is a one-time deal,âÄù Marvin said. Marvin said she expects Team USA to push the pace on opponents with a high-speed game. âÄúI donâÄôt think it will be too difficult for anyone to get excited for the games. ItâÄôs going to be a blast playing out there,âÄù she said. Darwitz joins her teammate in looking forward to getting on the ice and moving past the media hype. âÄúItâÄôs important to take it one game at a time. Once we get there [from Colorado Springs] we start thinking about that first game against China. That mentality is really important for us. Every team is going to fall into place when it gets to the Olympics.âÄù