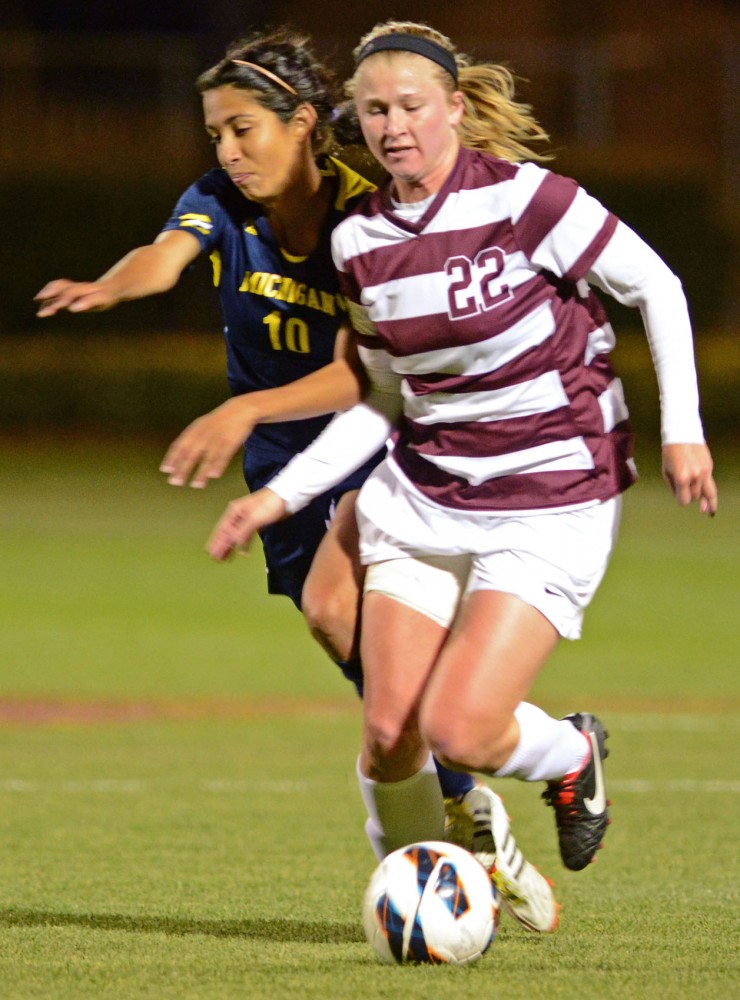 The Gophers headed to Bloomington, Ind., earlier this month and left with a loss.

On Wednesday, they’ll play a different team with different stakes in the same place.

No. 4-seeded Minnesota will draw No. 5 Illinois in the first round of the Big Ten tournament.

“We’re going in there excited to be there, excited to be the No. 4 seed — but definitely not satisfied,” head coach Stefanie Golan said. “The team wants to go pretty deep, and we want to earn an NCAA tournament bid.”

Minnesota and Illinois finished the regular season with identical 6-4-1 conference records, but the Gophers defeated the Illini earlier this season.

Minnesota came out strong Oct. 12 against Illinois and won 3-0 behind two goals by sophomore Taylor Uhl and one by senior Tamara Strahota.

“It’s always tough to beat a team more than one time,” Golan said. “You have that confidence that you can [beat them], but they also have a little bit of an edge because you’ve already beaten them. It’s kind of their opportunity to avenge that loss.”

The Gophers are coming off two road wins, and they have scored nine goals in those two games.

“Especially because we’ve scored a lot of goals in the last two games … confidence in the offense is going in high,” Strahota said.

Junior Lauren Bauer said the Gophers need to play their best to win.

“We can’t have an off day,” Bauer said. “It’s really [about] how we play, how we come out. We have to come out with the best we have. If we play our best, then I know we’ll win.”

Like with basketball, the team that wins the Big Ten tournament earns an automatic bid to the 64-team NCAA tournament.

The Gophers are hoping to make enough noise to earn an at-large bid if they don’t win the tournament.

Bauer said the team has to “play like you’re never going to play again” because it doesn’t know if it will play in the NCAA tournament.

If Minnesota advances, it will play the winner of the game between No. 1 Penn State and No. 8 Iowa on Friday.

The Gophers lost to Penn State 4-3 and tied Iowa 0-0 earlier in the season.

Barring an upset win by Iowa, if Minnesota advanced to the second round, it would play Penn State, the third-ranked team in the country.

Big Ten tournament games are every other day, and Strahota said “whoever can take care of their body better” will be in a good position.

Golan said she thought that if the team won its first two games, it would guarantee itself an at-large bid to the NCAA tournament.

“Winning the first game puts us in a pretty good position, but then it’s going to depend on a lot of other things,” Golan said.

She said at-large bids will depend on other games around the country, but if Illinois and Minnesota were on the bubble, for example, and the Gophers beat the Illini twice, that would make a convincing case.

“I’m not sure what they’re going to be looking at for the at-large bids, but I’m hoping that the Big Ten can get four or five bids this year,” Golan said. “If so, I think we’re in pretty good shape.”

Last year, Minnesota lost in the second round of the Big Ten tournament to Penn State and did not make the NCAA tournament.