Kaler preps for the Capitol, Vikings

The president also discussed Jerry Kill’s contract and development around the U. 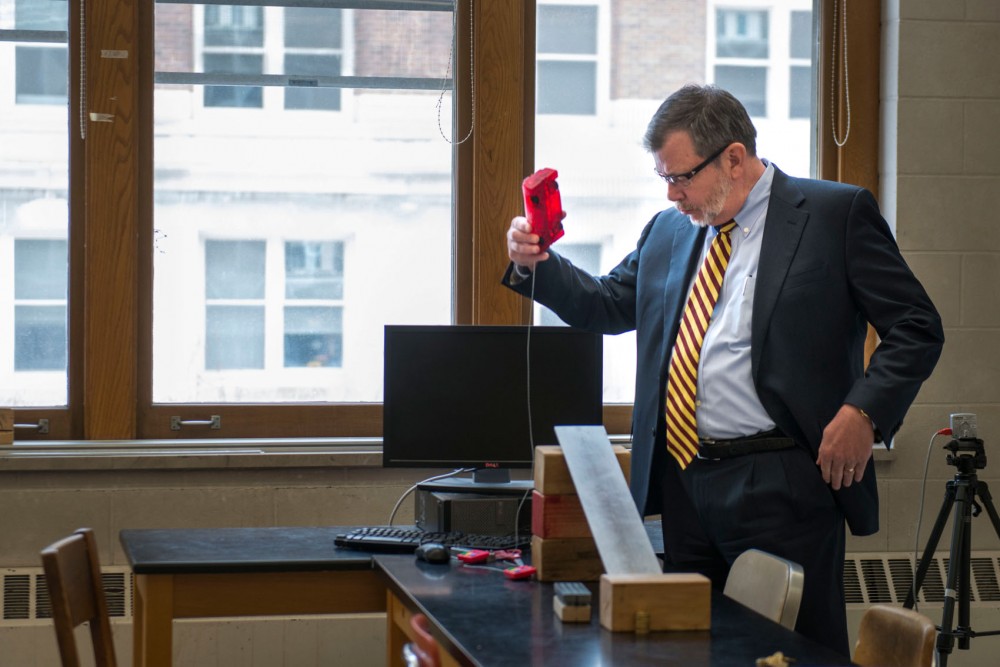 University of Minnesota President Eric Kaler tests out a physics experiment during a media tour of the Tate Laboratory of Physics on Friday morning.

The Minnesota Daily sat down with University of Minnesota President Eric Kaler on Friday morning for its monthly Kickin’ it with Kaler interview.

The College of Biological Sciences and the College of Food, Agricultural and Natural Resource Sciences will not merge because many stakeholders opposed the combination. How will the University benefit from this decision?

I think we benefit in a lot of ways. One is, I think, we benefit by just having a process of really high integrity where we did what we said we’d do. We listened, evaluated carefully, listened to opinions from a variety of sources — students, faculty, staff, the agri-business community and other stakeholders — and at the end of the day, the view was that a merger was not in the best interest of all of those stakeholders.

And so even though I think there were pretty compelling reasons to merge, we’re not going to do that. We’re instead going to look at opportunities for greater enhancement of programs and projects while enhancing and celebrating the distinctions that caused us to keep the colleges separate.

What are the negative implications?

The positive ones [to merging the colleges] I think were lowering barriers that exist between graduate programs working in related fields in the different colleges, and again, I think the faculty viewed those barriers as surmountable without a merger.

There would have likely been some financial advantages in terms of administrative costs, but again, we work to minimize those within the college structure.

The University makes its first case at the Capitol on Monday for the nearly $300 million 2014 capital request. While discussing the budget proposal with legislators, what is your first priority?

Our first priority is HEAPR, Higher Education Asset Preservation and Renovation fund. It’s just simple: HEAPR is cheaper. It is far more cost-effective to get into buildings before they’re in desperate shape — repair roofs, tuck point the brick walls, put in modern windows and doors [and] modern infrastructure.

Many of our buildings have great bones, and they’re well-served by being maintained, and that’s what we would use the HEAPR dollars for, and that’s the largest single element of course on our request list.

Last month, you mentioned working with the city of Minneapolis to form a new plan about development in University neighborhoods. What’s the status of this collaboration?

We’re still in conversations about how to best move that agenda forward. It’s complicated. It requires some careful consideration about how much we should be involved — how intrusive we should be, if you will — and at the same time, we want to be a good neighbor, too.

And so we want to respond to what the neighborhoods would like to see and make sure we’re making investments of time and resources in an appropriate way.

In your opinion, how much should the University be involved?

I think we need to recognize that we’re obviously a very big actor in this community and our students are the residential lifeblood of the surrounding communities. And so we should have an opinion about what those communities look like, and we should enable, as appropriate, the communities to develop in a way that’s helpful to the University.

I mean that by having a sustainable and robust mix of commercial activities around campus so the students can shop and live easily. I mean having a built infrastructure that’s safe, that’s well-lit and open, so that students are comfortable there, and with amenities for people who aren’t college-aged students but who want to live close to a vibrant campus and want to take advantage of the cultural and educational and athletic performance venues that we have.

So, there’s a lot of elements that go into what makes a college community, and I think we’d like to line those up and then move our community towards the models of the best.

What was the reasoning behind the University’s decision to extend coach Jerry Kill’s contract and increase his pay?

I think Jerry Kill’s a very good coach. I think he’s moved our program forward pretty dramatically, both on and off the field. Our win-loss record speaks for itself, but we have 35 Gopher football athletes who are Big Ten academic students. That’s a large number. I think it’s the largest of any public university in the Big Ten. I’m very proud of that. So when you look at a coach and his group of assistant coaches who’ve moved our program forward and then you look at that coach who is the lowest paid in the Big Ten, it seems to me that we need to make a statement about how much we value what he does and how he does it.

So we’ve moved him up to the midrange in the Big Ten. $2.1 million next year will still be below average in the Big Ten, but I think it sends an important message to our fans that we’re committed to Jerry Kill for the long-term.

How long have you been considering the contract and increase in pay?

We probably started noodling about this towards the end of last season.

Why were clauses in the contract added to allow an automatic termination and a potential post-coaching employment option?

I think both of those recognize that Jerry has some special conditions around his health, that we wanted to be able to be responsible — on the part of both the University and Jerry — in a situation that he’s unable to coach. Obviously, we’re not planning for that to happen.

The Minnesota Student Association has proposed a revision to teacher evaluations to increase transparency. How does the University feel about this proposed change?

I haven’t had a chance to review the proposed changes myself, but it’s really hard to not be a fan of a transparent and open process. I’ve said to some faculty groups here that I think we should be more open in sharing with the evaluations.

There is an issue of sort of personnel privacy and maybe some legal constraints on what could be put out there, but I think knowing about the course and knowing about the instructor helps the student make a wiser choice of whether or not that course is going to be a good fit for him or her.

What issues will you discuss in the State of the University address this week?

I am still making the final puts and takes in that, but I can tell you I’ll clearly talk about the accomplishments of the past year for a little bit, which I think have been pretty substantial … [like the] tuition freeze for Minnesota resident undergraduates for the biennium, which I think is the first time that’s ever happened, [and the] great partnership with the state for MnDRIVE initiatives.

I’ll certainly spend some time talking about the strategic planning process and where we are in that. … I’ll talk a little bit about the interaction with the city, probably. I’ll talk about our great students and some of the great faculty achievements we’ve had.

At last month’s meeting, the Board of Regents approved upgrades to TCF Bank Stadium to accommodate the Vikings’ arrival in the fall. How will students be impacted by the change?

I think the long-term benefits will obviously be helpful to Gopher attendees, students and others. The enhancements in the concourse, particularly in the colder winter months … will be felt and appreciated. I don’t think the field upgrades will be particularly noticeable to students, but some of the concession upgrades may make it a better fan experience when they come to watch Gopher games.

Those are permanent changes, so the heated field and the concession upgrades are staying after they go. The Vikings will put up some temporary seating in the west end zone, and that will go when they go.

How are you staying warm during this cold winter?