Kimberly Yeong Sil Hull was struck by a semitruck and died Thursday morning at a busy Dinkytown intersection. 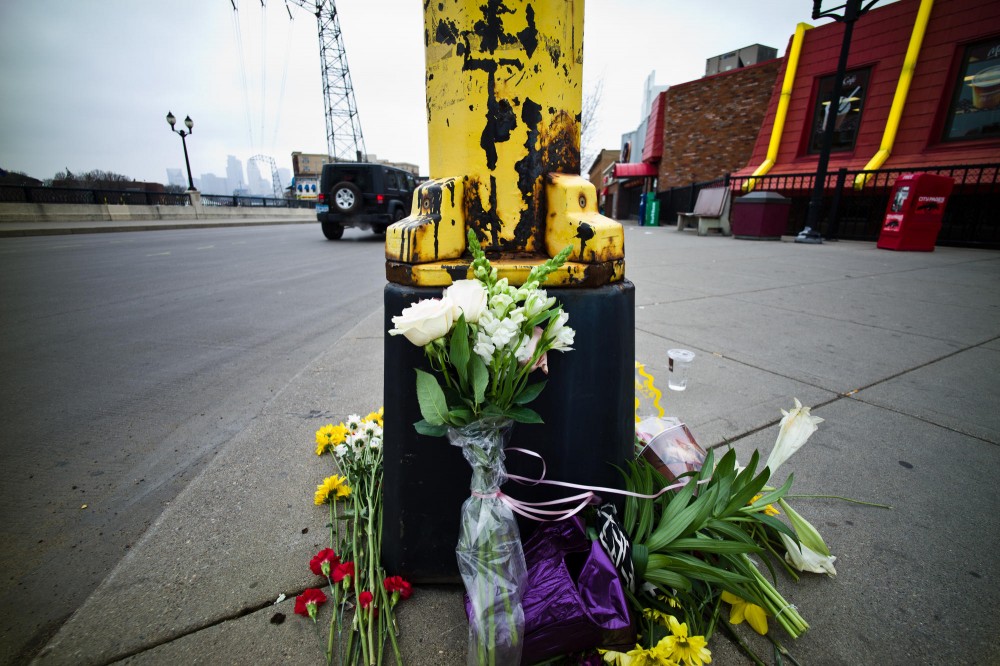 Flowers placed by mourners at the corner of Fourth Street and 15th Avenue Southeast.

A semitruck hit and killed a University of Minnesota student at the intersection of Fourth Street and 15th Avenue Southeast just in front of the Dinkytown McDonaldâÄôs Thursday morning.

Kimberly Yeong Sil Hull, 25, was biking south toward campus on 15th Avenue when the truck, also traveling south, took a right onto Fourth Street, hitting her, Minneapolis police Sgt. Steve McCarty said. The truck driver cooperated with police and has not been arrested, and police are still trying to determine who had the right of way.

Shortly before 8 a.m., emergency medical workers gave CPR to Hull as others held up a sheet to shield them from passersby.

Hull, who went by Audrey, was an undergraduate student at the University and would have graduated in two weeks. She worked in the Rarig Center, where grief counselors were brought Thursday afternoon.

Delaney Coyle, a junior in advertising, was getting a ride to campus around 8 a.m. when she drove past the scene. The victim was “lying there and people were trying to help her,” she said. “She looked like a student on her way to class.”

Minneapolis police said Hull was dead on arrival and cops were rerouting traffic around the intersection and interviewing witnesses after the accident. Her body laid in the street, covered by a sheet, for more than an hour after the accident.

Shortly after 10 a.m., emergency workers rinsed the street with a firehose and police reopened the previously shutdown area on Fourth Street from 14th Avenue to 17th Avenue, and 15th Avenue from University Avenue to Fifth Street.

Traffic accident investigators are doing preliminary work to determine the speed of the semi-truck, McCarty said.

Nels Shafer, a University student and friend of Hull’s, described Hull as an avid filmmaker who “had a lot of spunk.”

Hull constantly wore a red leather jacket with studs on the back, which Shafer said exemplified her personality.

Laura Cervin, Hull’s supervisor at College of Liberal Arts Video Services, said filmmaking was HullâÄôs âÄúhobby, her passion and part of her schoolwork.âÄù

Cervin described Hull as upbeat, witty and fun, and said she had a laugh that would âÄúring through the hallways.âÄù

âÄúI can clearly hear her, like I did yesterday, just laughing hysterically,âÄù Cervin said.

Cervin said information began filtering in shortly after the accident and was confirmed to her by other students later in the morning.