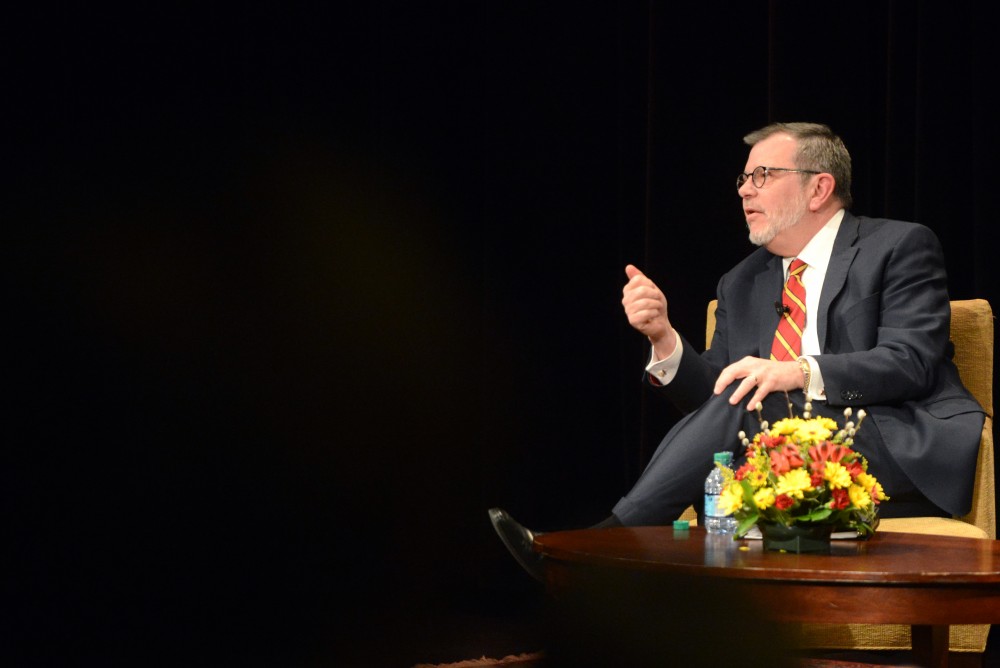 University President Eric Kaler fields questions from the audience at his State of the University address in Coffman Memorial Union on Thursday, March 2, 2017.

During Eric Kaler’s recent State of the University speech, the University of Minnesota president noted the prevalence of sexual assault on campus, which has been brought to light this school year, especially after the Gophers football boycott last fall.

One change to the culture and practices at the University regarding sexual assault — “enhanced training and additional education for students after their first year,” as Kaler put it — is a welcome move.

This was one of five points of improvement focused on sexual assault awareness and resources that the president brought up.

Each of these points — from creating better tools to collect data on campus sexual assault, to instituting mandatory sexual assault training for every University faculty and staff member — should be applauded. We think changing the paradigm of students’ sexual assault education — and specifically, to teach them of the grave reality of sexual assault on campuses, both nationwide and next door — is not just a step in the right direction, but it signals a vital shift in perspective on an issue so many members of our community face.

So much of rape culture is rooted in the authority and power some members of our community have over others, privileges that can be based in gender, race, sexuality or financial resources.

But a power structure that affects all of us on campus, no matter our identity, is the transfer of knowledge from lowerclassmen to upperclassmen at the University.

An integral part of creating a safe, welcoming campus is to remind students of the increased responsibility that comes with growing older and becoming a leader on campus. Seniors ought to be good stewards of the influence they wield.

Kaler reiterated the importance of this step during his most recent interview with the Minnesota Daily, saying, “We need to work effectively to provide continued training and opportunities for learning beyond the first year.”

We should all take this moment in the wake of recent reports of sexual assault across our campus to ask ourselves what is our personal responsibility in preventing sexual assault on campus, and how can we best provide support when misconduct does occur.

Do you remember what you were required to learn about sexual assault when you were a freshman at this school? When you’re at a party, do you know the signs of abusive behavior? If one of your friends came to you and told you that someone you know had assaulted them, and they needed help, would you know how to help them? More likely than not, some of us wouldn’t know how to answer those questions — that’s why continued training is so important.

We are glad that the University seems more intent on offering resources on sexual assault, so that having the answers to those questions — and remembering them — will be easier in the coming years. But before these new programs are initiated, consider taking it upon yourself to learn more by going to training at The Aurora Center or exploring their resources online.