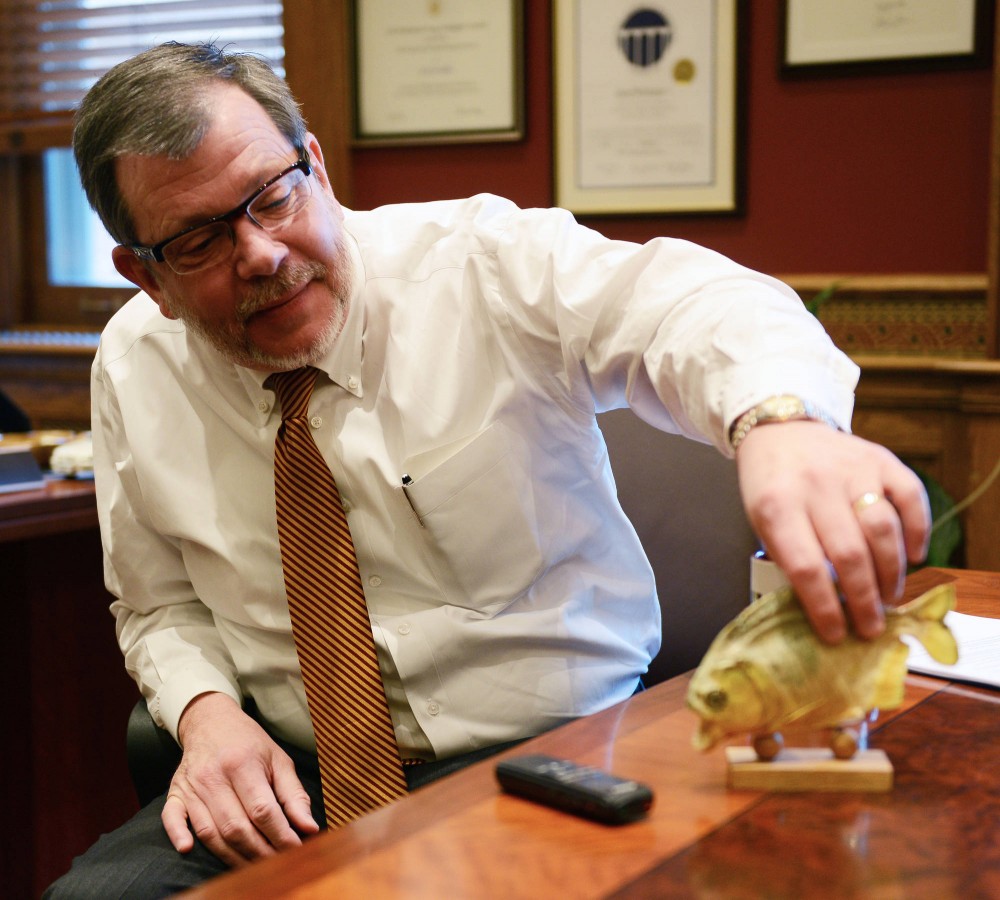 University president Eric Kaler with a piranha he got in Brazil while doing research there at his office in Morrill Hall on Friday.

The Minnesota Daily sat down with University of Minnesota President Eric Kaler for its monthly Kickin’ it with Kaler interview Friday afternoon.

Kaler discussed going on a ride-along with University police, Minneapolis’ recent elects and an inspirational piranha in his office.

What is your reaction to the recent violent crimes on and around campus?

I’m concerned about our campus’s reputation for safety. However, crime is down compared to previous years, and there is a predictable uptick in crime in the first part of the fall semester as students come back, but the current situation is unacceptable …

We’ve had a meeting with the Minneapolis chief of police. I met with the incoming mayor earlier this week, and we’ve conveyed our desire to have additional Minneapolis resources to help us.

Our [University police do] a great job of responding to crime in the neighborhoods. We feel, obviously, a responsibility for the safety of our students, but we do hope to get some additional help from Minneapolis for their precincts.

I went on a ride with the police Friday night into Saturday morning and saw a lot of dedicated individuals working hard to help keep our students safe, and I do reiterate that a police presence is not the only thing that we need to ensure safety. I do continue to encourage our students to watch out for each other, to walk in groups.

When the bars [close] on Saturday morning, we have some inebriated young people that are very easy targets for theft, so making smart decisions on an individual basis can also help keep people safe.

We saw a lot of things. Initially, in the first part, we started at about 10 o’clock in the evening [and saw] a variety of traffic activities, a guy going the wrong way down University Avenue, people making some poor vehicular decisions … Then as the night went on, the activity picked up pretty remarkably. … At about 3 a.m., the police team made a significant arrest in a parking lot of Dinkytown — an individual with a felony warrant and some apparently stolen merchandise in his car.

So our officers are working hard, they are making arrests, they are out there. We’ve spent about 100 hours of overtime pay so far in the past week to 10 days, and we will continue to make that investment to ensure that we have officers on the street.

Can you tell me a little bit more about your meeting with mayor-elect Betsy Hodges?

We had a good meeting. We talked about lots of things, centering on the intersection of the city and the University — our ability to have our academic programs, and the practical outcome of those [programs] translate into good outcomes for the city, whether that’s in urban design or in social work or in K-12 education — a variety of activities where the University expertise can help the city be better.

Do you think the University’s relationship with the city will change with a new mayor?

The mayor is new, and [there are] seven new council members, including the first Latina woman, the first Hmong and the first Somali, so they’re really reflecting the diversity that is Minneapolis.

Dr. Brooks Jackson was recently named University of Minnesota Medical School dean and vice president for health sciences. How will this change in leadership affect the Academic Health Center?

I’m incredibly excited about Dr. Jackson. He is [an] absolutely world-class researcher; he’s a terrific leader. … He’s a principal investigator on the largest [National Institutes of Health] grant in the country, very effective at raising philanthropy, so he’s the total package, and I think the medical school will be energized by his arrival.

I think he’s going to be a terrific leader and is going to be a magnet for talent, motivating people who are already here to do more and attracting people from other institutions to come to the U, so I couldn’t be more excited about him.

The search for a new College of Liberal Arts dean is under way. What is the biggest challenge the college faces, and how should new leadership address it?

But the new dean will need to galvanize faculty to talk proactively about the value of the liberal arts and to engage in deeper and more penetrating scholarship that illustrates the value that [CLA] has for us.

Last spring, an external review found that the University’s honors program could potentially benefit from increased funding and additional courses. Do you think this will happen soon?

Two things: One is we have a lot of programs that could benefit from increased funding. Two, our honors program is really a pride point for the University, and it will compete for funding during our normal budget processes as we go into the spring for [the] next fiscal year.

Clearly, we’d like to be able to invest more money in things, like our honors program, and the way we’re going to be able to do that is through our operational excellence activities. … The whole point of that exercise is to free up dollars that we can put into high-priority academic programs.

What’s the most unique item in your office, and what’s the story behind it?

I have a lot of knick-knacks. I’m a little bit of a knick-knacky guy.

(Goes to find an item on his bookshelf)

That is a piranha. … I got that in Brazil when I was doing research. Funding for research is awarded by the federal government after [a] very rigorous peer-review process, so it’s a highly competitive environment for funding.

So when I was writing research proposals, I would always look at the piranha to remind me of the competition that that proposal was going to face.

The Minnesota Daily interviewed students to hear what they would ask the president. Here’s what they wanted to know:

What’s your overall take on how CLA research is funded compared to other University colleges, like the College of Science and Engineering, for example?

College funding is sorted out in an overall budget process for the University within the framework that we have, but the role of research in the role of liberal arts is incredibly important.

We need to know how people interact with each other, how they reason, how they come to know things and their different ways of knowing.

We need to understand our history, and we need to maintain and strengthen the culture that makes our civilization a great civilization.

So all of those and more are at the heart of research and creative mission in the College of Liberal Arts, and it’s absolutely necessary for our society.

How will the possible merger of the College of Biological Sciences and College of Food, Agricultural and Natural Resource Sciences affect students and the schools?

We’re having a discussion with a large number of stakeholders around the potential for that merger. … We obviously want the outcome of any action to be positive, so we’re not going to merge two colleges if the outcome is not as good as keeping them separate — and that outcome is reflected in the ability of faculty to carry out their research programs and on the ability of the faculty to deliver the undergraduate programs that we want.

Both CBS and CFANS have important, distinct and different cultures and experiences, and we want to be respectful of that. So any combined college would need to have an undergraduate program that’s as good, or better, [than] the two that exist now.