Get your fix of the seasonal stage. 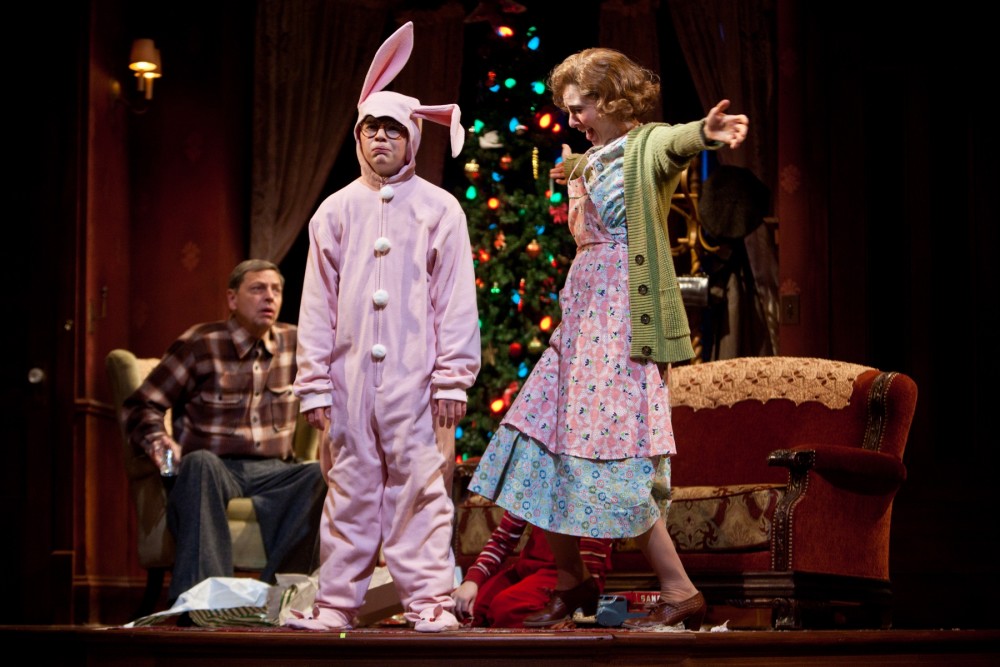 What: A Christmas Story

The film version of âÄúA Christmas StoryâÄù has been worn out for many people âÄî an excess in exposure that could easily be attributed to TBSâÄô annual Christmas day-long repetition of the film. So even if mustering up an interest in a tale so often told sounds like a waste of attention, the stage production at MinneapolisâÄô ChildrenâÄôs Theatre Company may rekindle a bit of forgotten love towards this holiday staple.

And thatâÄôs what this performance and Jean ShepherdâÄôs original written source material, âÄúIn God We Trust, All Others Pay Cash,âÄú has always been about âÄî the monument of past tradition.

Perhaps thatâÄôs what has always been so exciting about this weaving of adult perspective and childhood whimsy that has lead to the work becoming such a constantly returned-to staple.

âÄúThese events of childhood are epic,âÄù Brosius said, âÄúand Shepherd is brilliant about understanding the life or death, the hugeness of the consequences that children experience.âÄù

This season can often be about recapturing that childhood fervor, and itâÄôs exactly what Brosius and company are offering in their production.

The holidays can kind of suck. The inevitable coagulation of family and friends all attempting to ensure that perfect season has a tendency to stir up more anxiety and bitterness towards one another than any semblance of goodwill toward men.

So in collaboration with Bill Corbett of Mystery Science Theatre 3000 fame, Joking Envelope Theatre Company will reconcile that holiday angst with their âÄúSuper-Powered Revenge Christmas #1,âÄù and they will do it with superheroes. The production, which Corbett wrote, follows a down-and-out comic book writer who has decided itâÄôs time to reinvent Christmas âÄî comic style.

âÄúA lot of it is hinging on those ideas of what perspective to have on the holidays,âÄù Joking Envelope founder Joseph Scrimshaw said, âÄúWhether to embrace it as a sort of saccharine-sweet event or whether to be sort of ironic and nasty about it.âÄù

And a troop of Christmas icons will be popping up in this performance. Be it Santa ClausâÄô brooding Red Avenger character or George BaileyâÄôs untraditional strongman demeanor, Joking Envelope is fixing that Christmas that may be stale by giving it the old reboot.

What: A Christmas Carol: The Golden Girls Remix

When: Now Through December 15th

Save the wonderfully dim humor of Betty White, the world has now been robbed of its other three Golden Girls. And as the sharp, catty conversations that riddle the episodes drift deeper into the pop-culture bedrock, people often fail to realize that âÄúThe Golden GirlsâÄù is not one of those older sitcoms that need to be approached with a tinge of sarcasm. This is something that Theatre Arlo is not forgetting in their âÄúA Christmas Carol: The Golden Girls RemixâÄù production.

âÄúItâÄôs a really sharply written show,âÄù actor and Theatre Arlo co-founder Bill Stiteler said. âÄúItâÄôs not something that needs to be watched ironically for its time.âÄù

ItâÄôs all about conversation, and these girls have always been able to talk. Be it the perpetual jokes over BlancheâÄôs promiscuity or RoseâÄôs dumb, small-town disposition, watching these four seniors burn each other back and forth not only has been the crux of the show, itâÄôs also placated a significant stage sensibility within the source.

âÄúThe show itself is almost a play,âÄù Stiteler said. âÄúThey typically have one set and itâÄôs the four characters moving back and forth from the living room to the kitchen.âÄù

While the script takes a pretty basic approach to âÄúA Christmas CarolâÄù as the narrative rubric, that sharp wit of the original series is the reason for any fan to attend. And even if the naysayers just give a bit of time to the hours of re-runs Lifetime plays, they may be surprised to find themselves wooed into attendance as well.