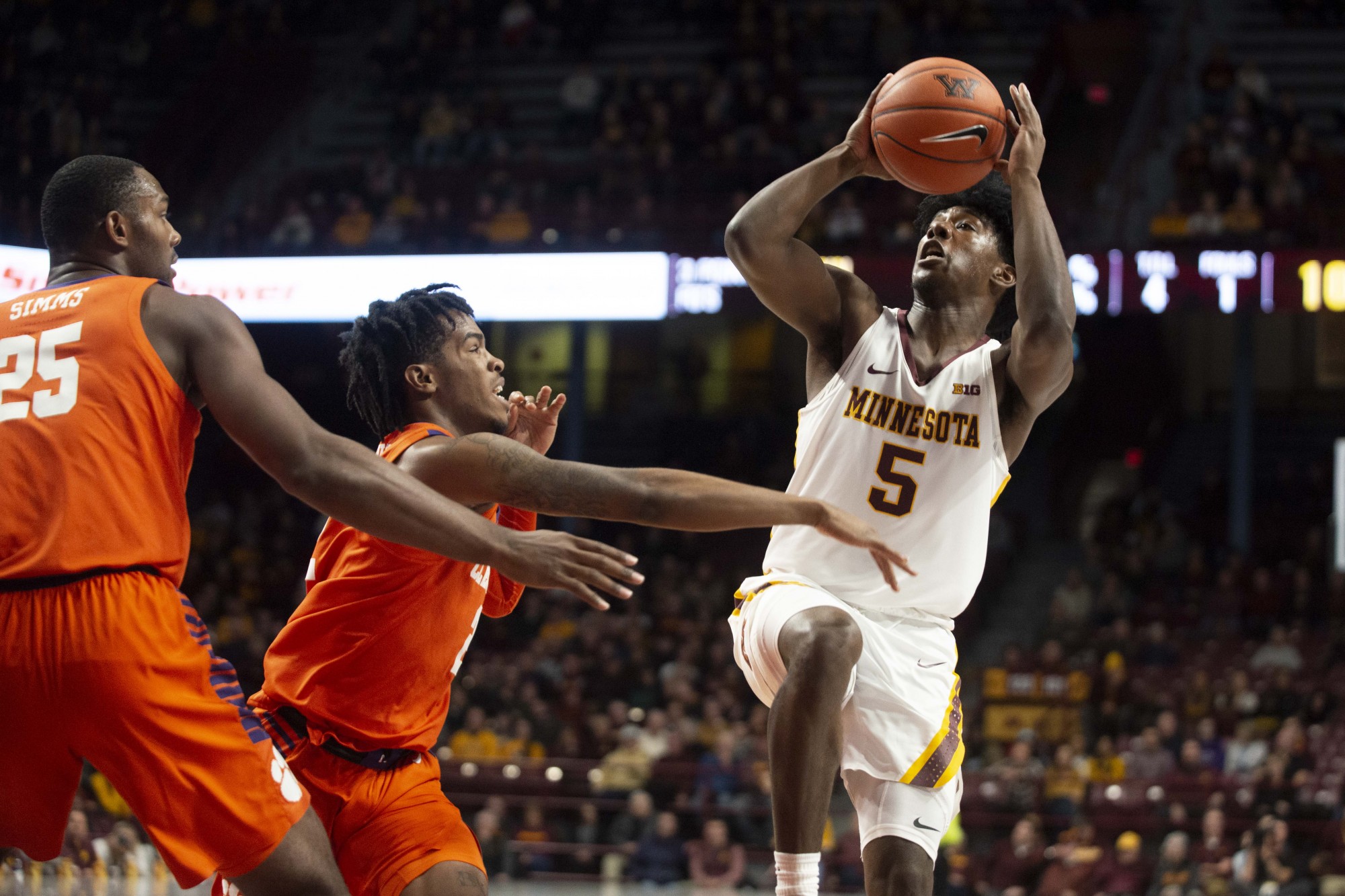 Coming off of a 73-68 defeat against DePaul, the Gophers had one more opportunity to defeat a major conference opponent before the start of Big Ten play when they hosted Clemson on Monday.

Shooting 53.8% from the field, Minnesota managed to pick up a 78-60 victory in the Big Ten-ACC challenge against Clemson.

According to head coach Richard Pitino, the win was his team’s best overall performance of the season.

“That’s a good Clemson team,” Pitino said. “I thought we played as complete a game as we played in a while. It was a terrific performance.”

In the game’s opening stretch, Minnesota (4-4) used a pair of dunks from sophomores Daniel Oturu and Jarvis Omersa and an 8-0 run to build a 15-4 lead. Clemson (5-3) quickly cut the Gophers’ advantage to single digits, where it stayed for the rest of the half. However, the Tigers could never pull within one basket before intermission.

“I thought from start to finish we played terrific,” Pitino said. “Weathered a lot of foul trouble in the first half, which was very, very challenging.”

Foul trouble hindered the Minnesota front court as Oturu picked up three personal fouls in the first half and Omersa was whistled for two. By halftime, freshman forward Sam Freeman had already tied a career-high with four minutes played.

A strong offensive output by redshirt sophomore Marcus Carr kept the Gophers in front during the first period. Carr scored 11 points and dished out five assists in the opening half.

“He was playing with a much better pace,” Pitino said. “He was changing pace better, getting into the lane, getting physical at the rim.”

To begin the second period, Carr and Oturu scored on layups in the opening minute, starting an 8-2 run that gave Minnesota its largest lead of the night at 45-30 when Clemson called a time out with 16:38 remaining. The Gophers’ surge did not stop there as they went on to score 20 of the half’s first 30 points, opening up an 18-point lead.

The rest of the game, Minnesota managed to keep Clemson at arm’s length, despite foul trouble. The Tigers were forced into tough shots in the second half especially from behind the arc, where they shot 2-11 on the evening. Four Clemson players scored in the double digits, but none managed more than 12 points. As a result, the Gophers’ lead grew to as much as 22 points as they cruised to victory.

Carr’s performance stood out, as he led all scorers with a career-high 24 points. He finished one assist shy of a double-double and contributed five defensive rebounds.

Sophomore Gabe Kalscheur added scoring from the outside, making 3 out of 5 3-pointers and scoring 15 points on the evening. Oturu asserted himself in the paint, making 9-11 field goals to finish with 21 points, playing physical despite foul trouble.

“I just try to make simple moves, let the game come to me,” Oturu said. “I’m not really trying to do too much, especially when I have fouls.”

Minnesota has one week off before a short bus ride south to open Big Ten play against Iowa next week. The Gophers are hoping to use this victory as a momentum-starter heading into conference play.

“It’s a good boost for us,” Oturu said. “We just beat a high-major team and we have Iowa next Monday, so it should give our team some confidence going into a Big Ten game this early in the season.”