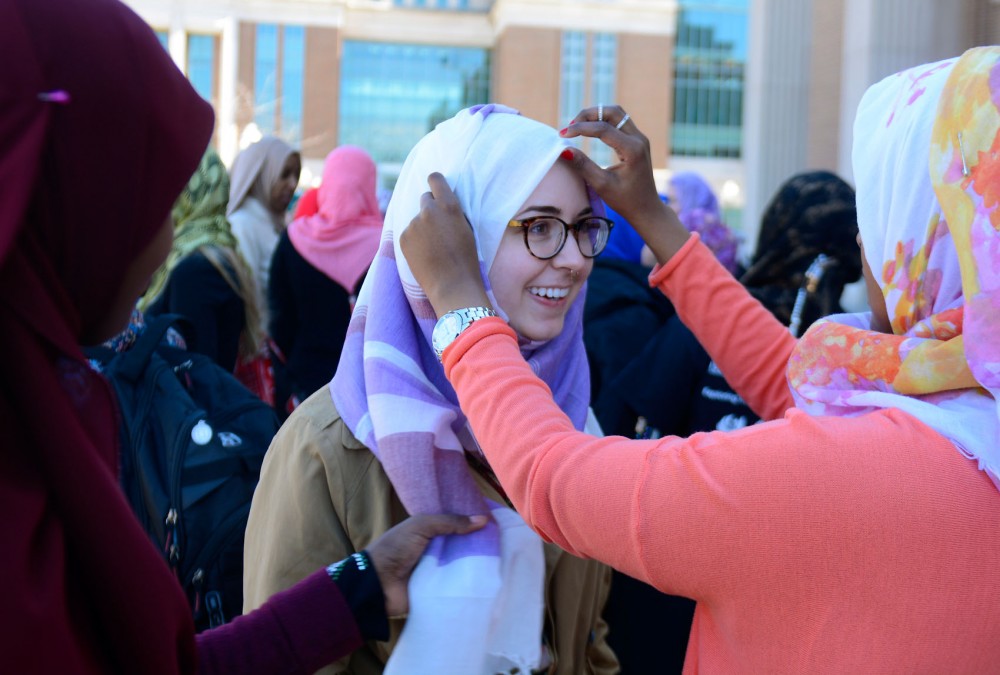 Junior Anastasia Press (center) smiles as Freshman Megan Abdirahman (right) helps her put on a hijab for "Hijab for a Day", an event put on by the U of M Al-Madinah Cultural Center for Islam Awareness Week. The event was designed to demonstrate the importance of wearing the Hijab for Muslim women.

Parker Lemke
More than 350 University of Minnesota students covered their heads with hijabs in front of Coffman Union on Tuesday while Muslim students taught them about the importance of the headscarves in Islam.
The event was one of several the Al-Madinah Cultural Center and the Muslim Students Association hosted to both celebrate Islam Awareness Week and help clear up common misconceptions about Muslims. Student groups hope this week will explain aspects of their culture and set the groundwork for a better community for Muslims on campus.
The many misunderstandings about the daily life of practicing Muslims can make situations uncomfortable for those who follow the faith and non-Muslims alike, AMCC President Nora Nashawaty said.
One recurring issue, she said, is movies and TV shows linking the words “Allahu Akbar” — an Arabic term meaning “God is great” — with terrorist characters.
“We say that when we pray, and it’s tough to know that if I’m going to say it out loud, someone might think that I’m about to do something horrible,” Nashawaty said.
Lack of knowledge about Islam along with negative  portrayals of Muslims in the media can result in misunderstandings, said English and family social science junior Inari Mohammed, a member of the Islam Awareness Week committee.
But events like Tuesday’s hijab handout help open communication paths with non-Muslims through personal interactions, she said, adding that many people came forward to learn more about the headscarves.
“They told us they don’t know why we wear hijab[s],” Mohammed said, “and so it’s a really good opportunity to answer the questions they do have.”
Because of the noticeable Muslim population on campus, it’s important not to be ignorant of the way they see the world, said linguistics senior Ben Slye, who attended a discussion about the meaning of modesty.
Slye asked at the meeting whether it was OK to compliment a Muslim woman on her hijab, which other attendees said would conflict with the headscarf’s purpose to maintain modesty.
“I don’t know the interactions that I’m supposed to be having [with Muslims], and I want to cultivate those relationships,” he said.
Family social science senior Samsam Mohamed wears her hijab both to abide by the Quran and as a personal choice.
“It’s security for me. I feel I’m secure. I’m safe,” she said. “For me, I have that inner peace of person. I really feel complete; I feel calm when I wear the [hijab].”
But in a literature class last year where she was the only Muslim, some of her classmates gave her looks as if questioning why she was there, Mohamed said.
Being more open-minded and willing to ask a person why they wear a hijab can help avoid these situations, she said.
Sometimes uncomfortable situations can arise from common routines of the faith, such as purifying oneself through ablutions before praying, Nashawaty said.
“You have to wash your feet, and it’s so awkward to be washing your foot in the sink and someone walks in,” she said.
Another part of the week involves eight students living as a Muslim for five days, said Daphne Yuan, Multifaith Student Council vice president and one of the participants.
Those who take part are asked to pray five times a day, wear a hijab, fast and avoid alcohol, pork and sexual activity, she said.
“It’s a very big commitment and dedication to religion,” said Yuan, who identifies as a Deist.
A desire to better explain everyday events in a Muslim’s life partly led to a new event this year — a play written by students that will be performed on Friday, Nashawaty said.
The plot follows a student who was born a Muslim and only recently began discovering what it means to follow his faith.
“You have struggles like, ‘What do you do when someone flirts with me? What do I do when someone asks me to drink alcohol?’” she said.
Beyond Islam Awareness Week, Nashawaty hopes to continue bringing people of different cultures and religions together with the Al-Madinah Cultural Center’s “Real Talk” discussions, which the group started in response to the February shooting of three Islamic University of North Carolina students.
“We just really wanted to elucidate those struggles and also the really cool things our religion empowers us to do on a college campus,” Nashawaty said.
Delete Image
Align Left
Align Center
Align Right
Align Left
Align Center
Delete Heading