Minnesota enters the National Duals fresh off a win over No. 1 Penn State. 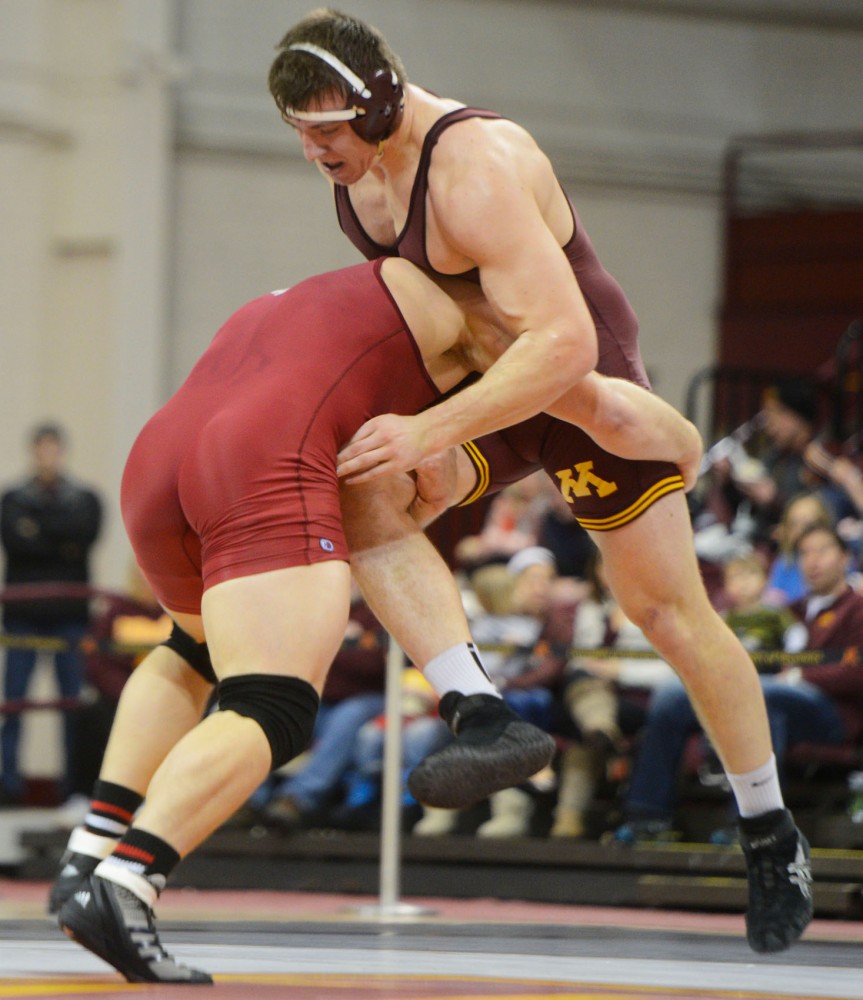 Minnesota senior Tony Nelson wrestles his opponent during the meet against Indiana at the Sports Pavilion on Sunday, Feb. 2, 2014.

If beating the No. 1 team in the nation wasn’t enough to show its merit, No. 2 Minnesota will be afforded an opportunity to bolster its resume this weekend.

The team will face a slew of the nation’s top teams at the NWCA National Duals in Columbus, Ohio.

The Gophers have claimed the last two National Duals titles and are the favorite to win again. A three-peat, however, won’t come without its fair share of difficulty, as the field features 10 teams in the top 25.

Minnesota head assistant coach Brandon Eggum said he is aware of how tough it will be to win it again.

“There are a lot of tough teams going this weekend,” he said. “Cornell could be a tough challenge in the championship dual.”

No. 4 Cornell holds the No. 2 seed and is the favorite to battle the Gophers in the championship dual — assuming both teams do what it takes to get there.

While the level of competition will be tough, there are a few notable teams missing from the National Duals, including No. 1 Penn State, No. 3 Iowa and No. 8 Oklahoma State.

Eggum said he isn’t worried that their absence will dilute the title if Minnesota wins.

“It’s a little disappointing they won’t be there,” he said, “but we’ve already beat them all head-to-head this year, anyways.

“I don’t think there will be anybody out there saying, ‘Penn State wasn’t there, so it doesn’t count.’”

That’s not to say the team feels like it has nothing left to prove, though.

Gophers junior 174-pounder Logan Storley emphasized that this tournament offers an opportunity for the Gophers to prove themselves again.

“We proved ourselves last week [against No. 1 Penn State],” he said, “but after that loss to Michigan, we still have something to show.”

Gophers senior heavyweight Tony Nelson said this tournament is exciting because it focuses on team duals rather than isolated individual performances.

“It really helps support the team aspect of wrestling,” he said. “And to win it again and be a part of three National Duals championship-winning teams — that would be pretty special.”

Storley said while the team is excited for the National Duals, its focus is still on the Big Ten and NCAA tournaments.

“This week gives us an opportunity to really start wrestling well here at the end of the year,” he said. “Then we can make that push toward a national championship.”

Nelson echoed those sentiments and said this tournament could get the ball rolling.

“The NCAA tournament and the Big Tens — those are the big tournaments,” he said. “If we can beat them there, that’s where it really counts.”