An evening with Allen Christian, the North Loop’s biggest baller 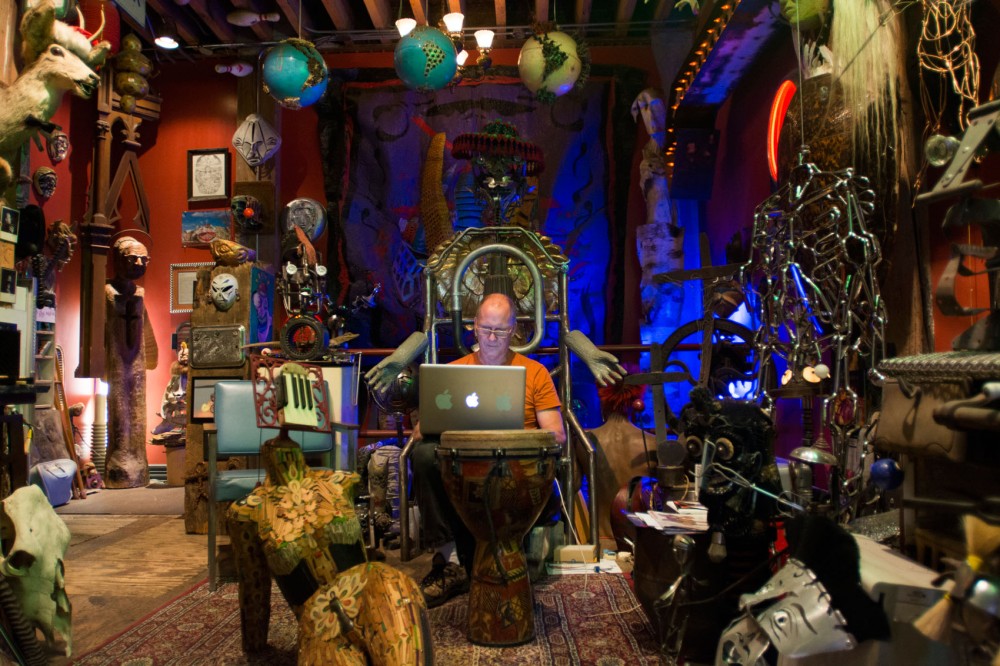 Artwork covers the walls as artist Allen Christian works on his computer on Tuesday at House of Balls in Minneapolis.

When Allen Christian arrived at his House of Balls at 6:45 last Wednesday night, he proceeded to methodically turn on every up and downstairs light as he murmured about his four-year stint in the military.

“Shot a gun twice. Spent most of my time overseas,” he said.

Finally, the gallery was completely illuminated.

“Welcome to my House of Balls,” Christian said, scanning the space.

The House of Balls, initially inspired by Christian’s love for plasma-cut bowling balls, has incited fear and fascination in the North Loop for 19 years. The floor-to-ceiling creations are for sale, but there are no price tags and Christian doesn’t have set hours. He’s the poster boy for the enigmatic artist type.

Soon after he welcomed me in, Christian gestured toward the basement.

“Take a look downstairs. I’ll be right back,” he said.

The staircase wobbled as I made my descent — the steps appeared to be constructed from corkboard. As I grabbed the railing for support, I realized it was held in place by nothing more than two unstable bowling balls.

A cardboard box of assorted canned beers rested on a chair near the front of the staircase. Two more cardboard boxes sat a few feet away, both containing an array of animal bones and teeth. On the back wall, a massive set of eyeballs peered out from underneath a car hood doubling as a welder’s mask.

Christian goes to great lengths to bring found objects to life. New faces and bodies materialized before me with each glance and, combined with the bizarre instrumental music drifting from a nearby speaker, they gave me an uneasy feeling. Was I being watched?

It soon became apparent that Christian wasn’t going to retrieve me from the basement. I walked up the stairs to find him perusing Facebook, his MacBook propped on a hand drum.

Christian set the computer aside and motioned for me to join him. Our chairs were so close he was able to rest his elbow on my armrest. He began talking about the changing North Loop landscape, leaning in and maintaining unwavering eye contact. I felt my heart beat in my head.

“We’re going to glean something from you that’s never been gleaned from the House of Balls,” Christian said.

The man’s eyes popped. He cleared his throat.

Satisfied with the man’s response, Christian resumed his monologue. But when a montage of photos from Burning Man came up on his MacBook screen saver, he changed the topic again.

“That’s what Burning Man is like,” he said, pointing to a photo of a man mooning the camera.

Christian said the ethics of his studio have always been like Burning Man’s in that both emphasize giving without expectation.

“I’m an electrician,” Christian said. “I don’t think of [House of Balls] as a business — I think of it as a life.”

Three of Christian’s mannequins, covered in pieces of deconstructed pianos, are currently featured in an 11-month exhibit at the American Visionary Art Museum in Baltimore.

The exhibit revolves around the idea that humans are becoming more machine-like and vice versa, which Christian said summarizes the direction his work has taken over the last few years.

“I’m just worried about us,” he said. “We’re not confronting our demons, because the demons are us.”

Christian said he thinks the human race is approaching a massive kill-off — something akin to a black plague — but that isn’t reflected in his art.

“I think my art is actually becoming more beautiful,” he said. “Having done this for 30 or so years, I don’t think I’m as full of angst as I used to be.”

Christian continued, but was interrupted mid-sentence by the disoriented man’s return.

The man introduced himself as a carpenter on tour with the Broadway production of “Wicked.” He was taking a few days off to recover from a sinus surgery he’d had earlier in the week to remove polyps.

When Christian urged him to explore the basement, I took the opportunity to ask about the boxes of bones. Christian said he plans to combine them with medical supplies for a future project.

“I love juxtapositions of things that are totally unexpected,” he said. “A lot of the materials I’m drawn to are things that people find unnerving already.”

Though House of Balls is reminiscent of the Beetlejuice  underworld, Christian said his creations aren’t meant to shock people.

“They’re just experiments with material and trying to imbue an inanimate object with life,” he said. “It’s my connection to myself, to what I see when I look in the mirror, when I look outside, when I try and connect with humanity.”