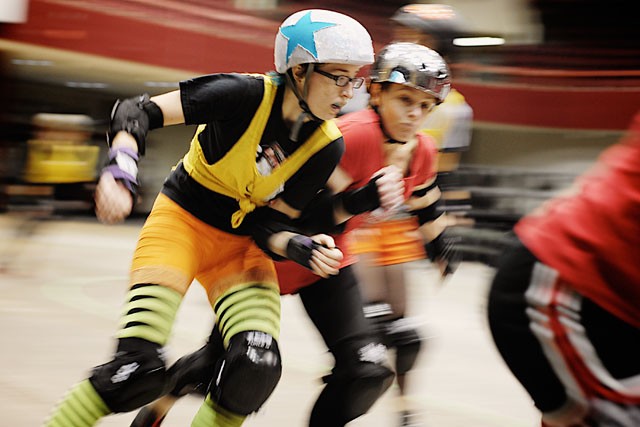 WouldnâÄôt it be wonderful if, after a long and stressful day of school or work, you could just strap on a pair of skates and run down some folks until your frustration abated?

Welcome to the world of womenâÄôs roller derbies. Like any other competitive sport, these girls sweat their asses off and train intensely to make sure they dominate their opponents. Unlike basketball, swimming or volleyball, however, theyâÄôre trained like semi-naked hockey players to deliver the hardest, most effective hits on the derby floor.

âÄúI didnâÄôt ever think it would be that physically demanding, but it definitely is. Injuries happen all the time. You really have to take care of yourself,âÄù said Ashley Peterson (aka Cassie Rolle), a derby participant and architecture senior at the University of Minnesota.

Prepping for bouts is dangerous in and of itself, especially if âÄî like Peterson âÄî you donâÄôt actually know how to skate when you sign up. Spiral fractures, broken thumbs and quite a few bumps and bruises have occurred at practice and tryouts. âÄúBoot camp,âÄù as the players call it, is for some the most demanding part of being in the derby league.

âÄúItâÄôs kind of like a top-secret, four-hour boot camp from hell,âÄù Peterson said, âÄúA lot of skating for four hours straight and doing push-ups and other stuff in your skates. The people that leave donâÄôt really want to do it, the people that stay do.âÄù

Then thereâÄôs the fact that all home games are at Roy Wilkins Auditorium, the same arena where Neil Young, Beck and the Flaming Lips have played to thousands. If somebody makes it through tryouts, she may then have to deal with crippling stage fright.

âÄúAt first, itâÄôs a little overwhelming, because there are about 5,000 people screaming at you,âÄù RollerGirl Alanna Hebner (aka Ova Achieva) said. âÄúThere arenâÄôt many experiences in a personâÄôs life where you have that many people cheering for you.âÄù

Some of that cheering crowd is likely to be members of the menâÄôs roller derby team, the Twin Cities Terrors.

The RollerGirls have scrimmaged against the menâÄôs team and have gotten to know them well, but the slightly harder-hitting menâÄôs team has yet to achieve the same recognition as the womenâÄôs derby. The RollerGirls teammates arenâÄôt too concerned about any shadow cast in their spotlight.

âÄúI think itâÄôs great that men can do it, too, but itâÄôs nice to be part of a sport where females dominate the field,âÄù Hebner said.

Students and employees fantasize about taking out a professor or boss from time to time. The RollerGirls also fantasize about whom theyâÄôd most like to bout. ItâÄôs not anybody from their league or the menâÄôs league, and itâÄôs not Ellen Page or Raquel Welch.

âÄúSarah Palin. I would kick her ass. Though I would never want to see her in a short skirt,âÄù Peterson said.