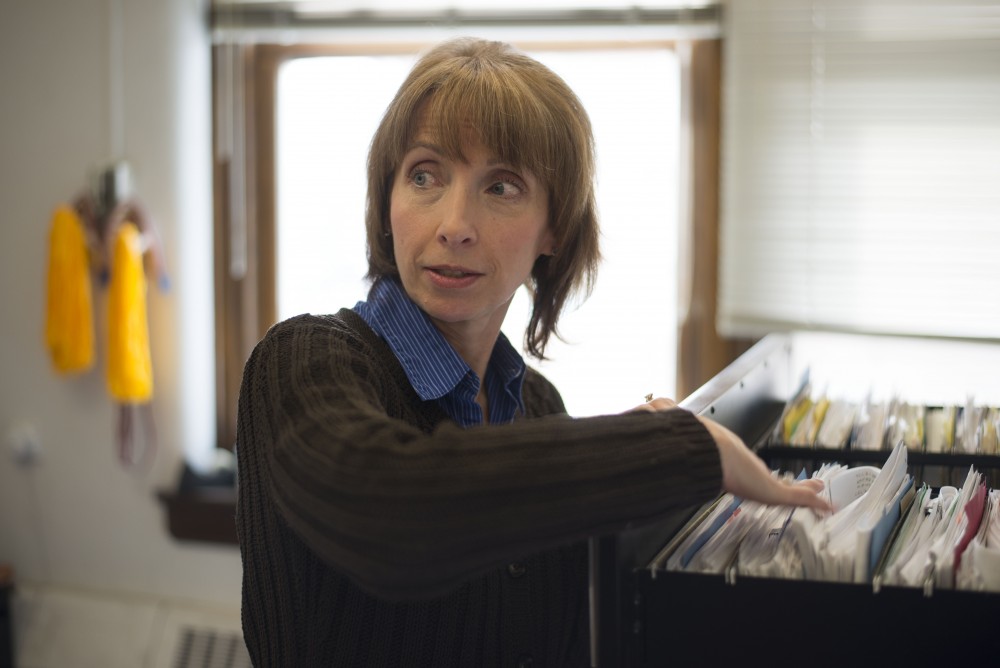 Julie Tonneson, associate vice president for budget and finance at the University, looks through years of old files in her office at Morrill Hall on Thursday, Feb. 21.

It’s a skill that comes in handy for the University of Minnesota’s budget director, who is responsible for guiding the school’s multibillion-dollar annual operating budget.

Calm and collected, Tonneson’s finesse with financial matters quickly becomes evident to those who have seen her in action. During presentations before the Board of Regents and testimonies to state lawmakers, Tonneson often whips out a multitude of facts and figures on the spot, breaking down the University’s highly complex fiscal enterprise like elementary school math.

With more than two decades of experience, Tonneson knows the ins-and-outs of the institution’s nearly $4 billion budget better than almost anyone else. Serving under four different presidents, multiple economic downturns and a changing landscape in higher education, Tonneson has become the University’s de facto budget extraordinaire — holding a unique kind of knowledge that school officials acknowledge would be difficult to replace.

“We’re very fortunate that she has the ability to navigate what could be a really tough job,” said Senior Vice President for Finance and Operations Brian Burnett, Tonneson’s boss. “There aren’t a lot of people at this University that could do her job right now. In fact, I can’t think of anyone who can do it.”

As discussions about this year’s budget begin to heat up before regents vote on it in June, Tonneson will continue to play a major role in the process. And in the 25 years she has worked on the University’s budget, Tonneson said, “We never had a budget that hasn’t been approved in the end.”

However, Tonneson readily admits she doesn’t have every number memorized.

“I’m not afraid to say that I don’t know,” she said

Tonneson’s mix of expertise and natural humility makes her special, according to current and former colleagues. They attest to Tonneson’s even-keeled approach to her work, collaborative attitude and dedication to public service as a “priceless” asset to the University.

Tonneson came to the University in 1993 after working for the state of Minnesota as a budget analyst for K-12 education. The University’s former CFO Richard Pfutzenreuter III recruited Tonneson to help engineer the University’s budget process.

The line of work requires an analytical mind and a thoughtful approach to solving financial issues, Pfutzenreuter said.

Tonneson, who holds a master’s degree in public affairs from Humphrey School of Public Affairs, has since worked her way up to oversee the budget office — helping determine how much money the University has and how it can use that money.

“It’s working with all of the units to understand their needs, their budget challenges, their goals,” Tonneson said. “Trying to align those with the president’s and the board’s goals and priorities and make all of that happen, or as much of it happen within the resource constraints we have.”

That means she’s at the center of almost every conversation happening on campus, from new research projects and academic programs, to tuition increases and administrative cuts.

As Burnett puts it, her office deals with “all of it. Every school, every college, every campus, every unit.”

Tonneson starts planning for the annual budget every summer, almost a full year before it needs to be approved by the regents in June. Every two years, she also helps the University put forward its biennial legislative request, complicating an already difficult process with uncertainty about how much lawmakers decide to allocate.

“She’s really trying to provide the honest analysis and evaluation for all the budget issues in the entire system,” he said.

However, Tonneson’s tenure has not been without challenges, including confronting the drop in state funding after the Great Recession and increased criticism about perceived administrative bloat.

But for Tonneson, the work comes back to the University’s mission to serve the state. Those who know Tonneson echoed her dedication to public service.

“She doesn’t crave the spotlight,”  Pfutzenreuter said. “She wants to be, and is, a very dedicated public servant.”