Men’s hockey to keep new line together against Wisconsin 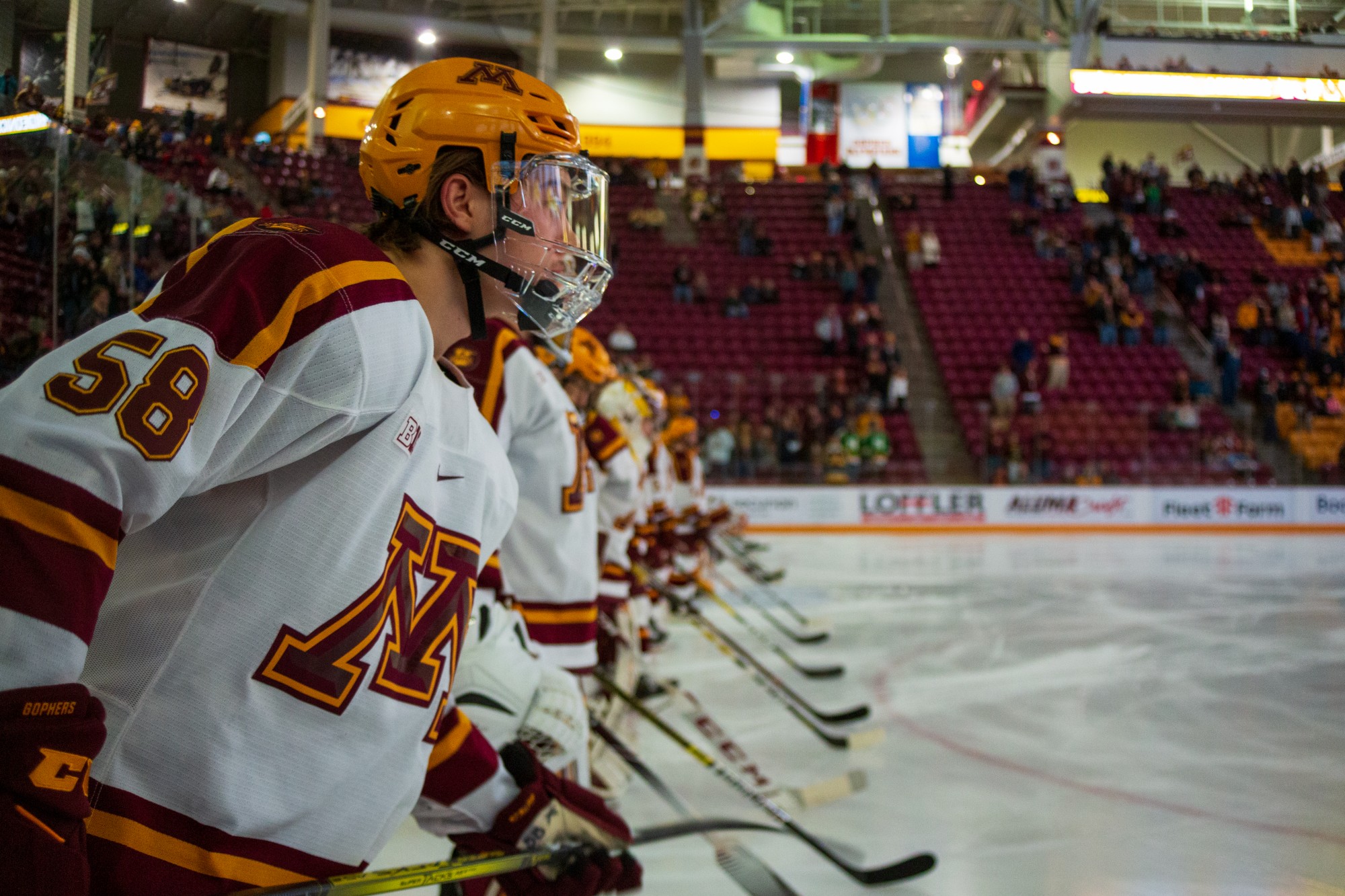 The Gophers line up in preparation for their game against Ohio State at 3M Arena at Mariucci on Friday, Jan. 24, 2020. The Gophers ended the night with a 6-3 victory over Ohio State.

The second line, which had just lost the team’s top scorer Scott Reedy in the previous game against the USA Under-18 team, scored seven of the ten goals tallied against the Buckeyes. Sampo Ranta and Brannon McManus, mainstays of the second line throughout the season, scored three and two goals respectively while Ben Meyers scored two goals alongside his new linemates.

It was through their performance that Minnesota was able to sweep the then-No. 6 Buckeyes and bring the Gophers back to .500 on the season. The line is expected to stay together moving forward. Reedy is listed as week-to-week with an upper body injury.

While the sweep is a sign the team is moving in a positive direction after a long winter break, they are careful to not get ahead of themselves. Head coach Bob Motzko said he is usually reluctant to declare that the team has turned a corner as saying that seems to invite further setbacks, but the team is feeling positive after the series sweep.

“Overall, I can’t hide that we have a better feeling. We’ve scored some goals lately, we’ve got some wins. It’s a good feeling … our guys have a good demeanor about them right now,” Motzko said.

The player who may be feeling the best out of the group is McManus, who was awarded First Star of the Week in the NCAA and the Big Ten, along with Ranta, who was named the Big Ten Second Star of the Week. McManus said the nominations were the cherry on top of the weekend for himself and for his new line. He felt they made a strong statement with the way they played against such a high-caliber opponent. It was a sentiment shared by his teammates.

“Any time you have confidence, you just want to roll with that. I think you just have to work hard to get your bounces ⁠— that’s what we did last weekend, and it worked. So I think if we work hard again, good things are going to happen,” Meyers said.

But even with a positive atmosphere around the team, the border battle looms. So much so that Motzko was unaware of the accolades that McManus and Ranta had earned until asked about it during a media availability on Tuesday because he had been busy watching game film.

The upcoming matchup against Wisconsin gives Minnesota another opportunity to rise in the Big Ten standings. Currently in fifth place in the standings, the Gophers trail Notre Dame by just one point and Ohio State by four, despite playing two fewer conference games. Meanwhile, Wisconsin is last in the conference standings.

“Right now — today ⁠— it’s really good,” Motzko said. “But it doesn’t mean anything for Friday because Wisconsin’s not going to care about it.”

Minnesota remains six points out of first place, which is shared by Penn State and Michigan State. The Gophers host the Spartans Feb. 7 and 8 and go to Notre Dame on Feb. 14 and 15.