U hosts fellowship for African leaders 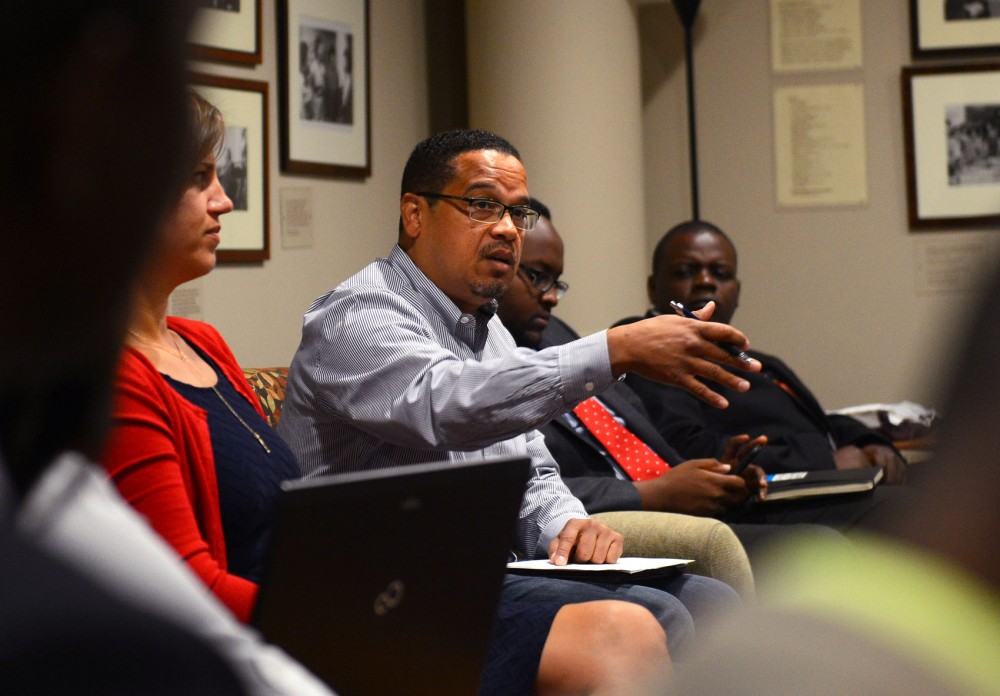 Fifth district Minnesota congressman Keith Ellison discusses political practices with fellows from the Mandela Washington Fellowship in the Freeman Commons of the Hubert H. Humphrey Center on June 30. The fellows hail from 25 different countries throughout sub-Saharan Africa, and they look to further their insight into American politics through their visit.

Youssef Rddad
When people ask Osman Abdal Timbo where he’s from, he says he’s from Africa. When pushed a little further, he’ll reluctantly say he was born in Sierra Leone.
Timbo, a lawyer, advocates for a United States of Africa, a concept that seeks to unify the continent as a single country.
He is honing his political skills as one of 25 African professionals and students from 17 countries attending a six-week program at the University of Minnesota through a U.S. Department of State fellowship intended to teach sub-Saharan African leaders from various backgrounds about managing public services like hospitals and utilities.
The fellowship’s leaders hope the fellows will be able to take what they learn in Minnesota to drive change in their respective countries.
The participants will get opportunities to collaborate with each other to address public management issues in their countries, including issues surrounding housing, political stability, HIV and women’s rights.
“The greatest thing about this program is people are making connections across African countries and with Minnesotans,” said Merrie Benasutti, who directs the program through the Humphrey School of Public Affairs’ Center for Integrative Leadership.
Those attending the fellowship at the University are part of a group of 500 Africans taking part in the Mandela Washington Fellowship across different American universities. All are between 25 and 35 years old.
“Africa is undergoing transformation, and we need to be at the forefront in leading our people,” said Malebogo Portia Motlhabane, a fellow from Botswana. “As young people, we can help transform Africa to be a huge player in the global village.”
Africa has the youngest population of any continent, with 70 percent of its population under the age of 30, according to 2010 United Nations figures.
The fellows are also learning about democratic governance through the University’s program. According to Freedom House, a group that advocates for democracy around the world, 80 percent of sub-Saharan African countries are classified as not free or partially free.
Humphrey School Associate Dean Laura Bloomberg, who teaches a class for the fellowship about addressing challenges as leaders, said factoring in cultural differences is crucial when discussing democratic change.
“I think it’s very important when talking about a cross-cultural context that they know I don’t think the United States is perfect,” Bloomberg said. “I can’t possibly impose a vision of what [democratic processes] would actually look like on the ground in Ghana or Tanzania.”
U.S. Rep. Keith Ellison, D-Minn., met with the fellows Tuesday morning at the University to discuss leadership, addressing the fellows’ questions about governance and public management.
“The idea of us teaching them is ridiculous,” Ellison said. “I think the real idea here is the exchange — what we learn from them and what they learn from us.”
Ellison said during a roundtable discussion with fellows that creating a united Africa might be difficult, pointing to financial difficulties the European Union is facing.
The African Union, a group dedicated to building relations among African countries, was founded about 15 years ago.
“We’re all young leaders, so if we start creating this kind of union among ourselves, it will be easy to collaborate when we’re in positions of power,” Timbo said. He said he plans to run for parliament in Sierra Leone next year.
Delete Image
Align Left
Align Center
Align Right
Align Left
Align Center
Delete Heading