From the mile to the 10k, Blankenship finding success 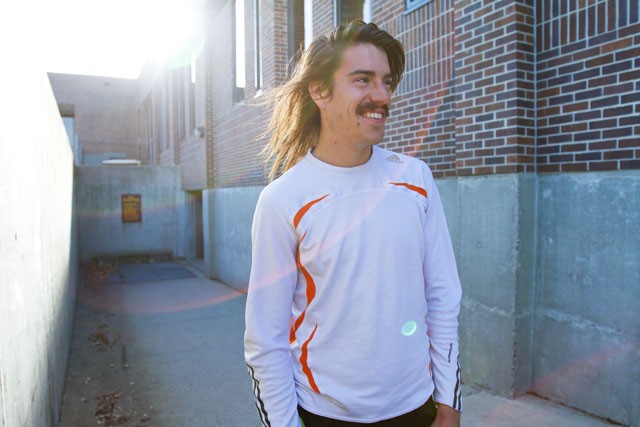 Ben Blankenship gets ready for a cross country practice Tuesday afternoon outside of Beirman Athletic Building.

Ben Blankenship holds the school record in the mile, and coaches have always considered him an elite middle-distance runner who also runs cross country.

Now even he doesnâÄôt know what to think.

In what became a mad dash to the finish line, Blankenship took third in the Big Ten Championships on Halloween, finishing within a second of first place.

âÄúBen really may have put himself in a different level in terms of his cross country at the Big Ten meet,âÄù head coach Steve Plasencia said, calling it the best cross country race of BlankenshipâÄôs career.

The finish had other cross country coaches in the conference talking about BlankenshipâÄôs versatility, Plasencia said. It also raised the question: What the heck is he?

Blankenship, a senior, even joked that he may just try steeplechase this outdoor track season.

While itâÄôs rare for a runner to get to senior year entirely undecided on what specific event best suits his or her abilities, itâÄôs worked so far for Blankenship. The Stillwater-native once advanced to regional action in the five-kilometer and 800-meter run in the same week.

But considering how abruptly heâÄôs arrived in the upper-echelon of cross country runners, it will take a strong showing at SaturdayâÄôs NCAA Midwest Region Championships to prove he belongs.

âÄúI hate to be superstitious but it could go away,âÄù Plasencia said. âÄúWhat he did in Madison [at the Big Ten Championships] should give him confidence going forward.âÄù

Only two teams from each region receive an automatic bid to nationals, and the Midwest region contains No. 1 Oklahoma State and No. 8 Oklahoma.

Barring an upset, the Gophers also have a chance at one of the 15 at-large bids, which go to teams that have beaten other top teams throughout the season. The Gophers have, but also had an ugly 12th place finish at the pre-NCAA meet, missing an opportunity to bolster their resume.

Even if the Gophers didnâÄôt qualify for the NCAA Championships as a team, runners like Blankenship and teammate Mike Torchia would have a chance to advance individually. Plasencia declined comment on BlankenshipâÄôs individual chances because he is focused on the team advancing.

And Blankenship and the team are riding high after their showing at Big Tens. Plasencia noted that it was only the first leg of the âÄúcross country triple crown,âÄù and now all that matters is the second.

âÄúWhen you go from the [Kentucky] Derby to the Preakness,âÄù Plasencia said, âÄúIt doesnâÄôt matter anymore what happened at the Derby because the Preakness is the race that youâÄôre about.âÄù