Minnesota will send nine wrestlers to the season-ending event. 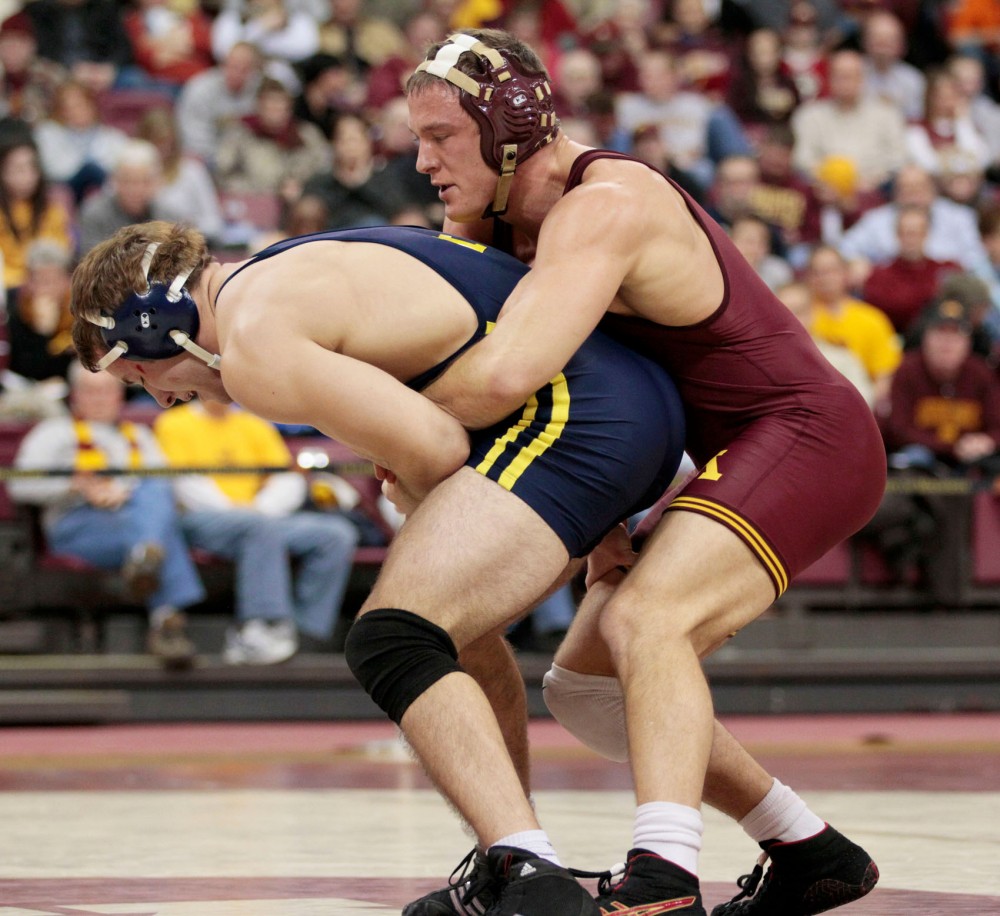 Senior captain Sonny Yohn did not shy away from talking about his third-place performance at the Big Ten wrestling championships.

“I’m pissed off about myself obviously,” Yohn said. “It still hurts, and it’s going to for a while.”

Yohn (197 pounds) lost his first match at last weekend’s championships, but he rebounded to win his next four matches at the tournament and finished third.

“I lost a match I shouldn’t have,” Yohn said. “I made the most out of the situation and still came back, but it’s painful. You can’t really describe how it feels after losing like that when you expect to win.”

Yohn went into the championships, where the Gophers finished second behind Penn State, seeded No. 1 at 197 pounds.

“I went into the tournament favored to win it,” Yohn said. “I should have won it — I was the best guy there — but it just didn’t go my way.”

Despite the loss, head assistant coach Brandon Eggum was impressed with how Yohn rebounded to finish third.

“I know he wanted to win a Big Ten title, but he still had a great tournament,” Eggum said. “Finishing third was the best he could do after losing so he did his job after that point.”

Yohn will have one more opportunity to capture a title as a member of the Gophers on March 15-17 at the NCAA championships in St. Louis.

“For me, this is the most important tournament of my life so far,” Yohn said. “I’ve got to get it done since I didn’t last week.”

One person who believes in Yohn is his younger brother, teammate Cody Yohn (165), a junior on the Gophers.

“He’s come a long way,” the younger Yohn said. “He’s ready to go. He’s wrestling better than ever. He had a little road bump this last weekend, but, in my opinion, it’s better to get it out now. There’s no doubt in my mind that he’ll become a national champion.”

Cody Yohn added that he thinks it’s the fine-tuning of little things that makes “all the difference in the world” for his brother.

There will be 330 individual participants at the NCAA championships, with 13 wrestlers seeded in each weight class.

The top eight wrestlers in each weight class will be dubbed All-Americans after the tournament.

This season, the Gophers have eight wrestlers seeded in the tournament.

Dylan Ness (149) will be unranked at the tournament.

The Gophers won two individual Big Ten championships last weekend in their second place finish. Cody Yohn said those results mean that whoever didn’t win has room for improvement and that he expects to see improvement in St. Louis.

“We’re hungry, probably more hungry than ever,” Yohn said. “Everybody but Tony [Nelson] and [Kevin] Steinhaus can improve — that’s seven guys that can do better than they did two weeks before.”