Roy Griak coached Minnesota’s men’s cross country team for 33 years, and he’s since been an administrative assistant to the school. 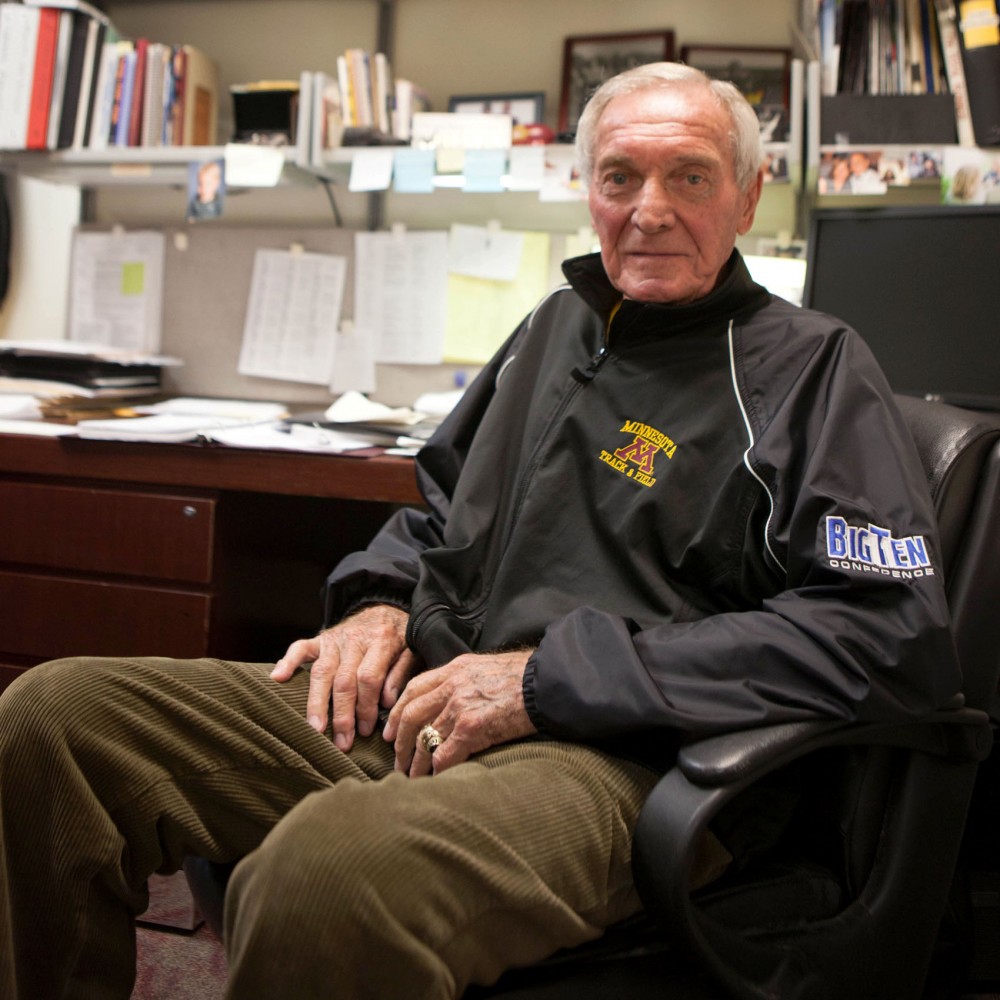 Roy Griak, the Roy Griak Invitational’s namesake, is in his 15th year as an administrative assistant for the Gophers after serving as the men’s cross country head coach for 33 years.

Roy Griak didn’t want to have a race named after him, but Gophers head women’s cross country coach Gary Wilson told him he had no choice.

“I said, ‘You don’t have a vote. You’re retired; I’m not,’” Wilson said. “There was no discussion. It was a committee of one that decided it.”

When Griak, now 89, retired from coaching the Gophers men’s cross country team in 1996, the event now known as the Roy Griak Invitational was called the Minnesota Invitational.

The Griak is one of the largest cross country meets in the nation.

After retiring, Griak, who hails from Duluth, Minn., and currently lives in Plymouth, Minn., has kept coming to work. He has served as an administrative assistant for Minnesota’s cross country and track and field teams for the past 14 years.

“I enjoy the camaraderie with the coaching staff and with the young men involved in track and field and cross country,” Griak said. “It’s a people thing, and I’ve been a people person all of my life.”

Griak’s people skills are evident at work. Almost every person he meets in the hallways of Bierman Field Athletic Building greets him with a smile.

Years after the annual event took on his name, Griak has warmed up to the idea.

“It’s special to be recognized, and I appreciate it, but it’s just a day at the office,” Griak said. “It is a special event, there’s no question about it.

“I’m glad my name’s associated with the best cross country meet in the country,” he added.

Griak was more vocal about the people that made the Roy Griak Invitational happen. He credited the people who set up the golf course and everyone else who helps set up the race and cleans up afterward.

Because of the large size of the Griak, which has races for Divisions I, II, III and high school, a lot of planning is required. Nearly everyone involved with cross country — including Wilson, men’s head coach Steve Plasencia and principal administrative specialist Jo Rider — help schedule and plan the run.

Because of Griak’s age, the former coach said he can’t contribute to the race as much as he used to. Because of his personality, however, there’s no shortage of people willing to help out.

“Obviously he’s old school, because he’s freaking old,” Wilson said. “He’s just one of those very unique individuals that I don’t think [has] an enemy.”

Griak has spent much of his life at the University of Minnesota. He finished his college career here after attending Minnesota-Duluth for two years. Even after coaching for 33 years, he said it wasn’t difficult to keep coming into the office after retiring.

“You become friends. You become more than just coaches and students,” Griak said. “The young men that we have now on the team — I don’t coach them anymore, but I’m around and get to know them and visit with them.”

Griak said coaching is “a 24-hour-a-day job … if you’re doing it right.” He said the transition from a head coach to an administrative assistant was not a difficult one.

“He loves the U obviously, but he loves the kids,” Wilson said. “He’s a life teacher — he coaches life lessons. He always does that.”

Throughout and after his coaching career, Griak was inducted into a series of halls of fame. He says he doesn’t really hang his hat on his inductions, but it’s an honor to be recognized by his peers.

“They mean one thing — that you’re appreciated,” Griak said. “And it’s nice to be appreciated.”

To Wilson, those numbers don’t matter.

“His ledger is not wins and losses, although he’s won a lot,” Wilson said. “It’s more, ‘Did I help this kid get better as a person?’”

Upon retiring, Griak helped Plasencia adjust to being the new Gophers head coach.

“Within the first few days he was on me,” Plasencia said. “He said, ‘Have you called your athletes yet? Have you talked to the guys yet?’”

Plasencia said he relied on Griak during his first few years for feedback.

Fifteen years later, Griak said he’s pleased with the state of the program.

“I think our current staff and Steve [Plasencia] have done a marvelous job,” Griak said. “They have all matured as coaches. They were beautiful people when they came in, but as far as teaching and rapport with the students, it’s second to none.”