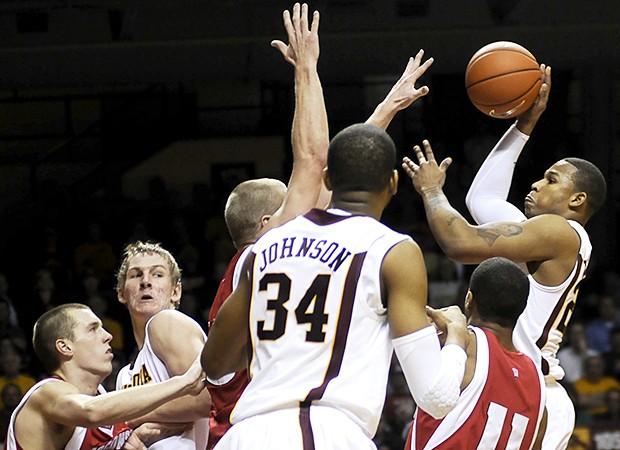 The Gophers hadnâÄôt won a close game late since a Jan. 15 road win against Wisconsin. In that game, junior guard Lawrence Westbrook took over, hitting a game-tying three-pointer in the final seconds and scoring nine overtime points. A lot has happened in the month and a half since, but Westbrook and the Gophers did it again Wednesday night against the Badgers. Westbrook scored all of his team-leading 15 points in the final nine minutes, including the game-winning free throws with 29 seconds left, as the Gophers survived a late Wisconsin rally to win 51-46. The shortest player to play for either team, Westbrook scored all of his late points slashing to the basket. Taking a pass from freshman center Ralph Sampson III after a Badgers miss in the final minute, Westbrook raced down the floor and drove straight into a crowd, being fouled by Bloomington-native Jordan Taylor with the Gophers trailing by one. He swished both free throws. âÄúI saw the way the game was going, and I think I can take over any game at any time,âÄù Westbrook said. âÄúI put it on myself.âÄù Coach Tubby Smith shook up the starting lineup, taking Westbrook and point guard Al Nolen out of it for the first time in the Big Ten season in favor of Devoe Joseph and Blake Hoffarber. Smith said he wanted to take some pressure off Westbrook and Nolen, who he thought had been playing âÄútight,âÄù and suggested that WestbrookâÄôs freshness was probably a factor in his late-game surge. Westbrook, who scored a career-high 29 points against the Badgers in January, slumped for much of February, and came into the game having scored six or fewer points in five out of his last seven games. âÄúI was kinda mad, you know, not because they were starting but because I just want to play good,âÄù Westbrook said. âÄúI think I used it for fire.âÄù Junior forward Damian Johnson added 11 points and five rebounds for the Gophers, who didnâÄôt trail until the final six minutes, when a Marcus Landry lay-in made it 39-38. Minnesota trailed by five points with 2:47 left before Westbrook scored its final 10 points. It was a welcome turn for a team that failed to score in the final six-plus minutes against Illinois in a close loss Thursday, and saw Penn State end a five-point win on a 10-0 run on ValentineâÄôs Day. They looked a lot different in front of a packed Williams Arena announced at 14,625, which knew how important a win over the Badgers was for the teamâÄòs NCAA tournament chances. Both Westbrook and Johnson agreed the arena was the loudest theyâÄôd ever heard it. âÄúWe havenâÄôt handled late-game situations very well,âÄù Smith said. âÄúBut all of those were on the road. Tonight we showed a lot of poise.âÄù