The joy of working with your hands and the even greater joy of knowing you may eventually pay back your college loans. Oh yeah, and it tastes spectacular. Baking your own bread is a fail-proof formula for total bliss. 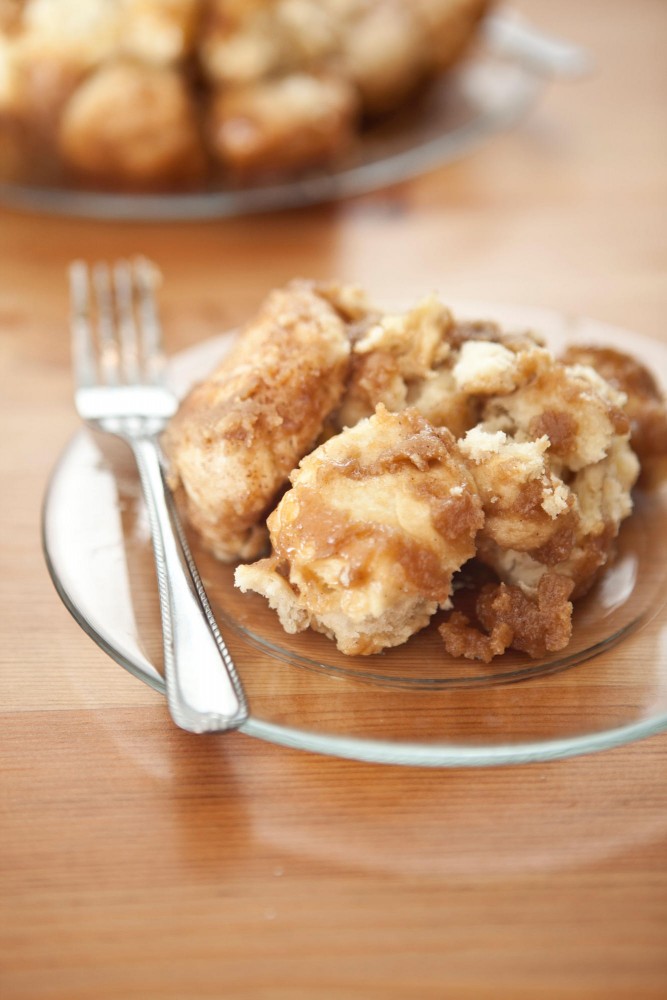 A favorite of many, monkey dough is usually served hot so the segments can be easily pulled apart. The dough is rolled into balls and coated in melted butter, cinnamon, and sugar.

Nearly every culture on earth has some sort of bread at its culinary core, from the dainty risen loaves of the French to the spongy flatbreads in East Africa.

The reason for this ubiquity is simple: Bread turns hard-to-digest but nutrient-packed grains such as wheat into a delicate, delicious platform for any other food. Whether it be your mommaâÄôs PB and J (cut into triangles, of course) or dadâÄôs lamb curry over naan (extra spicy), evidence of this ancient glory surrounds us to this day. Retract your lens from the past, however, and bread has almost completely retreated from home production. It is now a convenience product, a certainty on our Rainbow radar, an inevitability with an always fluctuating price. Quite honestly, most of us have probably more earnestly considered attempting home-made Hot Pockets than a loaf of bread, a fact that breaks my heart a little. Though homemade Hot Pockets do sound pretty awesome âÄ¦

The fact of the matter is, baking bread from scratch is a fundamentally fulfilling activity for our over-convenienced souls. Kneading the initial dough by hand is almost meditative in its methodical repetition âÄî not to mention an awesome forearm workout. While the bread rises you have three hours of free time that can be used for anything, and the reworking of dough builds in a study break.

The rolling and shaping of the loaf allows our baker infinite artistic license, a freedom not always available to my pre-med friends. Finally, even the smell wafting from the oven as your bread bakes seems to trigger deep-set feelings of contentment and peace.

Of course, if all of this glowing hippie talk wasnâÄôt enough to get you interested, the fact remains: Baking bread is cheaper than buying it. So get out there, grab some flour and a jar of yeast and start to love the food that you knead most!

The basic process for every kind of risen bread is similar, and with this template you can go a million different directions. The first loaf is a basic French baguette, flavored solely from a little salt and the complex interactions between yeast bacteria and the gluten in wheat flour. The variations that follow are longer-lasting and more rich, though slightly more difficult.

Mix flour, salt and yeast together in a large bowl. Pour in a cup of water and mix with a spoon until thick; then dig in with your hands. Continue to knead (mixing the water in with the flour) until dough forms a smooth, round ball that does not stick to your fingers. If the dough is too sticky add more flour. If itâÄôs too dry, more water. Cover the bowl with plastic wrap and leave in a warm place for one to two hours (or in the fridge for eight to 12 hours overnight) until it has roughly doubled in size. Remove dough from the bowl and work it into whatever size loaf you want (using a rolling pin and folding over). Make sure that the dough comes together at a single seam, and pinch that seam closed between your fingers. Lay the dough seam-down on your baking tray or loaf pan (so the air released by the yeast cannot escape), cover and let rise again for an hour. Preheat your oven to 400 degrees and then bake the bread for 20 to 35 minutes until golden brown. It should sound hollow when you knock on it. Enjoy fresh, or freeze and reheat in the oven at your convenience.

The previous French loaf is delicious, but with a little fat and an egg or two it becomes something completely new. At the same time, more fat allows the bread to stay fresh longer. Try replacing a little of the water with two tablespoons of any oil or butter. Add just before the water, and make sure to mix thoroughly through the flour with your hands so that it doesnâÄôt clump up. Replace some (or all) of the water with milk, preferably of a higher fat content (2 percent or whole). Add an egg or two (whisked separately in a bowl as though you were scrambling them) after the oil and before the water, again mixed through the flour thoroughly with your hands first.

A little sugar (1 to 2 tablespoons) is nice, and brown sugar is fun sometimes. Nearly anything on earth can be mixed into the flour-salt-yeast mixture before the oil and water, and I seriously mean anything.

A tablespoon or three of spices or herbs (basil and oregano are great; paprika is interesting and garam masala is fun. Saffron is phenomenal if you donâÄôt mind shelling out exorbitantly for flower parts). Dried fruit is always good, as is a little orange rind or lemon zest. Replace some (or all) of the flour with wheat, rye or others; youâÄôll need to increase water and rising time slightly. You can add up to a quarter cup of loose leaf tea or ground coffee to the flour, creating a lot of fun flavor combinations (dark roast rye, for instance, or a bloody good Earl Grey whole wheat).

If you make some dough with egg, fat and sugar, you might consider giving the Chicago classic monkey bread a shot: After the first rise, roll tablespoon-sized chunks of dough into little balls and coat them in cinnamon-sugar (easiest inside a gallon zip-close bag). Then make up a mixture of   3 / 4 cup oil or melted butter,  3 / 4cup brown sugar (beaten into the oil so that it mixes through), 1 teaspoon cinnamon and enough flour (mixed in at the end) to make it crumbly âÄî rather than syrupy. Layer the dough balls in a well-greased bundt or loaf pan, dolloping crumbly sugar mix over the dough in between each layer. Top with a layer of crumbles, pre-heat the oven to 350 degrees and bake for 25 to 30 minutes or until golden brown and oozing. Turn over onto a plate and serve fairly hot with everyone pulling apart the treat like the ancient primates
we are.