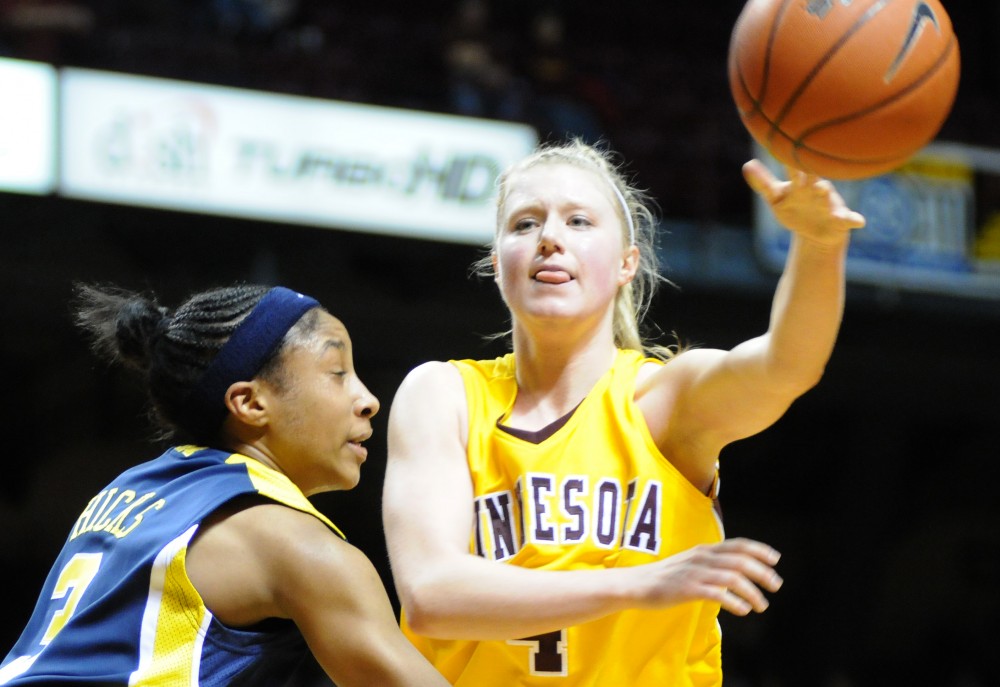 Senior guard Emily Fox looks for an outlet as she faces some tough pressure against Michigan during Sunday’s 52-46 comeback win over the Wolverines at Williams Arena.

The past three Minnesota womenâÄôs basketball games leading up to SundayâÄôs affair with Michigan displayed two very different Gophers teams. In those three games, Minnesota picked up wins against the top two teams in the Big Ten, with a loss in the middle to an average Iowa squad. The first half of SundayâÄôs game against Michigan displayed the Gophers team that lost to Iowa, but the better Gophers squad returned for a second-half comeback to lead Minnesota to a 52-46 victory in front of 7,221 fans in Williams Arena. âÄúThis is college sports. I think we have all seen enough of college sports to know what can happen, especially in the Big Ten,âÄù Gophers coach Pam Borton said. âÄúItâÄôs going to be a battle every night.âÄù Minnesota (13-5 overall, 5-2 Big Ten) has flourished in the underdog role by knocking off the top two teams in the Big Ten: Indiana on Jan. 8 and No. 15 Ohio State on Jan. 15 âÄî the first win in Columbus for the Gophers in 23 attempts. But sandwiched between those two games was an embarrassing 74-57 loss at Iowa, a team that sits in the middle of the pack in the Big Ten. Instead of harnessing the momentum from a key win against the ranked Buckeyes, the Gophers played down to the weaker Michigan opponent as they did at Iowa, trailing 10-2 six minutes into the first half against the Wolverines. Michigan (9-9 overall, 2-5 Big Ten) was hot from 3-point range to start the game, shooting 55 percent in the first half to stay ahead of a rusty Minnesota squad. Michigan guard Veronica Hicks capped off the strong first half for Michigan by hitting a 3 with 40 seconds remaining in the first half, putting the Wolverines lead at 28-20. âÄúIt took us a little while to get going,âÄù senior guard Emily Fox said, âÄúbut I think we did a great job in the second half. We switched to a zone, which they couldnâÄôt handle.âÄù Two straight 3-pointers to start the second half by Katie Ohm helped Minnesota regain some of the momentum from its previous game. But the Gophers continued to struggle from 3-point range, finishing just 25 percent shooting from beyond the arc. However, it was junior forward Ashley Ellis-Milan who took over down low in the second half for Minnesota, scoring 15 of her game-high 19 points in the second half, along with a game-high nine rebounds. âÄúSheâÄôs our emotional leader out there,âÄù Fox said of Ellis-Milan. âÄúShe got some big offensive boards and got some fouls. That really lifts us and gives us confidence.âÄù Borton told her team to get the ball inside more in the second half, resulting in the Gophers going 12-of-15 from the free throw line after no free throw attempts in the first half. âÄúThat was the big thing for us to get the ball inside,âÄù Ellis-Milan said. Ellis-Milan was also a catalyst for the Gophers win at Ohio State, leading the Gophers with 17 points and helping slow down Buckeyes star center Jantel Lavender. Ellis-Milan got to the free-throw line on consecutive possessions mid-way into the second half, hitting all four attempts to bring the Gophers within 2 points of the lead at 37-35. On the next possession, Minnesota again found Ellis-Milan inside, and the junior hit her shot after a spin to the middle to tie the game at 37-37. The Gophers would cruise past the Wolverines the rest of the way. âÄúOne game does not define who we are, whether itâÄôs a bad game or a good game,âÄù Borton said. Honored Jersey Becoming the fifth Minnesota womenâÄôs basketball player to have her jersey hung from the rafters of Williams Arena, Deb HunterâÄôs No. 13 jersey was unveiled prior to SundayâÄôs game. HunterâÄôs career with the Gophers spanned from 1979-1983, and the Cloquet, Minn., native still holds MinnesotaâÄôs record for career assists (532) and steals (413). The 5-foot-10-inch guard was a two time Gophers MVP, Honorable Mention All-American in 1982 and was named to the first All-Big Ten First Team following her senior season in 1983.