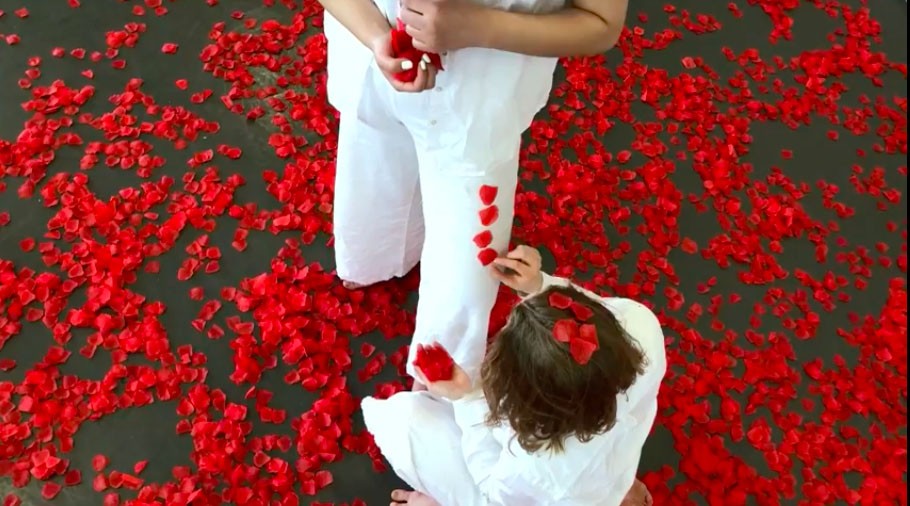 Four dancers in white enter from the left side of the screen, each carrying a bucket. They gaze directly at the camera and dump the contents of their buckets on the floor wordlessly after a couple of seconds.

It’s a flurry of red. Around 7,000 rose petals fall to the ground, coating the once plain backdrop in a sea of crimson.

In Ally Paitl’s capstone dance project, “Petaled,” which will be released this weekend, the senior works to reclaim femininity, subverting traditional expectations of how women and their bodies are expected to move and be seen in mass media.

Although it’s easy to get caught up in the beauty of the dancers’ motions as they toss, roll and play in the petals, Paitl pairs surface-level sweetness with something much more complex.

“A lot of times movements that choreographers put in music videos are more just flirtatious and [beg] the viewer to look at [women] in a certain way,” Paitl said. “We play with that.”

At one point in the video, the dancers seductively eat the rose petals one by one, only to retch them up a couple seconds later.

“Petaled” started last spring as a performance piece for Paitl’s composition class. As the piece’s choreographer and artistic director, Paitl said she wanted to dive deeper into her experience with the male gaze as a dancer through a piece she was familiar with.

Petals come to represent femininity in multiple forms in her piece.

The all-white ensemble brings associations of marriage and purity, the flowers emblematic of a walk down the aisle.

But the petals also highlight aspects of womanhood not so easily-accepted in the media.

Horstmann’s petals fall out of her dress to simulate period blood, and Marks’ depict underarm hair in full bloom.

“In day-to-day conversation, we don’t talk about what it means to be a woman [or] about all of the labor that goes into [that],” Horstmann said. “To be relevant, you need to be beautiful. And that’s also very ugly if you think about it.”

Horstmann said when people show their best side on social media, it’s easy to forget they also have flaws.

“[In “Petaled”] we’re showing these parts that aren’t beautiful,” she said. “It’s saying you also have to look at these [pieces] that are also part of us.”

Paitl said creating the project with all female collaborators was intentional. Breen said this was a unique experience for her.

“It’s interesting because dance has always been a field dominated by women in terms of the dancers,” she said. “But for much of known history, men have been the top choreographers and directors of dance companies, so working with all women is different and exciting.”

Near the end of the film, the petals’ softer connotations are emphasized.

Dancers carefully place the petals on each other, decorating arms, legs and hair with little circles of red.

Paitl said she wanted to evoke the feeling friends get when they do each other’s makeup or practice self-care.

“Beauty isn’t always this destructive or divisive thing. Sometimes you take care of each other through beauty,” she said. “Sometimes it’s a really intimate and soft experience rather than something you have to be mad about. And the idea that these two things can exist at the same time is important.”