The skin they’re in 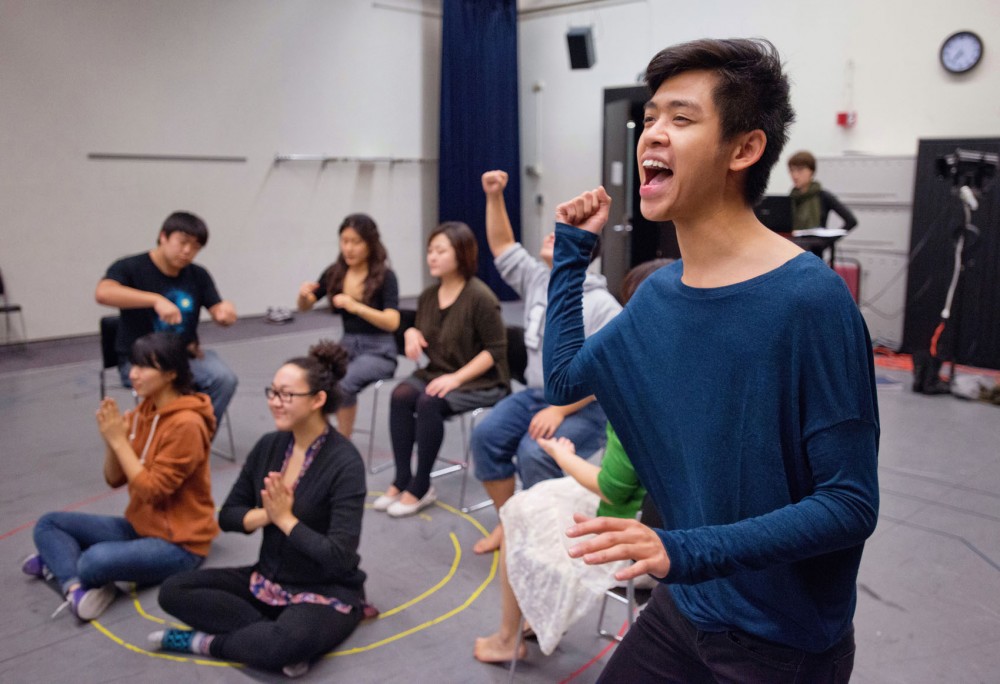 What: “Under My Skin: Asian American Student Stories”

Something wasn’t working. The group of eight had just run through an improvised dance to M.I.A.’s “Banana,” which they’d selected only moments before as the tentative opening song for their collaborative performance art piece, “Under My Skin.”

Rick Shiomi thought for a moment, then stood up to coach his performers.

“Become a banana,” he said.

“Under My Skin” features a mix of Asian and Asian-American students and recent graduates, only about half of whom are theater majors, in a series of skits and poems about their identities, hang-ups and histories.

They chose to open with “Banana,” cast member Audrey Park explained, because of the word’s slang use as a term for Asians who are “yellow on the outside and white on the inside.”

The cast then did its best to mimic bananas, some by extending their arms and “peeling” themselves open, others by bending their bodies into upright crescents.

Part improvisation, part routine, Shiomi said the choreography develops between his input and the actors as they test what works and what doesn’t.

“There’s a fine line between being too literal, that’s obvious and too abstract,” he said.

Shiomi is the artistic director of the Minneapolis-based Asian-American theater company Mu Performing Arts. He’s orchestrated his “Under My Skin” project once already at Augsburg College.

After a few more fruitless attempts to capture the song’s literal subject in dance, the group settled on a more abstract interpretation where they mimed spelling out the word itself.

“Under My Skin” has no overarching narrative. Each scene is defined by a written piece from one of the cast members.

In one, “Oceans,” she laments losing touch with her Korean heritage, using hands as a point of comparison.

“My grandfather’s hands are big,” she begins. “Like the distance between me and him, they are immense.”

To her, the legacy passed down by her grandparents is all but shattered because she refused to shoulder “the roughness that history leaves on a surface,” Park said.

It’s all she can do to keep herself from forgetting the last of her parents’ language.

“No matter how much I try to reconnect with my history,” she later explained, “I lose my grip.”

Park didn’t train in theater at the University of Minnesota, but she said she has some experience in front of an audience from reading her poetry at the Artists’ Quarter and Kieran’s Irish Pub.

While many of the poems also deal directly with issues of ethnic identity, others confront universal issues — some more serious than others.

Naomi Ko, a recently graduated English and art history major, wrote three bits for “Under My Skin” that she said were informed not just by her experience as a Korean-American but as a Minnesotan.

One, called “Project Sadness,” is a dryly comedic introduction to her struggles with depression. She recounted how a roommate told her she didn’t look sad enough to be considered depressed.

“That pissed me off,” she said.

Her monologue from that point was a detailed account of her quest to make herself visibly unhappy by renting every tear-jerker she could find.

Conversely, senior Woo Yeon Jang’s poem is one of unfettered optimism. Jang is majoring in theater, but as an international student, she’s had difficulty landing roles in most plays.

Still, she identifies Minnesota as the place where “her dream is shown in the sun.”

“Under My Skin” compiles such diverse material that it’s difficult to characterize it outright, but Bomi Yoon, a graduate student and contributing writer, believes that’s exactly the point of the piece.

“We’re all very different people,” she said. “We have more to offer, things that don’t just speak to our experiences as Asians or Asian-Americans.”

Yoon said she was frustrated at first with Shiomi’s literal choreographing of their prose but eventually changed her mind.

“I realized there’s really no way for the audience to get ‘under our skin’ unless we act it out.”

Park had a similar reaction.

“As a person who’s more used to just speaking my words, it was kind of weird.”

But she said she thinks it ultimately helped to clarify her message and is excited for the opportunity to perform her own work.

“We’re getting to say who we are. How many chances will we get to do that?”