The SSA honored the 50 year anniversary of the country’s freedom. 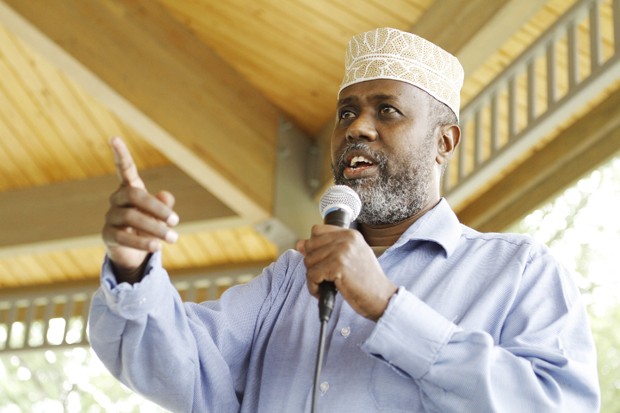 Saadiq Enow speaks to members of the Somali Student Association Monday at the Wabun Picnic Area.

Some of them had not seen Somalia, some did not fully understand the Somali language and others had lost family members in the country’s violent civil war.

But the members of the University of Minnesotas Somali Student Association listened attentively Monday to Somali historian Saadiq Enow as he spoke about the history of their country as the group celebrated the country’s independence.

In an effort to refresh their knowledge about Somalia, SSA celebrated the 50th anniversary of the country’s independence in Minnehaha Park, featuring guests like Enow and Ahmed Tajir, an Imam at the Umatul Islam Center in south Minneapolis.

Somalia became a sovereign nation July 1, 1960, after U.N. directives following World War II called for its independence. Land once claimed as protectorates by England and Italy merged and became an independent state within boards drawn by the two countries.

Enow, a professor at East Africa University in Somalia, was more like a teacher than a speaker. He engaged the students in a dialogue by asking questions to guess their level of understanding about Somalia’s history and language.

Enow talked about the fact that separate regions of the country were colonized by four different countries — England, Italy, France and Ethiopia.

Only five members of the men who formed the Somali Youth League, the political party who fought for the country’s independence, could read and write, Enow said, but they had a mission and were devoted to uniting the country.

The members of SYL were almost the same age as SSA members are now, Enow said, and their mission to unite the country transcended ethnic considerations.

Although Somalia marked the 50th anniversary of its independence July 1, University senior Saida Hassan said she’s skeptical if there is actually anything to celebrate.

“Somalia is not free today if you really think about it,” she said.

In Somalia, Al-Shabab, an insurgent group who affiliates itself with Al-Qaeda, is staunchly opposing the Transitional Federal Government, an internationally recognized government.

Al-Shabab, which controls much of southern Somalia, recently banned watching the World Cup in areas they control.

Abshir Mohamud, SSA president, said the main reason behind organizing the event was “to bring a sense of unity between the students and the community.”

He said he is aware of the unceasing violence going on in Somalia, but that will not deter him from organizing a celebration of the country’s half-century of independence.

Ahmed Tajir advised the students to be better Muslims and good citizens of this country.

Ahmed Tajir said he visited the Hennepin County’s Sheriff Jail last year and officials told him that 845 young Somalis were detained between January 2009 and October 2009. He said the official told him that 90 percent of them were youth.

He advised SSA members that they should steer clear of drugs and violence and said “the future of Somalia depends on you.”

Adan Omar, who recently graduated from the University with a biochemistry degree, said his parents brought him here to get a decent education and to become a good citizen.

Abukar, whose father and uncle were killed in Somalia’s civil war, said the event was a “refreshment for the mind.”