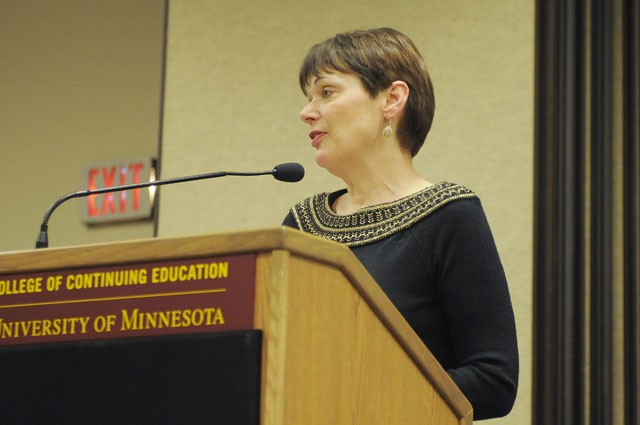 Sen. Sandy Pappas speaks at Friday’s Oxfam America Hunger Banquet in St. Paul. The banquet marked the end of the first International Women's Week and highlighted the struggles women across the globe share.

Deqa Muhidin was expecting a lot more than 4 ounces of rice and a glass of water for dinner when she attended Oxfam AmericaâÄôs Hunger Banquet on the University of MinnesotaâÄôs St. Paul campus Friday.

She joined more than 200 people for the interactive experience that explored issues like poverty, hunger and womenâÄôs rights by placing participants in the very different realities of men and women around the globe.

Oxfam America, an organization dedicated to addressing poverty and injustice worldwide, is using the anniversary to involve communities across the nation in activities that draw awareness to womenâÄôs challenges, Jim French, an advocacy organizer for Oxfam, said.

He said he was determined to have an event in the Twin Cities because of local efforts to address world hunger, particularly by U.S. Rep. Betty McCollum, D-Minn., whom he called “a champion of global food security.”

Each person received the short biography of an actual person from around the world and attempted to get a taste of that personâÄôs situation during the banquet.

About half of the audience, including Muhidin and the 25 volunteers for the event, represented those with meager incomes and sat on the floor for their meal of white rice to characterize the 50 percent of people who live off $3 or less per day, French said.

Fewer sat in chairs, representing the middle-income group. A portion of beans was added to the helping of rice.

“Living this experience for the night is only a simulation,” Hanna Rusch, volunteer coordinator for the event, said. “We canâÄôt actually show how it is to live in poverty and hunger, but hopefully people can leave with some tiny understanding.”

Women were served last to illustrate a situation all too familiar for some participants, including Elizabeth Rukungu and Beaudelaine Pierre, international students at the University who acted as emcees for the event.

Runkungu, originally from Kenya, said in her culture the situation in many households is much like the interaction between lions and lionesses. Though lionesses work hard to hunt for their families, she said they can only eat after the lion and her cubs have had their fill, giving her the greatest burden and the most potential to go hungry.

Pierre agreed and pointed to examples from her country, Haiti.

“People think hunger is about food, but itâÄôs about power,” Pierre said. “We can empower women through training programs and policies that make their lives more sustainable.”

Roughly three of every 20 people who attended the event received a dinner of pasta, salad, a beverage and dessert at tables with white tablecloths and place settings. They represented the worldâÄôs high-income population.

Glenn Corliss, a volunteer with sponsoring organization Compatible Technology International, was one of the lucky few to eat a complete meal that evening.

“This illustrates the problem of poverty and food distribution in many ways,” he said, motioning to those sitting on the floor and eating rice. “ItâÄôs not just the food but the relative discomfort. To be honest I feel privileged and a little shameful.”

The collaborative nature of the event attracted University students and faculty, as well as community members, activists and high school students.

The topics raised had a particular resonance for Sarah Marketon, a high school junior who invited fellow members of Future Farmers of America to make the one-hour trek from their community to the Twin Cities for the event.

Marketon just received the Borlaug-Ruan International Internship, which will fund an eight-week trip to Africa, where she will study issues of food security, like those introduced through the banquet, she said.

She said she plans to attend the University to study agricultural education.

“I donâÄôt necessarily want to do agriculture,” she said. “I want to go to other countries and teach how it can be done so that people can improve their lives.”

Like Muhudin, Marketon and her guests said they were still hungry and planned to go out to eat after the banquet but felt lucky to be able to do so.

Morette, who spoke about her personal experiences as a farmer and president of a womenâÄôs association in her home community in Haiti, said she hopes the promises for action from those who attended the event are not short-lived.

“I definitely think action should be taken so that everything I said will not just stay in this room,” she said. “I would like to see all these promises kept.”

International WomenâÄôs Week continues Tuesday with a discussion about the sexual exploitation of native women. The event will be held at 4 p.m. in the Social Sciences Building, Room 1314. All of the weekâÄôs events are free and open to all.