Minnesota closes out Michigan State in first game of series 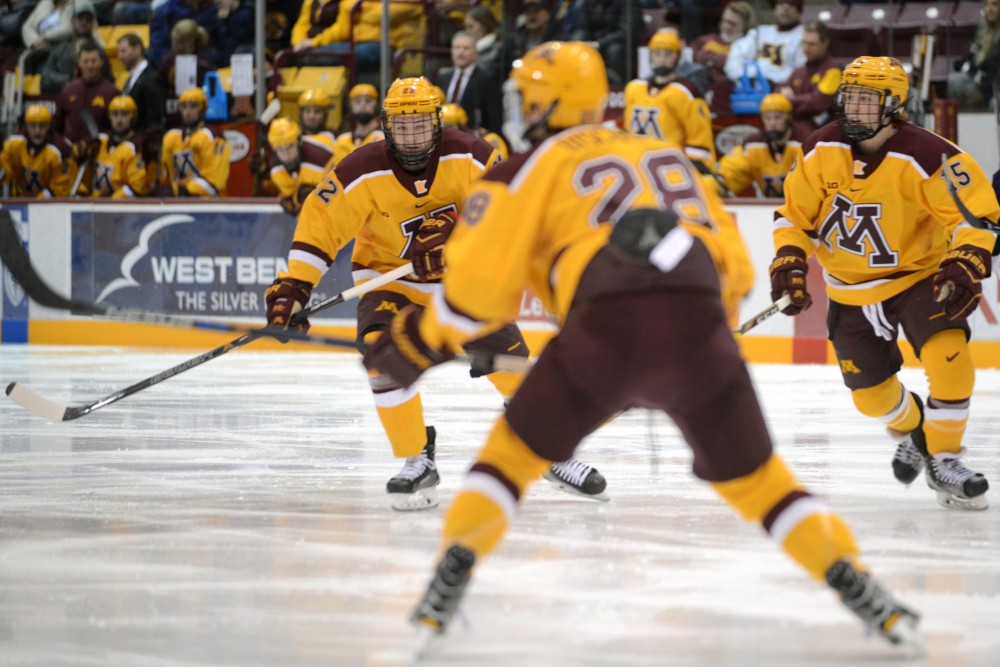 Sophomore forward Tyler Sheehy skates down the ice at Mariucci Arena on Feb. 4, 2017.

It was tough near the final minutes, but the Gophers saw their top forwards come in when they needed him.

“I didnt really know coming into the game where I was at,” Sheehy told reporters Thursday. “I’ve just got to be thankful for my teammates over these past three years.”

Sheehy scored two goals and an assist, including the game-winner with less than three minutes left in the third period. Sheehy played his 100th game with the Gophers Thursday. His assist in the game propelled him to 100 points with Minnesota and he passed that mark by the end of the game to end up at 101 points.

Sheehy is the 84th member of the 100 points-club at Minnesota. On top of Sheehy’s late game heroics and the personal accomplishments, it was an interesting game for the Gophers.

“That second period was pretty wild,” Sheehy told reporters Thursday. “[It was] kind of a ‘yo-yo’ game there, with us getting a couple, then they got a couple. It made the third period a little tense.”

The game featured two major penalties in the second period, one for each team, but the teams didn’t score on either of their five-minute man-advantages. Instead, Minnesota scored twice while Michigan State had the power play, and the Spartans scored once while the Gophers had their man-advantage, leaving the score at 4-3 Minnesota after two periods.

There were two goals scored from beyond the offensive blue line for each team as well. In the first period, forward Jack Ramsey scored on a dump-in play, tying the game at 1-1. In the third period, defenseman Butrus Ghafari scored the game-tying goal against Minnesota on a dump-in that bounced off of goaltender Eric Schierhorn’s leg, leaving the game at 4-4 almost halfway through the third period.

The Gophers completed this win on the heels of being swept by Michigan last weekend, and in their past 10 conference games, went 1-8-1.

“At this stage, we’ll take a win,” head coach Don Lucia told reporters Thursday. “That’s the most important thought for us.”

The Gophers scored more goals Thursday than they did in both games combined against the Wolverines in their series last weekend. Minnesota also didn’t have a lead in shots in either game against Michigan, and Thursday the offense led the shot total to be 39-22 in favor of the Gophers.

Minnesota and Michigan State will have a rematch in the series finale as a part of the Big Ten Super Saturday from Madison Square Garden in New York City.