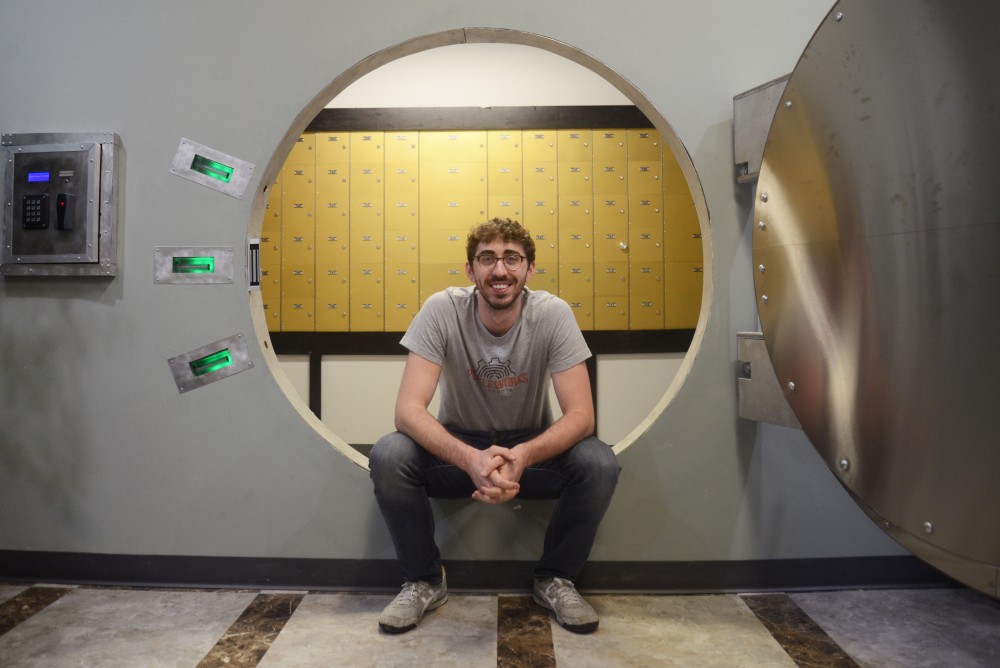 Mechanical engineering student Kenny Hubbell poses in an escape room he constructed at Puzzleworks on Wednesday, April 12, 2017 in St. Paul.

During fall 2016, the University of Minnesota student started building an escape room with his wife, Tessa Hubbell. But it was too much work on top of class, so he took the spring semester off to focus on his new business venture: PuzzleWorks, which opened mid-March.

Hubbell said his background in coding and electronics makes his production stand out.

“A huge priority of ours was the production value,” Hubbell said. “We wanted people to say, ‘Wow, this scenery and backdrop is so cool.’”

Participants who pay to explore escape rooms like PuzzleWorks typically solve a series of puzzles to find an exit, often under a one-hour time limit.

Since he and his wife solved their first escape room challenge two years ago, the duo are now avid escape room goers. This enthusiasm led to the creation of PuzzleWorks, Hubbell said.

“We started throwing around the idea that we could probably do one ourselves. It was just some brainstorming and original flow,” he said.

Hubbell, who has a psychology degree and returned to the University to study mechanical engineering, said he drew from what he’s learned about coding and circuitry to design the room.

“It was all really good groundwork for what we’re doing here,” Hubbell said.

Tessa played a key role in designing the puzzles, he said.

The main room at PuzzleWorks is modeled after a bank vault. Participants are encouraged to think like a bank robber.

“We know that people love bank heist movies. You’re always cheering for the person to pull off the heist,” Hubbell said. “We wanted to give people the opportunity to do that themselves.”

University mechanical engineering student Travis Zweber recently went to PuzzleWorks with his friends. He said it was his first time in an escape room.

“I didn’t really know what to expect, and it was just really cool and surprising,” Zweber said. “I was just thinking of all the different circuitry and coding that went into it.”

Similar rooms have popped up across Minnesota for the past year, said Logan Giannini, director of operations at Mission Manor, another Minneapolis escape room.

He said when he founded Mission Manor in 2016, it was one of the first five rooms in the state. Right now, there’s about a dozen, he said.

“So many rooms have opened in the last four months. It’s really interesting to see how fast this is growing,” Gianni said. “Typically in any other industry this is a bubble that’s going to burst, but this is very unique, and I think it will settle. You can only really go to an escape room once.”

The interactive nature of escape rooms keep people coming through their doors, he said.

“It’s not a movie, it’s not an arcade, it’s a narrative experience. You feel like you’re stepping into another world,” Giannini said.

Giannini, who has not been to PuzzleWorks, said he thinks the immersive bank vault scenario and detailed production are its key strengths.

He said it’s more important for rooms to be engaging than for them to have high tech. Still, he said, creative technology can’t hurt.

“It’s a mix,” he said. “You want to have puzzles and good production.”