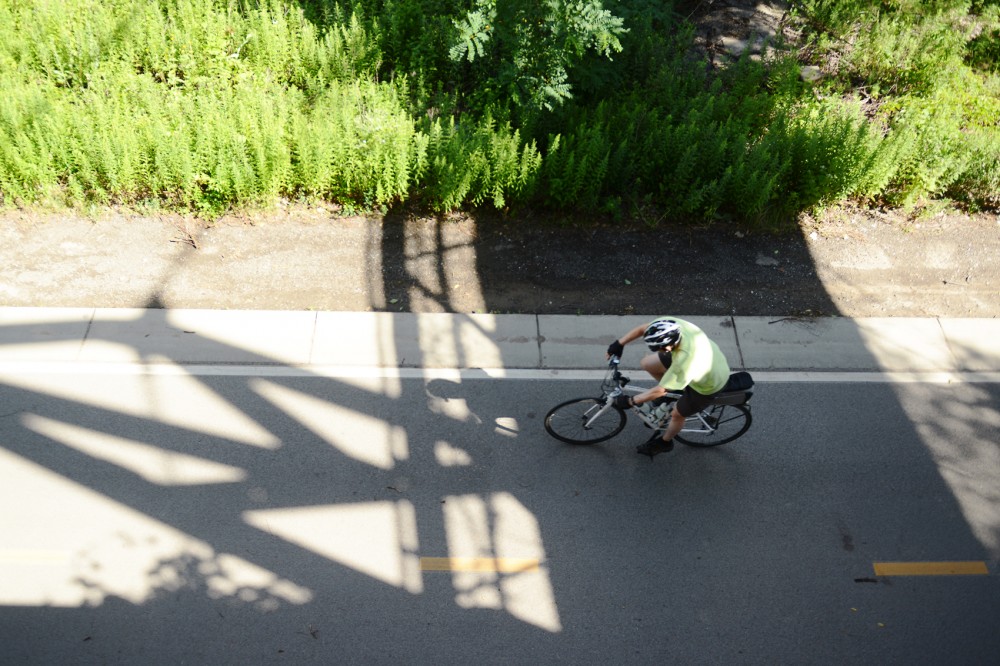 The Dinkytown Greenway's funding is in question after a two-year struggle to convince the University of Minnesota to put up signs on the path that would tell users of the Greenway where they are. The University does not want to be liable for damage to the signs.

After two years of preparation and designs, a Dinkytown Greenway project has stalled.

The Connecting U Neighborhoods project, designed to build kiosks and direction signage for users of the Dinkytown Greenway, sputtered because it has no single owner to maintain it and look after insurance.

The project, led by the Marcy-Holmes Neighborhood Association, began in 2014 after the Greenway opened.

Chris Lautenschlager, MHNA interim executive director, said the association ran the project from the beginning to promote the Greenway.

Financed by the Good Neighbor Fund, the project would create signs and kiosks for Greenway users to find their way, locate nearby businesses and restaurants and promote the Greenway.

With about $50,000 from the GNF, Lautenschlager said, the MHNA hired a third party to design navigational signs and kiosks over two years.

The project would help travelers find their way to different University of Minnesota neighborhoods and businesses, said Richard Lang, designer at Visual Communications, the group that designed the kiosks.

“Most neighborhoods are not immediately on the Greenway or business district,” Lang said.

Ted Tucker, original member of the MHNA Greenway project board, said the goal was to connect all neighborhoods involved.

Once designs were completed, Lang said, meetings were held with community members to decide from a number of possibilities. At the meeting, attendees also decided someone would need to take over maintenance and insurance for the project.

MHNA looked to University representatives, Tucker said, but they seemed hesitant and said ownership wasn’t part of their plan.

Lautenschlager said MHNA can’t take on the role because the insurance costs are beyond their budget.

He said the Greenway itself hardly enters Marcy-Holmes, and MHNA already put work into designs for the project.

Throughout the design stage, no one asked who would take ownership, said Jan Morlock, president of University of Minnesota Government and Community Relations.

“The University can’t take ownership because the signs are not University property,” Morlock said.

She said a third party will likely need to take ownership. In the meantime, no kiosks or signs are being built.

Lautenschlager said since the project stalled, MHNA wants the Minneapolis City Council — including Ward 2 and 3 Councilmen Cam Gordon and Jacob Frey — to push the project forward.

Gordon, who championed the Greenway in 2013, said the council would need to make room in its budget to take ownership of the project, but it would be an asset to the Greenway.

Still, MHNA negotiations with the University continue. Tucker said the kiosk project is a good candidate for Good Neighbor Fund dollars, as it would connect business and residents.