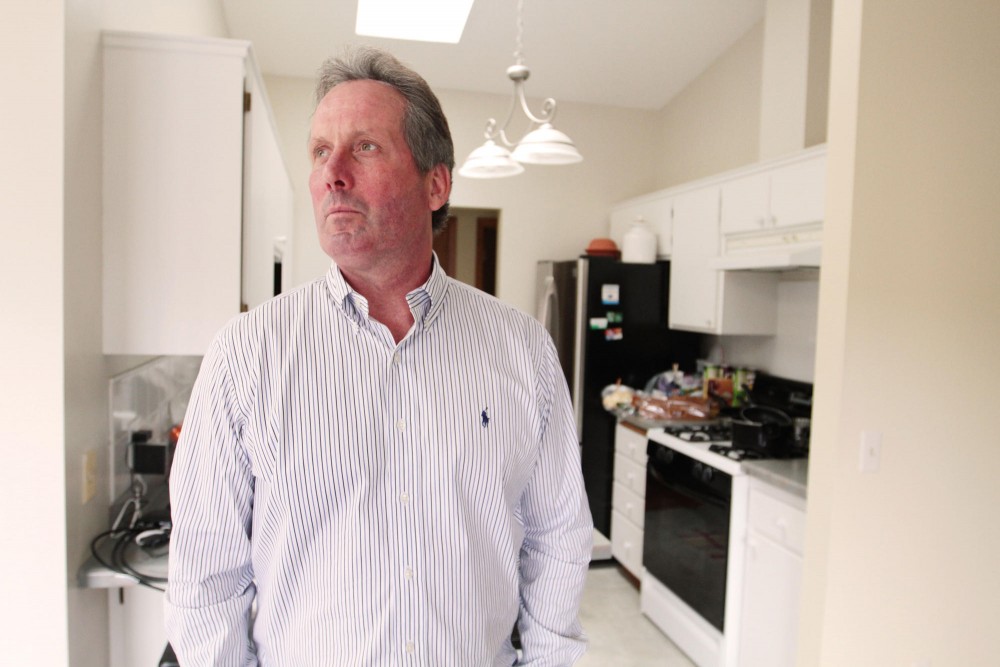 Former Gopher Tim Harrer talks about his years as an All-American hockey player Monday at this house in Bloomington. Today Harrer works for his father's maintenance company.

Tim Harrer leads a relatively quiet life in his hometown. It may come as a surprise, given the fact that heâÄôs seen himself portrayed in Hollywood, starred on the Gophers menâÄôs hockey team in the late âÄô70s and had a brush with one of the most famous teams in American hockey lore.

Recognized as one of the 50 greatest Gophers hockey players in 2001, Harrer grew up in Bloomington, Minn., and was involved in many sports as a kid. Long before Harrer watched himself in the 2004 film âÄúMiracle,âÄù he was growing up in Minnesota with a passion for hockey.

Twenty-five years after retiring, he works with his dad at the familyâÄôs commercial housekeeping company in the Twin Cities. Despite owning the small business, HarrerâÄôs father Dave still had time to coach Tim in baseball and football.

He had no influence on TimâÄôs passion for hockey, though.

âÄúHe was real good in football and baseball but when it came to hockey he sure loved it,âÄù the elder Harrer said. âÄúHe had a real passion for it.âÄù

The sport was popular in his neighborhood, which gave him a place to learn.

âÄú[My brother and I] just loved hockey. … We grew up right next to a park. There were kids everywhere playing,âÄù he said. âÄúMy parents would just come down to the park and yell for dinner or lunch, and weâÄôd just go down to the park and start playing hockey again.âÄù

At 12 years old, Harrer had a leg up on most of the neighborhood competition. He seasoned his game in different traveling leagues and circuits as an adolescent, while dabbling as an employee for ABC Maintenance in his spare time.

Harrer was an all-conference selection as a sophomore in high school at the now-defunct Bloomington Lincoln High School before being named to the all-state team as a junior.

He missed much of his senior year of high school due to a broken ankle, but recovered in time for the state tournament.

When the season wrapped up, Harrer got a call from then-Gophers head coach Herb Brooks offering a scholarship to join Minnesota for the 1976-77 season. He said he didnâÄôt even have to think about it, but just gave Brooks an automatic âÄúyes.âÄù

The transition from high school to college hockey proved to be more difficult than Harrer expected.

âÄúI was kind of an immature kid,âÄù he said. âÄúI was just 155 pounds out of high school and all of a sudden IâÄôm sitting around with the best hockey players in the state.âÄù

But halfway through his freshman year, Harrer became accustomed to the grueling demands of his coach and of hockey at the collegiate level.

âÄúOur practices lasted forever. âÄ¦ The more you practice and the more you play with better players the quicker you improve,âÄù he said. âÄúIf youâÄôre not competitive, you just get weeded out.âÄù

He indeed was competitive, logging ice time in 38 games during his freshman season. He was awarded the teamâÄôs Frank Pond Rookie of the Year Award at yearâÄôs end.

Pro scouts took note of HarrerâÄôs potential, and he was drafted in the ninth round by the Atlanta Flames in the 1977 NHL  draft.

He continued to improve at Minnesota and nearly doubled his point total as a sophomore before becoming a force on the team as a junior.

His junior season (1978-79) was a historic one for Minnesota hockey as well.

Brooks guided the Gophers to a 32-11-1 record en route to a 4-3 victory over North Dakota in the national championship game in his final season as Minnesota head coach.

Harrer logged 28 goals and 25 assists during the season, and remembered the national championship as one of his fondest memories in a Gophers uniform.

Said Harrer: âÄúWinning the national championship was phenomenal. … At the time it was just kind of something you expected, almost, when you go [to Minnesota].âÄù

Brooks left the Gophers prior to the 1979-80 season to coach and prepare the United States national team for the 1980 Winter Olympics.

He brought a number of Gophers with him, including Harrer, to the U.S. Olympic Training Center in Colorado.

Harrer practiced with the Olympic team into his senior season, going back and forth between Team USA and the Gophers.

The saga was depicted in the 2004 film, âÄúMiracle,âÄù starring Kurt Russell. Harrer, however, was ultimately left off the final roster despite having played in four games with Team USA in preparation for the Olympics.

In the movie, he is brought in after the team has bonded and gone through weeks of conditioning. Members of the team told Brooks they didnâÄôt think Harrer belonged because he was brought into camp late.

âÄúI think Herb just made a decision that it wasnâÄôt right [to keep me]. âÄ¦ He just wanted to keep the team together. It wasnâÄôt really fair to all of a sudden bring me in out of the blue and send somebody home thatâÄôs been with the team all year,âÄù Harrer said.

âÄúIn the movie, that was actually very true. Of course I wanted to be on the Olympic team. All my buddies were on it and everybody wants to play for their country.âÄù

After his Olympic experience, Harrer overcame the short-term disappointment and returned to the Gophers to finish his senior year, which was one for the ages.

He scored a school-record 53 goals during the 1979-80 season, a record that still stands today. His 53-goal mark is the fifth highest single season total in college history.

At seasonâÄôs end, he was named the WCHAâÄôs Most Valuable Player, and earned a spot on the All-America First Team.

âÄúIt was a little surprising at first; all of a sudden I started scoring tons of goals. When it happened I was so young I didnâÄôt think much of it. Now that IâÄôm older, I look back at it and itâÄôs a lot more gratifying,âÄù he said with a shy smile.

âÄúI still have a lot of people that talk to me about the records and All-American. When youâÄôre an All-American, it kind of puts you in a fraternity with other All-Americans.âÄù

He bounced between various minor league teams before being called up for a three-game stint with the Calgary Flames during the 1982-83 season.

His short time with the Flames marked the pinnacle of his professional career. He was sent back down to the minors, where he played until retiring in 1985.

Harrer said he was burnt out from playing in the minors for so long, but still enjoyed his time in the professional ranks.

âÄúSometimes I wish I would have stayed in it a little longer and maybe got into scouting or something like that.âÄù

Harrer returned to the University of Minnesota to take classes, and graduated with a degree in general studies with an emphasis on small business.

After finishing school, he worked for Albinson Reprographics, a printing company based in Eden Prairie, Minn., before winding up at Walser Chrysler Plymouth, where he worked as a car salesman with some of his former Gopher teammates.

During his tenure at the car dealership, he started working for his dad at ABC Maintenance, like when he was younger.

âÄúHe really didnâÄôt have any offers to go work anywhere, he didnâÄôt really know what he wanted to do, so he kind of started working in the company part time,âÄù his father said. âÄúPart time turned into full time. Full time turned into doing what heâÄôs doing now.âÄù

At 54, Harrer still stays in touch with some former teammates, but hasnâÄôt played in any menâÄôs leagues following his retirement.

He spends one or two nights each year in Mariucci Arena watching a Gopher hockey game.