MSA and Nutritious U Food Pantry are planning a permanent pantry to open in fall 2017. 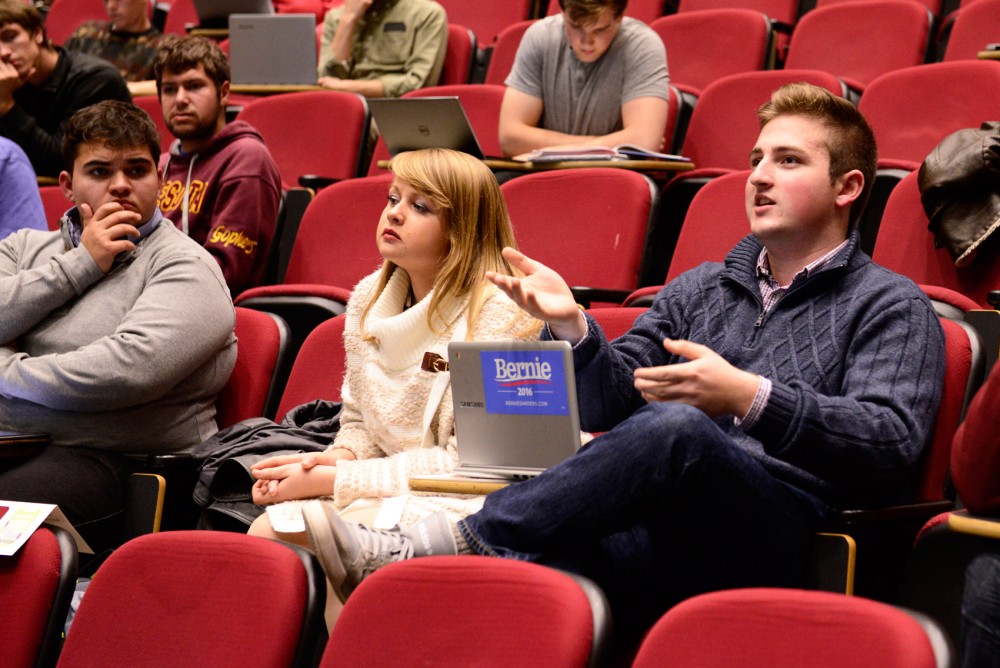 Sophomore Tom Wyatt-Yerka poses a question to Director of Undergraduate Student Initiatives LeeAnn Melin about the undergraduate advising process during the MSA meeting in the Molecular and Cellular Biology building on Tuesday, Oct. 27.

Last spring, Rebecca Leighton was designing a food pantry for a class when results from a Boynton Health survey prompted her to take things further.

More than one in ten students at the University of Minnesota experienced food shortages, and more than one in six worried their food would run out before they could afford to buy more, the 2015 survey found.

Faced with the reality of food insecurity on campus, the second-year graduate student founded the student group Nutritious U Food Pantry. The group has since partnered with Minnesota Student Association, which is funding a project to launch two pilot food pantries this spring. MSA and the group plan to open a permanent one in the fall of 2017.

“They were awarded a Mission Driven Grant because they are someone who we believe really aligned with MSA’s mission,” said MSA president Abeer Syedah.

The first pilot pantry will be open Feb. 20-22 at Appleby Hall, and the second will run March 29-31 at the YMCA on University Avenue. Leighton said she plans for the permanent pantry to be open most week days.

“We really want to change the perception among college students that healthy, fresh food is a luxury,” Leighton said.

Last year, while working with other campus-based food pantries, Leighton learned about the growing trend of food insecurity across college and university campuses around the country. The University of Minnesota is one of two Big Ten schools currently without a food pantry.

As part of her research, Leighton reached out to Michigan State University, which was the first college in the United States to implement an on-campus food pantry in 1993.

Nicole Edmonds, the director for the Michigan State University Food Bank, says she has seen an increase in the number of clients that they serve.

“I can’t really speak to if that is because of a greater increase in food insecurity or a greater awareness that we exist,” said Edmonds. “I have been involved with this food bank since 2012 and I have seen the numbers increase every year.”

Using insight from other schools, Leighton wants to model the Nutritious U Food Pantry after a grocery store.

“We want students to feel more like they are visiting a grocery store in hopes of reducing the stigma,” said Leighton. “We are focusing on providing fresh produce, whole grains, and high quality foods in a choice model.”

A majority of the food for these pilot food pantries will be ordered from The Food Group, a food bank based in New Hope, Minn.