Celebrate the birth of Christ with tasty brews and hot tunes. 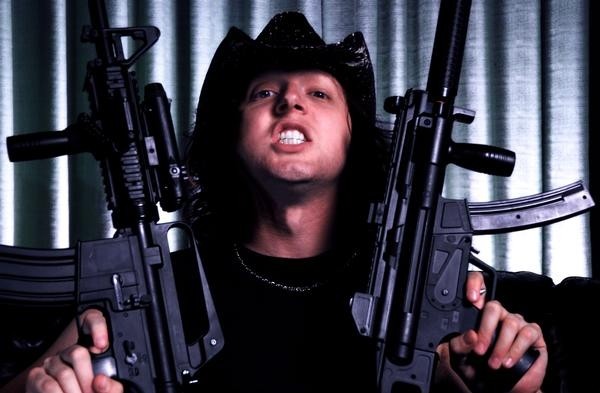 WHAT: Andrew Bird WHEN: 8 p.m., Dec. 10-12 WHERE: St. MarkâÄôs Episcopal Cathedral, 519 Oak Grove St. TICKETS: $29 – $34 Andrew Bird wonâÄôt be playing cuts from his catalogue of adored pop LPs. No, Mr. Bird is performing this trio of church dates as a âÄúGezelligheidâÄù âÄî a Dutch term that loosely translates to âÄúsocial coziness.âÄù That means lush, organic instrumentation with few vocals and possibly fewer whistles. âÄúI want the audience to be both lifted and comforted as we head into another cold and dark winter,âÄù Bird explained, so expect concerts both Mom and hipster approved. WHAT: Heiruspecs, Black Blondie WHEN: 7:30 p.m., Dec. 11 WHERE: The Whole Music Club, 300 Washington Ave. S.E. TICKETS: $7 for students, $10 general ItâÄôs always a good idea to enjoy (relatively) big-time acts when they coast through The Whole. Sure, the motif screams mid-âÄô90s high school sitcom and thereâÄôs no booze to be had, but concertgoers will be a good three feet from Felix and Company as they tear through a careerâÄôs worth of smart, jazzy hip-hop. The Heiruspecs sometimes get lost in the Rhymesayers zaniness of this town, but a chance to see the skilled hip-hopsters close up shouldnâÄôt be missed. WHAT: WAMplified!: Mates of State WHEN: 9 p.m., Dec. 12 WHERE: Weisman Art Museum, 333 East River Road TICKETS: $22 This inaugural late-night event is a layered one. Conceptually, itâÄôs formatted as a music act that has thematic connections with the museumâÄôs most recent major exhibit. So âÄúTo Have It About You: The Dorothy and Herbert Vogel CollectionâÄù must be husband-wife art with sugary synths and over-the-top cuteness. That, or a collection of mainly American, minimalist/conceptual art. Anyway, the ticket gets you food, two drinks and a midnight tour of the exhibit. In keeping with the thematic elements of the evening, thereâÄôs even a video game lounge. WHAT: B96 Homegrown Showcase: Maria Isa, Muja Messiah and Trama WHEN: 9 p.m., Dec. 16 WHERE: The Fine Line Music CafÃ©, 318 First Ave. N. TICKETS: $5 Pretentious skepticism aside, itâÄôs sweet to see a top-40 radio station caring about local music. KDWB âÄôs only contribution to the Twin Cities is playing the same three Prince songs and that god-awful Owl City . That said, Maria Isa oozes charisma, sings like a siren and raps like a polymer plastic film. Muja Messiah is a hometown reppinâÄô, harder-edged emcee, and the event is a measly $5. WHAT: Charlie Parr WHEN: 7 p.m., Dec. 16 WHERE: 331 Club, 331 N.E. 13th Ave. TICKETS: Unknown Those looking for a 360-degree shift from the B96 event a few blocks away, I give you Mr. Charlie Parr. The beard-havinâÄô, hill-person-lookinâÄô Charlie Parr uses his 12-string guitar to carve out the same from-the-gut traditional blues and folk heâÄôs honed for many years and six LPs. Parr is a shy, self-deprecating fatalist, and his music is a gorgeous slab of pure Americana. WHAT: The Great Holiday Cover-up: The Belfast Cowboys, E.L.nO and The Beatles are in Big Trouble WHEN: 8 p.m., Dec. 18 WHERE: First Avenue, 701 First Ave. N. TICKETS: $8 advance, $10 door Everyone loves cover bands! Since Van Morrison , Electric Light Orchestra and The Beatles are too busy/dead to come to the Twin Cities, The Belfast Cowboys, E.L.nO and The Beatles Are in Big Trouble will fill the void, respectively. The best part of a concert is when the band plays a song you know. ItâÄôs why Bachman-Turner Overdrive still exists and why this show will be barrels of drunken, nostalgic fun. WHAT: A Night in the Box, We All Have Hooks for Hands and Total Babe WHEN: 5 p.m., Dec. 19 WHERE: The Triple Rock Social Club, 629 Cedar Ave. TICKETS: $6 This show starts the stellar local music binge at The Triple Rock. The early show is for the indie kids, where a relative gaggle of pups craft hooky pop. In the case of Total Babe, theyâÄôre youthful to the point of still being in high school. A Night in the Box is one of the cityâÄôs finer live acts with plenty of roots music thrashing, and We All Have Hooks for Hands is a massive South Dakota collective of indie poppers. WHAT: Learning Curve Records Showcase X-Mas Party: The Blind Shake, Gay Witch Abortion and Seawhores WHEN: p.m., Dec. 19 WHERE: The Triple Rock Social Club, 629 Cedar Ave. TICKETS: $6 This is the show for the red meat crowd. That is to say, fewer skinny jeans than the early show and lots more gruff beard-sporters. The Blind Shake are salt-of-the-earth, post-punk minimalists; Gay Witch Abortion play wrist-crippling sludge metal, and The Seawhores are scene vets specializing in experimental noise rock. WHAT: The Bad Plus WHEN: 7 p.m. and 9:30 p.m., Dec. 25-27 WHERE: Dakota Jazz Club and Restaurant, 1010 Nicollet Mall TICKETS: $20 – $40 Cost aside, good jazz trumps midnight mass 100 percent of the time. Baby Jesus wants you to appreciate AmericaâÄôs only original art form; heâÄôs anything but petty âÄî even on his birthday. WHAT: The Good Life WHEN: 9 p.m., Dec. 28 WHERE: The Triple Rock Social Club, 629 Cedar Ave. TICKETS: $12 Cursive frontman Tim Kasher has always secretly liked his more organic side project The Good Life better, and thatâÄôs not a bad thing. The Omaha outfit plays textured, complex music with traditional instruments; and KasherâÄôs post-emo screaming fits mixed with pained whispers typically impresses. Twelve bucks is a steal for an underrated songwriter, a cool venue and a scene-point restorer after you kissed up to aunts all Christmas. WHAT: Mark Mallman, White Light Riot and First Communion Afterparty WHEN: 9 p.m., Dec. 31 WHERE: Varsity Theater, 1308 Fourth St. S.E. TICKETS: $12 Mark MallmanâÄôs live show is a coked-out, manic experience. If New YearâÄôs Eve is about indulgence, a Mallman piano-rock show is the perfect fit. White Light RiotâÄôs generic bro-rock sorta blows, and First Communion AfterparyâÄôs neo-hippy bit wears thin, so get loaded at a Dinkytown watering hole until about 10:30 p.m. and revel in MallmanâÄôs cheesy/delightful showmanship.