Gophers set for rematch with No. 6 Spartans

Minnesota will try to avenge a 60-53 loss against Michigan State on Jan. 13. 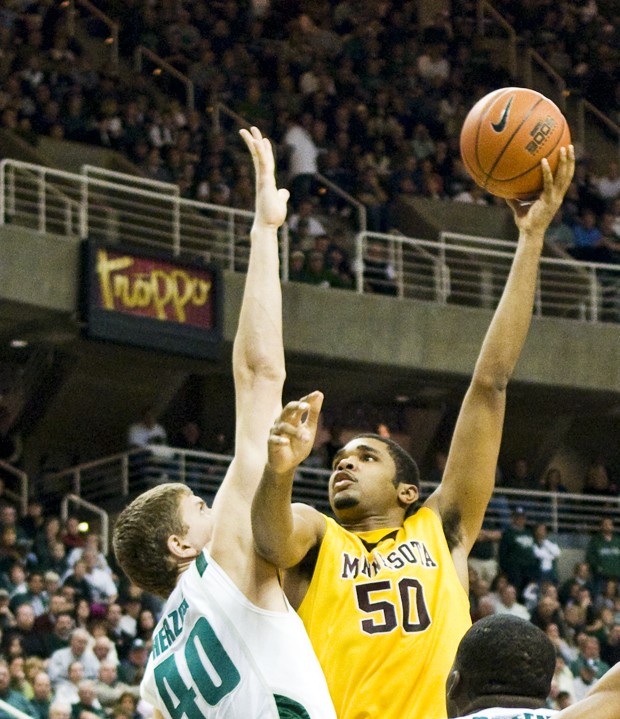 After the Gophers menâÄôs basketball teamâÄôs loss at Michigan State on Jan. 13, senior guard Lawrence Westbrook said the rematch with the Spartans would be a must-win game. With three losses in their last four games, Minnesota (12-6 overall, 3-3 Big Ten) will look to SaturdayâÄôs matchup against No. 6 Michigan State (16-3, 6-0) at Williams Arena as a potential skid-breaker. âÄúOut of all the years [IâÄôve been here] âÄ¦ this is like our best chance to ever beat them, I feel,âÄù Westbrook said after the GophersâÄô second-half rally fell short in a 60-53 loss to the Spartans in East Lansing, Mich., where the Gophers havenâÄôt officially won in 20 years. Following the defeat, Tubby Smith, who has not beaten the Spartans in six tries as MinnesotaâÄôs head coach, said the Gophers need a total team effort to win. His team proved as much in its last two games at Michigan State and Indiana. Against then-No. 7 Michigan State, the senior captains, Westbrook and forward Damian Johnson, did all they could to win. They just didnâÄôt get much help. âÄúWe had some stretches where we let them outwork us,âÄù Johnson said. âÄúAs a team, weâÄôve just got to know how to finish games and execute together. ThatâÄôs going to help us turn the corner and get to the next level.âÄù On paper, Indiana (8-9, 2-3 Big Ten) is at a lower level than Minnesota, but that wasnâÄôt the case during SundayâÄôs 81-78 overtime upset by the Hoosiers. After they combined to score 20 straight points to rally the Gophers in the second half against the Spartans, Westbrook and Johnson combined for just 11 points against Indiana and neither scored after the 13:17 mark of the second half. The Gophers were out-rebounded 43-31 by the lowly Hoosiers, just four days after they had broken even (37 rebounds each) with the Spartans, by far the Big Ten leaders in rebounding margin. Minnesota stayed in the game at Indiana because of 19 points from sophomore guard Devoe Joseph , 17 points from sophomore center Ralph Sampson III and a nine-point, 10-rebound effort from junior forward Paul Carter. Johnson committed two early fouls and had to sit out the final 16:38 of the first half. Sampson and Carter both fouled out in overtime. Minnesota overcame an 11-point deficit in the final six minutes of regulation but squandered a five-point lead in the last three minutes of overtime. The consequences of those mistakes could be even uglier against a deep Michigan State team. Five Spartans âÄî including two who often come off the bench âÄî were averaging at least 10 points per game entering WednesdayâÄôs game against Iowa. Junior guard Kalin Lucas âÄô team-leading 14 points âÄî including four free throws in the final minute âÄî against the Gophers marked the 28th straight game in which he scored in double digits. âÄúWe kind of had them quiet for a while, but good players are going to find a way,âÄù Smith said. âÄúThey have so much balance in their lineup. There are a lot of people that can beat you.âÄù The Spartans defeated Iowa on Wednesday night, sweeping two games in 12 days from the Hawkeyes. Saturday will mark the second matchup in 11 days between Michigan State and Minnesota, and Spartans coach Tom Izzo said there is a possible danger of taking an opponent more lightly the second time around. âÄúWhen you play [a team twice in a short time], I think itâÄôs harder on the team that won the [first] game, because complacency is what happens in all [parts] of life,âÄù Izzo said. In the first game, the Gophers were able to execute most of their game plan, including solid defense that held the Spartans to their lowest shooting percentage and second-half point total of the season. But Michigan State still came through in crunch time. âÄúYou can tell thatâÄôs a winning team,âÄù Johnson said. âÄúThey make winning plays at the end, and thatâÄôs what got them the [win against us].âÄù