A grant will let a U center create a new app to let more immigrants tell their stories. 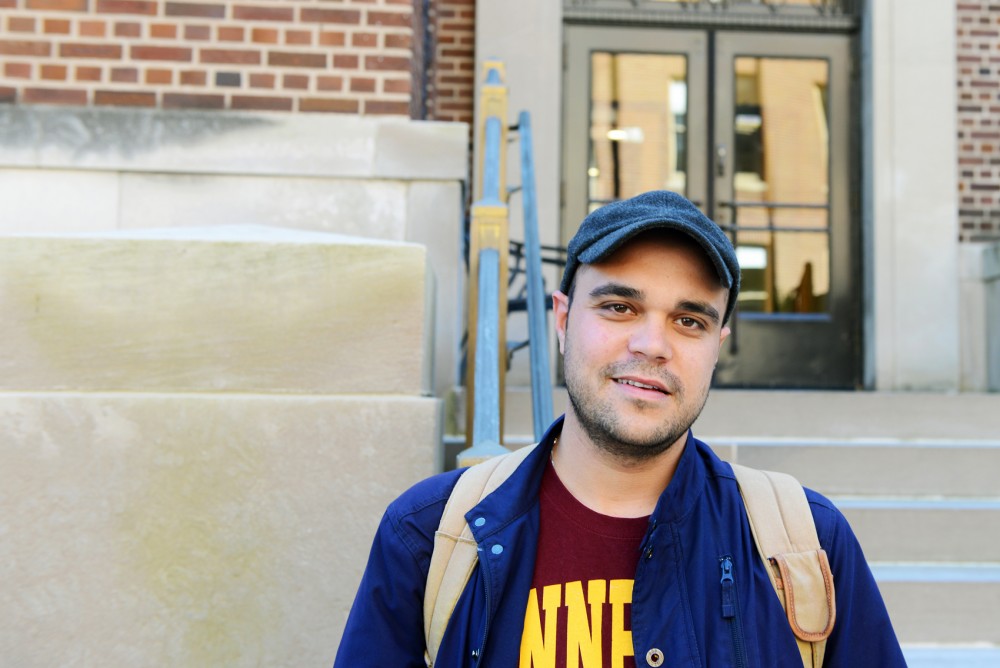 Sophomore Thiago Heilman stands outside of Murphy Hall Wednesday afternoon. Heilman is an immigrant from Brazil who came to the U.S. as an undocumented child and was unable to attend university until President Obama passed the law Deferred Action for Childhood Arrivals (DACA) in 2012.

Raju Chaduvula
Thiago Heilman first came to the United States from Brazil 20 years ago. The undeclared University of Minnesota sophomore remained undocumented until 2012, when President Obama announced undocumented immigrants who came to the U.S. as children under 16 would not be deported.
He first shared his story earlier this year with the University’s Immigration History Research Center, which has been collecting stories from local immigrants for two years.
This summer, the center was awarded a $324,000 grant from the National Endowment for the Humanities to take the Immigrant Stories project nationwide with an app that the center’s staff hope will allow more immigrants to share their stories.
Erika Lee became the director of the IHRC in 2012 and created the Immigrant Stories project to allow refugees and immigrants in the Twin Cities to share their stories using digital technology.
When Lee took over, she realized that the immigrant stories archived at IHRC were filled with stories from around the time of World War I and the early 20th century. She said she thought using digital technology would be an accessible way for today’s immigrants and refugees to share their stories.
“I realized that there was a need to be addressed,” Lee said.
She said discussions on immigration and refugees coming to America are often one-sided instead of being a collaborative conversation.
“The immigrants themselves have been lost in these conversations,” she said.
By using digital technology, Lee was able to create a project that allowed immigrants and refugees to share their stories as well as any pictures or videos they may have.
In 2013, only six stories were created, Lee said. Now, there are over 150 stories by students and community members who are refugees or immigrants.
Heilman first took part in the project when he took Lee’s class on immigration history. In his story, he talks about his life as an undocumented immigrant.
“That was the main part of my story — how I waited 16 years as undocumented and was unable to do anything,” he said.
Mai Tong Yang, a 2014 University graduate, uploaded her story to the project last year.
Yang, who emigrated from a refugee camp in Thailand, was a research assistant on the project and saw the potential it had for telling stories.
Her own story is about her life as both a refugee and an immigrant to America.
Both Yang and Heilman said the Immigrant Stories project is important to the efforts to awareness about the issues immigrants face.
Heilman said the Immigrant Stories project will be useful to help future generations learn about the past.
Yang said the new app will only make things easier for people who want to share their experience. The app will allow the IHRC to ensure the project reaches more people.
Lee said the app will improve upon the project’s efforts to make discussions on immigration more reciprocal. She also said anyone, like veterans or senior citizens who want to tell their story, can use the app as well.
“You don’t have to go to a museum to learn about [immigrant stories],” Heilman said.
Delete Image
Align Left
Align Center
Align Right
Align Left
Align Center
Delete Heading