Former U student is on ballot for president

Dean Morstad will be on the state ballot as an independent. 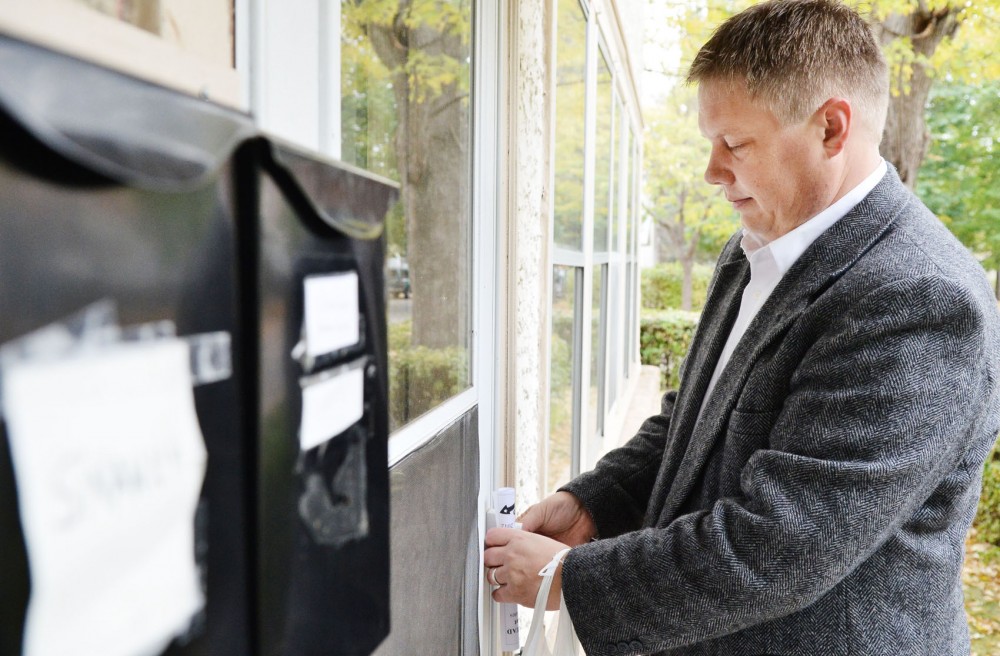 This fall, former University of Minnesota student Dean Morstad will be on the same presidential ballot as President Barack Obama and Gov. Mitt Romney. The similarities end there.

While Obama and Romney debate each other in expensive suits, Morstad goes door-to-door getting out his name in a $5 suit coat he said he bought at Goodwill.

Morstad, 37, works as a project manager at Capella University in Minneapolis. He is also chairman for Love Lines, a 24-hour Christian crisis counseling ministry.

He said he doesn’t take any days off from campaigning, including weekends.

Last Sunday morning, Morstad was out in Northeast Minneapolis distributing literature to houses. He said that’s a typical weekend morning for him.

Though he’s his own campaign manager, Morstad counts a small group of volunteers among his staff, like his neighbor Alexis Drew, 11, who helped him Sunday.

Drew knocked on his door asking to help him as soon as she found out he was running for president.

She said she’s learning a lot about the political process and might even have political aspirations in the distant future.

“It’s good to know what I’ll have to do if I run for president one day,” she said.

Morstad’s other volunteers include his running mate, high school classmate Joshua Franke-Hyland and a friend who runs a campaign office for Morstad in Arizona.

Franke-Hyland is an individual ready reserve soldier living in Texas who heard about Morstad’s campaign while serving in Afghanistan. He said he’d run alongside Morstad again if asked in 2016.

“I’m happy to be able to support a friend,” he said. “It’s an opportunity to be involved in the election process in a way I never normally would’ve done.”

Despite the campaign’s efforts to get on the ballot in Utah and Iowa, Minnesota remains the only state Morstad will be on the ballot, although write-in eligibility efforts continue.

Morstad’s platform centers on reducing the size of the government.

He said many government departments could be best run by the states and keeps a list on his website of federal departments like the U.S. Department of Education he would eliminate if elected.

Morstad’s running for president as an independent because he thinks more individual voices should be heard in politics.

“Let’s get more Americans talking in the national realm at an individual level instead of letting our voices be diluted into these parties that don’t really represent [us],” he said.

He said he saw this type of dilution firsthand as a young delegate in the state Republican caucus.

After struggling to find a current presidential candidate he could identify with, he decided to collect the required 2,000 signatures to get on the ballot.

Though Minnesotans can vote for him, Morstad said he knows he likely won’t become the next president.

“I can’t say that it is technically impossible for me to win,” he said, “but I don’t delude myself into thinking or imagining that that would ever happen.”

But despite the slim odds, he said he at least hopes his efforts motivate others to get their ideas heard.

“I hope I do inspire more people to realize that you don’t need a million dollar campaign,” he said. “You don’t need the nomination of a party [to run for president].”

Although Morstad said his wife is looking forward to Election Day so he’s done campaigning, he said he might run for president again in 2016.

“I just have the concern for America and the Americans that are struggling right now that I want to stand up and say that the direction America is taking is wrong.”