Throughout the research, the UMN team may have discovered a new species of parasitic fly. 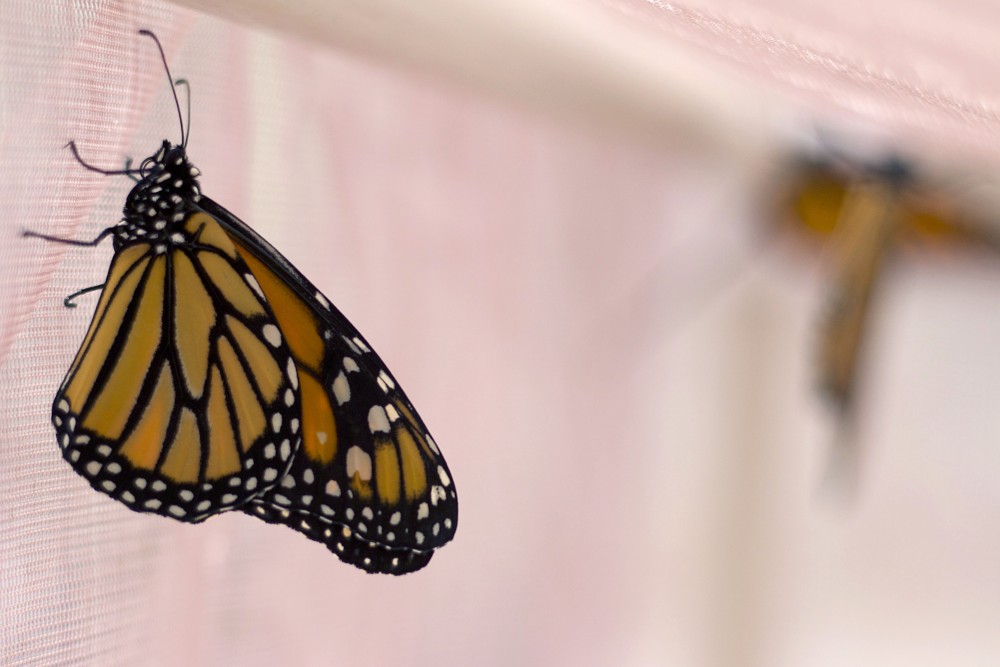 Monarch butterflies are seen in a mating tent on Thursday, July 20, 2017 in Green Hall in St. Paul. The Conservation Corps, who run the Monarch Joint Venture, are focusing on breeding monarchs for education purposes in the fall.

For monarch caterpillars, the world of horror movies is all too real.

Killer parasitoids live and grow inside their bodies, then burst from their lifeless corpses.

This gruesome relationship has been unexplored on a large scale, but a recent University of Minnesota study at the Monarch Lab has started to uncover the extent of the fatal pairing.

Laura Lukens, co-author of the study and senior Monarch Lab technician, is among those learning the natural mortality rate of the species, which includes death by parasitoids. If they know how fast the caterpillars die, she said they can better understand what caused the dramatic drop in the monarch population — a 90 percent reduction since the ‘90s.

“We know there are a variety of threats,” Lukens said. “Most scientists agree that the biggest cause of this decline is habitat loss.”

The academic journal Annals of the Entomological Society of America published their findings July 10.

In order to explore the species’ mortality rate, the Monarch Lab used their citizen science initiative, the Monarch Larva Monitoring Project. With an army of hundreds of volunteers, the lab collected data on thousands of caterpillars.

Citizen scientists collected and raised each caterpillar throughout its lifespan.

A beautiful butterfly can emerge from a chrysalis — the butterfly version of a cocoon — but sometimes maggots eat their way out or disease kills the bugs.

Whatever the outcome, citizen scientists kept track and sent results and fly specimens back to Minneapolis researchers.

With that data in hand, workers in the lab identified the different parasitoid fly species that prey on monarchs and calculate the percent of deaths due to the flies.

“It’s impossible to collect that kind of data without the contributions of that many people. The impact the citizen scientists can make is really, really significant,” Lukens said.

Their study found parasitoids killed almost 10 percent of all the collected caterpillars, but the most interesting finding was the numerous species of culprits.

What the team thought was a single species of parasitic fly might be many, said John Stireman, co-author of the paper and professor of biology in Wright State University. The team is analyzing DNA to identify differences in the supposed species.

They also recorded the first case of “multiparasitism,” where more than one fly species emerged from a single caterpillar, Lukens said.

“It gives us a new understanding of monarch larval ecology,” Lukens said.

One of the flies that emerged might even be entirely new in the world of science, Stireman said.

“[It] doesn’t seem to match any known species in the genus it’s in,” he said.

He said they plan to look more at museum collections and others’ research to find any matches.

Since 1997, the Monarch Lab has fostered the Monarch Larva Monitoring Project, but citizen scientists have aided research on the butterflies long before that.

While butterflies are relatively unimportant ecologically, they are one of the most followed species.

“In terms of nature watching, butterflies are second only to birds, in terms of engagement … they’re beautiful and they’re showy,” said Leslie Ries, assistant professor of biology at Georgetown University.

Ries, who researches citizen science on monarchs, said citizens have studied monarchs since the ‘40s, serving a critical role in understanding various aspects of monarch conservation and biology.

Studies like the Monarch Lab’s would not be possible without the citizen scientists, she said. The geographic distribution and scope of the project is just too large.

For citizen scientists, a passion for nature often inspires them to get involved.

Ilse Gebhard, a retired chemist from Michigan and contributor to the study, started helping after witnessing a fascinating transformation.

She found a chrysalis and brought it into her house. After watching a butterfly emerge, she became fascinated and began to participate in citizen science projects like the MLMP.

She has raised monarchs since 1998 and contributed a large percentage of the study’s fly specimens.

Gebhard now has over a hundred species of plants in her backyard to attract insects like butterflies.

“All the data that was collected for this paper came from citizen scientists, people like me who just do this for … a hobby,” she said.