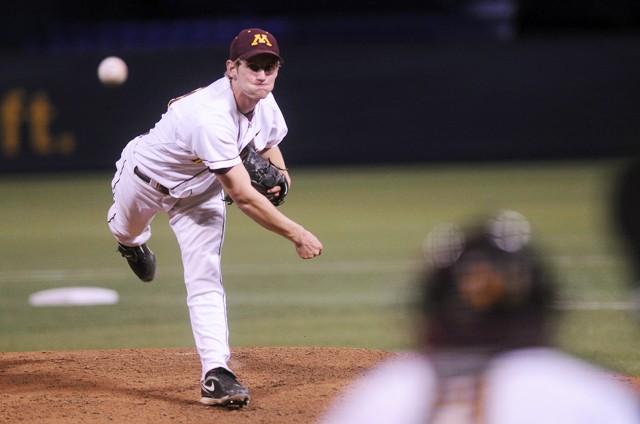 Suddenly, the Minnesota baseball team has become a run-scoring machine. The once stagnant offense continued to produce Tuesday night as the Gophers beat Hamline 10-3. Minnesota has now won three consecutive games, averaging 11 runs per game during the stretch. âÄúIt shows you that some of the younger hitters are starting to figure it out,âÄù Minnesota head coach John Anderson said. âÄúObviously, hitting can be contagious, and as you start to hit throughout the lineup the confidence continues to build.âÄù Minnesota had 11 different players reach base, nine collect hits and seven with at least one RBI. The GophersâÄô offense continues to produce top to bottom, as it did at the end of the Purdue series last weekend. Despite the high run total, the only Gophers player with more than one hit was sophomore Troy Larson, who is becoming a fixture at the leadoff spot. He finished the night 2-for-4 with two RBIs and two runs scored. âÄúIt feels good,âÄù Larson said. âÄúEarlier in the year we were having problems bringing home runners in scoring position, but in the last few games that hasnâÄôt been a problem. ItâÄôs nice that weâÄôre getting big at-bats and bringing in runs.âÄù The Gophers started the scoring Tuesday in the bottom of the first inning as Andy Henkemeyer legged out a triple and later scored on an RBI groundout by Michael Kvasnicka. The scoring continued for the Gophers in the second inning as they began scoring in bunches. With the bases loaded and no outs, Ethan Liederman connected for a two-run single. Larson followed that with a triple to left field that plated two more runs. Henkemeyer later brought Larson home on a sacrifice fly, giving Minnesota a 7-0 lead. The Pipers struck back for a pair of runs in the top of the third as Minnesota starter Kevin Kray walked the first two batters of the inning. Both runners eventually came around to score, one of which was unearned following an error by Liederman in right field. Hamline then cut the GophersâÄô lead down to 7-3 as Jacob Dahl led off the fourth inning with a solo home run off Minnesota reliever Scott Fern. The Gophers got back on the scoreboard in the bottom of the sixth as Nick OâÄôShea smashed a deep solo shot to left field. The runs continued to come in for Minnesota as AJ Pettersen, who had the night off as starting second baseman, delivered a pinch-hit single that scored two more runs, extending the lead back to seven and the eventual final, 10-3. The runs proved to be more than enough as the Minnesota bullpen shut down the Pipers to end the game. âÄúObviously, having success brings confidence,âÄù Anderson said. âÄúI think we have a little more bounce in our step, IâÄôm starting to see players playing a little more relaxed, not trying so hard and just letting it happen.âÄù