The professionally directed, newly devised work will have you thinking about life, man. 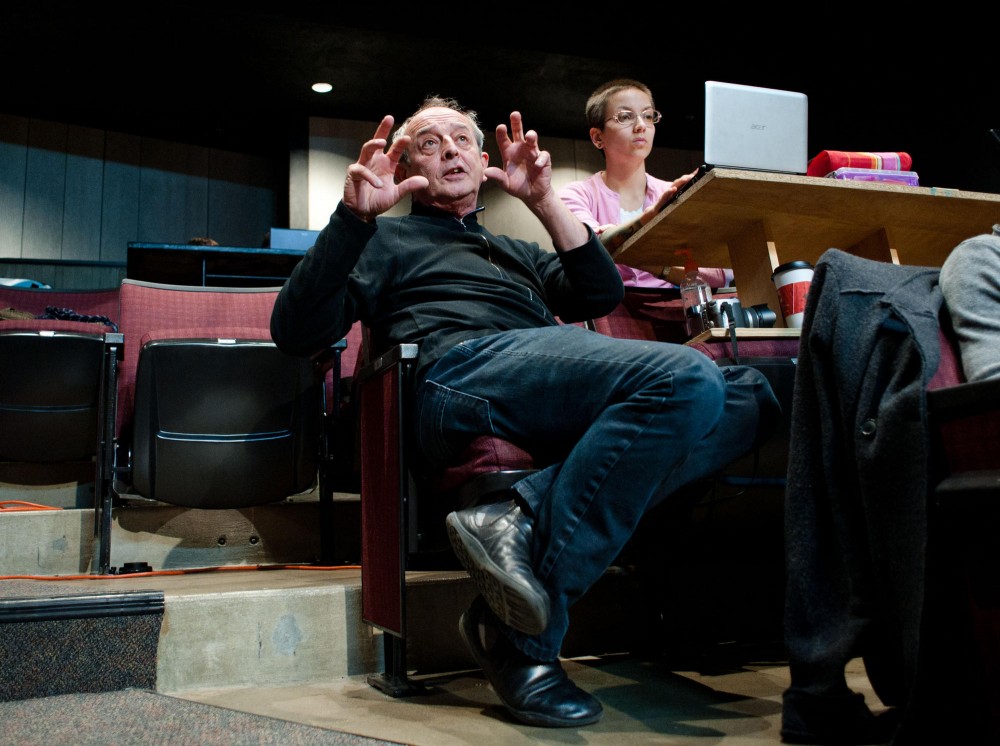 Cost: $5 for any student with any school ID, $10 for non-students

Unscripted performances at the Rarig Center tend to be minimal ordeals that focus more heavily on concepts than razzle dazzle. The devised collaborations put on every year in the department, usually crafted by students and professors, donâÄôt need ostentatious stage tricks âÄî the magic ingredients are hard-working actors and creative juice.

That formula has worked just fine, and the University of MinnesotaâÄôs inventive works have been refreshing departures from the gimmicky nature of some more high-budget productions. Still, thereâÄôs something to be said for pouring money and international talent into the mix.

The departmentâÄôs newest production, âÄúThe War Within/AllâÄôs FairâÄù exemplifies this. At its heart, this theatrical examination of how we handle modern life is a student-driven affair, but it has received a financial boost from the department. Last year, students in the undergraduate theater program presented the case for a devised work that would break the mold. They wanted to create their own production from scratch but with a professional company. Their request was accepted and âÄúThe War WithinâÄù was put on the season calendar.

The Moving Company, which specializes in unconventional work, was the natural companion for this student-initiated project. Dominique Serrand and Steven Epp, legends known for their work on the late Theatre de la Jeune Lune, have embraced the students.

The Moving Company will take a second shot at âÄúThe War WithinâÄù at the Southern Theater in 2012, but for now, Serrand and Epp are taking advantage of working with University students.

âÄúWith professional actors, you always work in a producing system where you have to deliver. With students, you have time to research, to rethink,âÄù Serrand said.

ItâÄôs a two-way street: The theater students are just as geeked about working with the internationally-acclaimed actors.

âÄúThese are artists IâÄôve aspired to my whole life, and now IâÄôm working with them,âÄù said Peter Rusk, a theater senior. Actors played a large role in devising the work, improvising and exploring until they found things that worked.

âÄúAt the beginning of the process, we had almost nothing except for the title,âÄù Rusk said.

The title comes from the overarching theme of the play, that war pervades our society on every level. It manifests itself in every facet of American life: From the mundane and menial to the national and magnificent, we face each other and ourselves in endless battles.

From the platform of the title, which Serrand compared to the name of a military operation or the name of a hurricane, actors and directors built a production that explores the ridiculousness of modern life in a light-hearted, absurdist fashion. In one scene, a tiny office squabble turns into a monumentally bizarre clash involving a clothing iron, a monster spitball and several aggravated assaults with a potted plant.

âÄúThis show is a completely different animal,âÄù said Laura Abend, a theater senior. As stage manager, Abend was in charge of, among other things, recording every aspect of the devising process. With her assistant stage managers, Abend made up for the scriptless nature of the show.

Because a script has never been written, itâÄôs hard to say what the show is âÄúaboutâÄù exactly. Threads of a story will weave in and out in a fabric that will feel a little bit different to everyone.

âÄúThereâÄôs not a big agenda. ItâÄôs not around one issue. It ends up getting at something essential about where weâÄôre at today âÄî as a country, as society, as individuals,âÄù Epp said.

âÄúItâÄôs about life, but not in that horribly clichÃ© way,âÄù Rusk said. âÄúWeâÄôre not telling you how to live. WeâÄôre just looking at how we live.âÄù

To create the stageâÄôs look, design students worked with the directors to come up with lighting, scenic and costume designs that fit with the themes of the work.

As opposed to traditional theatrical lighting, which softens makeup-caked actors in flattering light that changes color and intensity on every emotional whim, the lighting designer of âÄúThe War Within,âÄù Jesse Cogswell, hit actors with the harsh light of modern life. Fluorescent bars hang high in the theatrical canopy. TheyâÄôre complemented by a hazy amber glow that explicitly evokes parking garages and street lights.

Set designer Amanda Wambach, a third-year in the scenic design MasterâÄôs program, has drawn from the buildingâÄôs natural architecture to create a stage that is a continuation of the brutalist, utilitarian thrust space. She also disturbed the natural landscape of the space, placing a cigarette machine in the audience and blocking off an entire section of the balcony with an austere, concrete alpine slope of walls whose gray paint job matches the concrete walls of the theater. Upon these walls, a hodgepodge of trippy images and video will be projected.

âÄúThere are sections that seem so familiar âÄ¦ Together, they donâÄôt really make sense. ThereâÄôs something very disjointing about it. It throws us,âÄù said theater senior Sam Kruger in regards to the acting space, which is populated by office furniture. âÄúIt puts you in a stranger place as an audience member.âÄù

Actors and designers alike had to learn how to take risks in order to achieve maximum theatrical success. âÄúFailure is essential to the process,âÄù Rusk said.

âÄúIn an odd way, itâÄôs sort of like fishing. Or some metaphor that has to do with patience and focus,âÄù Kruger said.